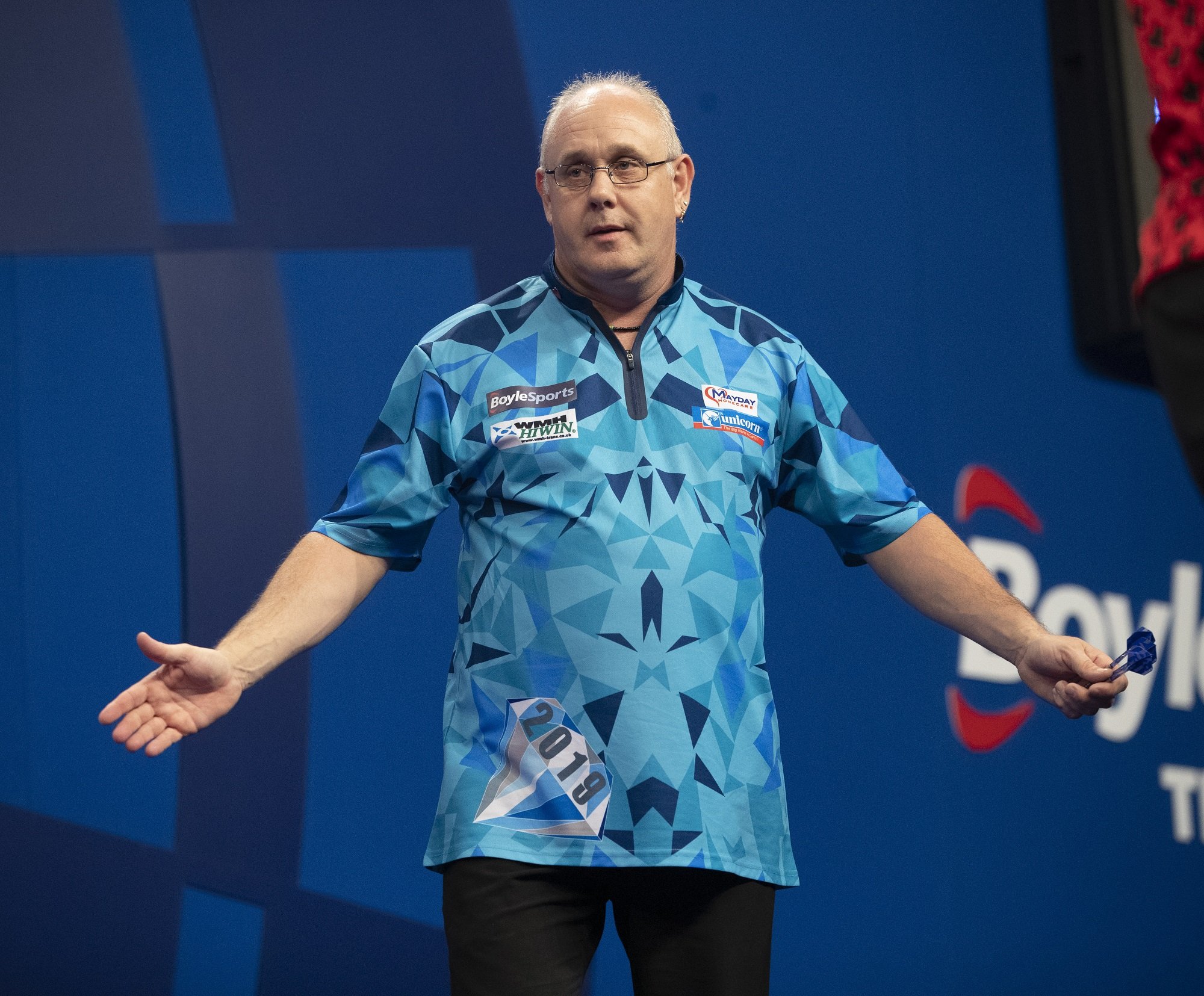 Ian White returned to the winner’s circle as he claimed his first PDC title in almost a year with an 8-3 victory over James Wade to win Players Championship Eight at the Barnsley Metrodome.

On a day surrounded by upsets, controversy and non-tour card holders entering the fray due to withdrawals, it was a well-known winner who reigned victorious.

White, who will celebrate his half century in a few months time, threw some scintillating stuff throughout a blistering streak of showings in Barnsley, surpassing the 100 mark in terms of his average in six of his seven matches.

‘Diamond’ White got his campaign on the road in coming from behind to defeat Scotland’s William Borland, before overturning the outcome once again – this time against a brilliant Brazilian in Diogo Portela.

He then continued a scintillating string of showings in averaging 111.3 on his way to ousting Premier League challenger John Henderson and pinning a terrific 144 checkout to seal his place in the last eight with a 6-2 win over Stephen Bunting.

?@IanDiamondWhite is on absolute fire today. Tbf he’s been superb in PC events since PC5 with match averages of:

Is anyone stopping him today? #PC8 #PDCProTour

White subsequently overturned a 3-1 deficit to defeat a returning to form Dave Chisnall, clocking a 109.7 average in the process, before producing his poorest performance of the tournament in booking his place in the final with victory over Kim Huybrechts.

Meanwhile, Wade was also in breathtaking form throughout the duration in Barnsley, registering three ton-topping averages en route to his first final since September.

His campaign commenced with a 6-3 victory over Dutchman Wesley Harms, before producing successive ton-plus averages in denying both Ciaran Teehan and Jason Lowe.

The pressure was then mounted on the shoulders of Wade in the fourth round against Josh Payne, with the former World Youth Championship finalist racing into a 3-1 lead. However, fabulous finishes of 116 and 134 led to the 36-year-old turning the tables and therefore clinching his place in the quarter-finals.

Comfortable victories over Keegan Brown and surprise package Derk Telnekes followed for Wade as he set up a final showdown with a wonderful White.

Wade immediately got off the mark in punishing missed doubles from a normally prolific White – who squandered four darts at the outer ring in the opening leg of the final.

White responded with a comfortable hold of throw, pinning a two-dart 80 checkout, before turning the tie in his favour with a second successive 14-darter.

He then extended his advantage, only for his doubling to elude him once again as he handed Wade a chance at an 80 checkout, with ‘The Machine’ resultantly halving the deficit.

White subsequently nailed his second 71 outshot of the final to move 4-2 ahead, before pinning double eight to move three legs adrift of a visibly disappointed multiple-time major champion.

The Stoke-on-Trent thrower then continued his rout with a 98 outshot, only for Wade to threaten the nine-darter prior to pinning his favoured double tops.

However, the luck stopped there for the 36-year-old as White found double 16 for a blistering 105 checkout, before landing the above double to get his hands on the winner’s cheque.

What can we say about today, the performance was absolutely superb from @IanDiamondWhite overall superb weekend a joy to watch and be a part of #PC8

White said: “I’ve been playing good darts throughout the year but not been getting the luck so this title has been coming. The form is coming on, I’ve had a few problems but I’m sorting myself out and everything is going well.

“A couple of weeks ago Peter Wright was hitting lots of 100-plus averages so that spurred me on to keep up with him.”

He added: “Everyone goes on about my TV form not being as good as my ProTour form but I play good darts on the TV stages, I’ve hit averages over 100. I’ve just ran into top class players at their best a few times, I just think I’ve been unlucky. My heads on this year and I want to stay in that top 10.”

Both Wade and White were in sensational form on Saturday also, posting four ton-plus averages apiece, before falling short in the latter stages of the tournament.

Saturday’s eventual champion Nathan Aspinall was ousted in the first round on Sunday at the hands of Latvian number one Madars Razma, while the opening hurdle also claimed the scalp of recent UK Open champion Michael van Gerwen.

Van Gerwen endured defeat against Aspinall in Saturday’s quarter-finals, before being ousted in round one against fellow countryman Maik Kuivenhoven – who pinned a timely 14-darter in the deciding leg against the world number one.

Rob Cross and Daryl Gurney were both beaten in the third round – a round prior to reigning world champion Peter Wright being whitewashed by Kim Huybrechts – who embarked on a run to his first semi-final in almost two years.

Premier League table-topper and three-time world champion Glen Durrant also made his departure in the fourth round, as did recent Premier League challenger Stephen Bunting and the resurgent Justin Pipe.

Derk Telnekes acted as the weekend’s surprise package. After defeating both Wright and Anderson on Saturday, the Dutchman added Steve Beaton to his haul of world champion scalps, before beating Graham Usher, Dirk van Duijvenbode, Gavin Carlin and Luke Woodhouse to reach his first professional semi-final.

There was also a host of amateur participants at the Barnsley Metrodome following the withdrawal of many tour card holders due to current worldwide health concerns. Scott Mitchell, Carl Hamilton and Bristol’s Dom Taylor represented the Challenge Tour with great aplomb, reaching the third round.

Today's #PC8 was the 350th PDC Players Championship. Phil Taylor still way ahead at the top on 45 wins. #LoveTheDarts #PDCProTour

PDC ProTour action will resume in a fortnights time as the newly added Milton Keynes Players Championship double-header takes place in order to fill the gap left by the postponed European Darts Open due to the ongoing coronavirus outbreak.