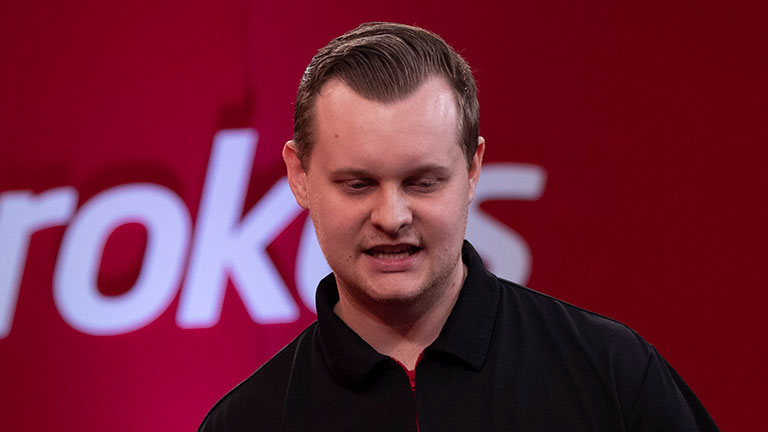 Dutchmen Kevin Doets and Damian Mol both won their first Development Tour titles in Barnsley as the PDC’s youth circuit returned after seven months away.

This weekend will see six events followed by the World Youth Championship as Tour Cards and places in the season-ending World Championship are decided on Sunday.

The first two of them took place on Friday with more than 200 entrants.

In Event Five, there were notable early exits for the likes of Berry van Peer, Ted Evetts and Martin Schindler, while Ryan Meikle averaged 101 in a 4-1 win over Keith O’Neill and Rhys Griffin put out William Borland in a high-quality encounter.

Order of Merit leader Meikle lost in the last 32 along with Geert Nentjes, while Niels Zonneveld and Brian Raman were eliminated a round later.

That left a quarter-final line-up consisting of well-known stars Adam Gawlas and Keane Barry as well as the slightly less-heralded, but very capable duo of Henk Snijder and Lewis Pride.

The latter two were beaten in the last eight by Barry and Gawlas respectively, while Doets and Griffin also made their way through to the semi-finals.

It was a closely-fought final, but after it went all the way, Doets produced a 15-darter on throw to deny the Irishman’s 94 average and win his maiden Development Tour title.

Almost immediately, Event Six got underway, and Doets came back down to earth quickly after falling to defeat to Jarred Cole in his first game.

Zonneveld, Nathan Rafferty and Callan Rydz were also early casualties as Bradley Brooks caught the eye with a 103 average in a 4-1 success against Scott Hope.

Evetts and Meikle, who have dominated the Development Tour over the last couple of years, were both progressing nicely, while Barry continued his fine day with a superb win against Dom Taylor in the last 32, eventually losing to ‘Superted’.

Griffin and Pride also completed good returns, losing in the last 16 of Event Six, as the aforementioned Evetts and Meikle had very different fortunes in the quarter-finals.

‘The Barber’ whitewashed Lewis Gurney, while the Warwickshire thrower fell to a 5-2 defeat to Keelan Kay despite averaging more than the JDC product.

International stars Sebastian Białecki of Poland and Italy’s Marcus Brambati met in the last eight, with the Pole reaching his second Development Tour semi-final of 2020 courtesy of a 5-1 success.

Lewy Williams, who enjoyed a fantastic run at the UK Open, lost out to Mol 5-4. In the last four, Mol edged out Białecki by the same scoreline and Kay beat Meikle 5-3 to deny him a shot at a third title of 2020.

The final wasn’t quite as high-quality as Event Five, but that was to be expected with two events in one day. Mol surged into a 4-0 lead, eventually completing a 5-3 victory to make it a Dutch double and place himself very nicely for the lucrative prizes on offer come Sunday evening.