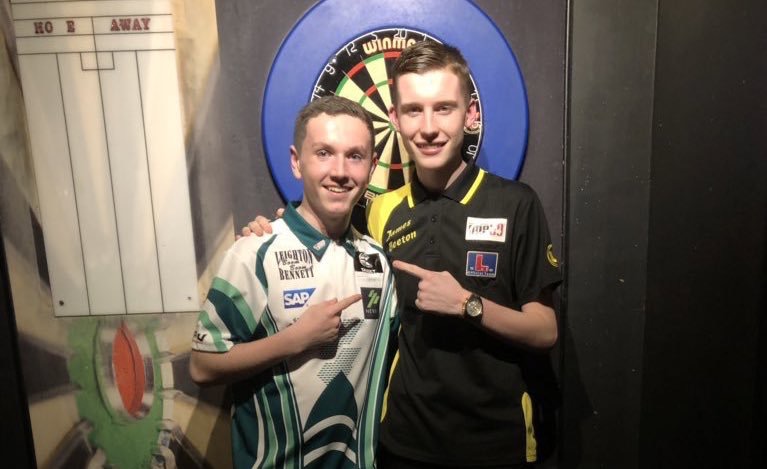 Leighton Bennett continued his delightful start to 2019 as he denied James Beeton in both JDC Junior Darts Tour finals on Saturday at Riley’s Solihull.

After lifting the BDO World Youth Championship crown in January, 13-year-old Bennett has embarked on a JDC dominance, winning four of six events played so far this year.

Bennett dismantled Callum Cross, Jordon Ward and Reece Pauling en route to the quarter-finals, before wins over a valiant Kyle Manton and Alfie Jacques put the Lincolnshire ace into yet another final.

The Cambridge Open champion whitewashed James Beeton, who has been making huge strides on the BDO scene this year, in the final 5-0 to claim his third JDC title. Bennett averaged 85.4 in an impressive showing in the final.

‘Boom Boom’ has struggled to emulate his form from Saturday’s opening event into the second, but did so in Solihull, as he breezed through once again to lift his fourth JDC crown in as many months.

Bennett got off to a flying start in the second event, as reeled off nine legs in succession to defeat Liam Brown, Liam Butler and Mitchell Leeming. He produced a scintillating 104.9 average in his opening whitewashing of Brown.

A narrow victory over Alfie Jacques followed, before 95+ averages over Reece Pauling and James Beeton sealed the deal for the Lincolnshire thrower.

The opening two legs went with throw, before World Youth Champion, Bennett, took out 320 in six darts to open up a 2-1 lead. An 11-dart leg handed Bennett a two leg advantage, only for Cheshire’s Beeton claimed the next two to level up proceedings at three-a-piece.

But – from there – Bennett snapped into gear and legs of 16 and 12 darts sealed the deal for the 13-year-old darting sensation. He clinched his fourth Junior Darts Tour crown at Riley’s Solihull with a 121 outshot, and that would have brought back a memory or two, with that being the checkout that won him a world title.

Both Beeton and Bennett now stand in good stead of being the top two seeds in Gibraltar later this year at the JDC World Championship, following the pair’s dominance and friendly rivalry they are currently forming.

The Junior Darts Tour will resume in just over a month’s time on April 27 at Riley’s in Chorlton.