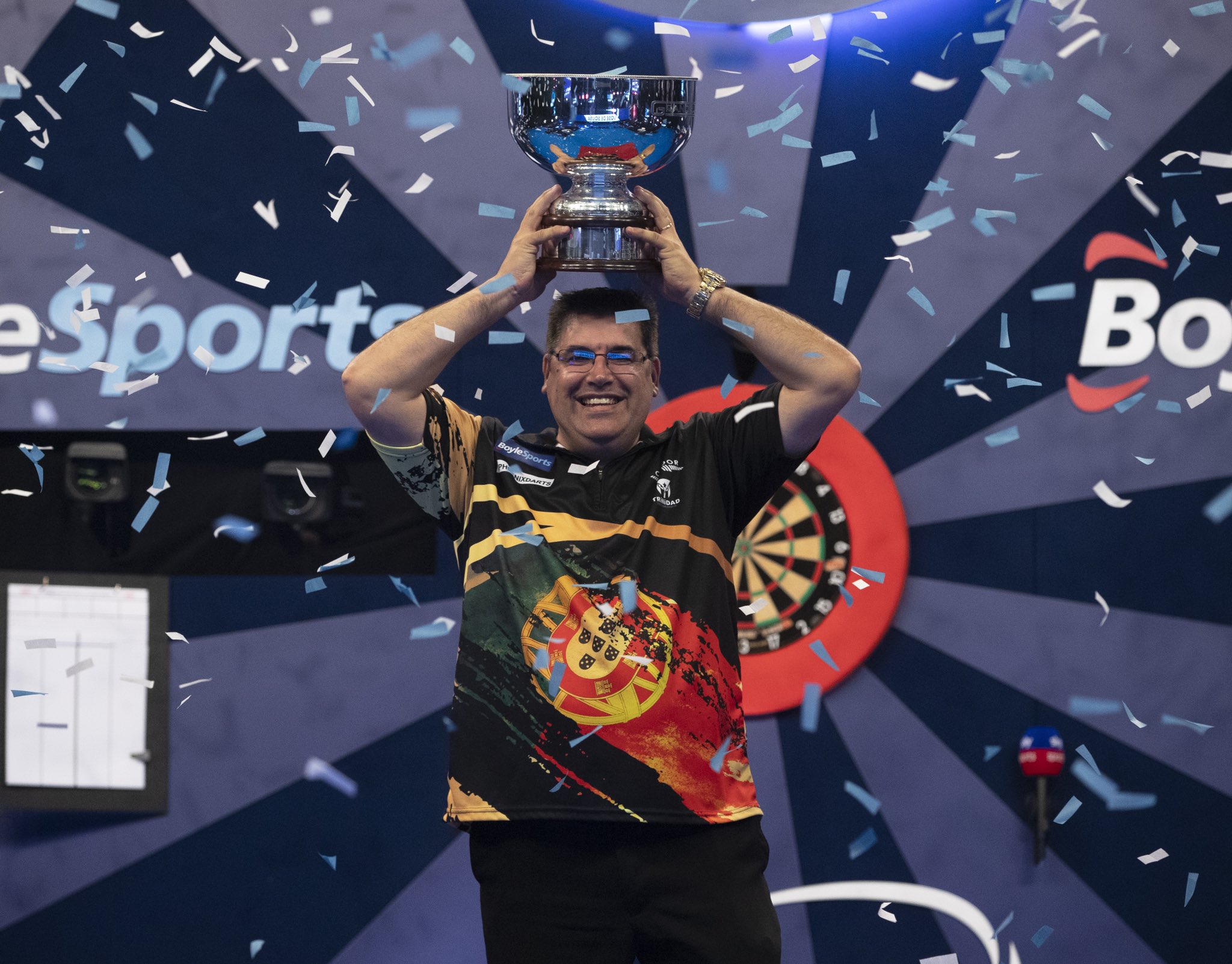 Jose de Sousa lifted the 2020 Grand Slam of Darts as the Portuguese debutant overcame James Wade on Tuesday evening at the Ricoh Arena in Coventry.

A devastating De Sousa became the first thrower from his country to secure a major accolade, just two years after coming through European Qualifying School to seal his maiden PDC Tour Card.

The 46-year-old claimed two ranking titles during his debut season on the professional scene, before triumphing at the European Darts Grand Prix last month, and translating that form to the majors was the next step on his journey to stardom.

In one of the greatest success stories of recent times, the man nicknamed ‘The Special One’ defeated Dave Chisnall, Michael Smith and Simon Whitlock in the knockout stages, before denying Wade to lift the Eric Bristow Trophy aloft.

“This is a dream come true, I can’t explain my feelings in this moment,” an emotional De Sousa said. “This is the greatest day of my life. When I hit the 158 finish I knew I was going to cry straight away.

“Five years ago, I was on my sofa at home watching the guys play on TV and I wished that maybe some day I can play against these wonderful players.

“There is so much work behind me to get to this position. I am so thankful to everyone. It was a big change I made to my life in turning professional but look at me now. It’s amazing and I’m very proud of myself.”

In the early exchanges of the final, nine squandered attempts on the doubles from De Sousa allowed Wade to construct a 3-0 advantage, but the Portuguese player would form a fight back before the first interval.

De Sousa was firing home maximums at alarming regularity, and pulled off a 14-dart break of throw, before landing a magnificent 10-darter on double eight to move within one of the nine-time major winner.

Wade responded with an 11-darter of his own to re-establish his two-leg cushion, only for his resilient opponent to claim back-to-back legs to level up proceedings at four-all.

‘The Machine’ immediately broke back with a timely first 180 followed by his favourite double tops to move 5-4 in front, and just when he seemed on course to doubling his lead, De Sousa converted a mesmerising 130 checkout to restore parity at five apiece.

Four subsequent holds of throw saw the match surpass its midway point level in scores, though, De Sousa then began to mount his charge, winning three legs on the bounce to move 10-7 in front.

Wade reposted with a mesmerising 161 checkout on the bullseye, but four further legs from the Portuguese thrower saw him extend his lead to 12-8 and edge closer to the biggest win of his career.

Three of the next four went Wade’s way to halve the deficit, only for De Sousa to eventually move 15-11 ahead and on the cusp of getting his hands on a stunning piece of silverware.

The multiple-time major champion would snatch his twelve point of the contest, however, his luck ended there as the Portuguese sensation converted a spellbinding 158 finish to seal the deal.

Jose De Sousa joins the elite in world darts as he is crowned the 2020 BoyleSports Grand Slam of Darts CHAMPION!

Sheer emotion on the face of Jose as he wins the biggest match of his life in sensational fashion!

Despite enduring defeat in a thrilling finale, it was a remarkable week in Coventry for Wade as he defeated Ian White, Damon Heta and Dimitri Van den Bergh to reach the final of the Grand Slam for a third time.

De Sousa’s heavy scoring proved too much for Wade to handle, and the world number seven ran out of steam as the latter stages of an incredible tournament neared.