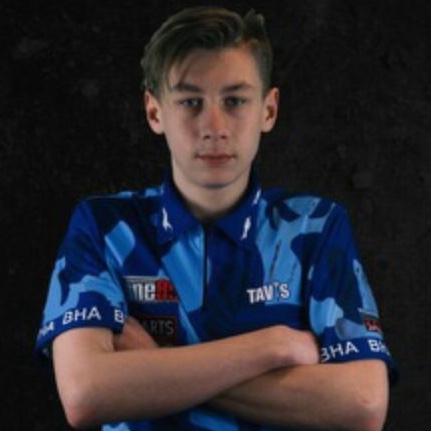 Tavis Dudeney claimed £150 and embedded his name into the JDC Hall of Fame as he beat Freddie Francis in the final of the third JDC event of the year.

Dudeney, based in Brighton, was awarded with a place at the Junior Darts Corporation finals day in Bristol last this year and a place in the JDC Hall of Fame.

The 14-year-old opened his day at the Cueball Club in Derby with a 3-0 whitewashing of Jack Ratcliffe before edging through to the last 16 with a 3-2 win over Will North.

A convincing 3-1 victory over Ryan Jordan and a 3-2 win over Lewis Gurney put Dudeney into the semi-finals where he would face England international Keelan Kay.

The first four legs went with throw in the semi-final before Kay once again held his throw with an out of sorts 41 dart leg. Dudeney sent the match into a last leg decider with a 30-dart leg. The Brighton-based ace booked his place in his maiden JDC final with a stunning 16-dart leg in the final leg.

Dudeney took on Freddie Francis in the final, who enjoyed victories throughout the day in Derby against some exciting young prospects.

Francis saw off George O’Neil in the opening round before a victory over Antony Richardson. Wins over Davy Jay Knowles and George Lynch before booking his place in the final with a win over a JDC Allstar in Alfie Jacques.

Francis took an early 2-0 lead in the final but Dudeney fought back, winning three straight legs in 52 darts. Francis took the next leg, though, it turned out to be a consolation leg as Dudeney won the title, pinning tops.

A massive victory for Tavis Dudeney from Brighton as he will compete at the finals day in Bristol last this year and courtesy of his victory has embedded his name into the Junior Darts Corporation Hall of Fame.

A special mention goes out to George Lynch who completed six perfect darts in his second round victory over Liam Mason!

The JDC UK Tour will now take on short break before returning to action at the beginning of June when the tour moves onto Riley’s Benfleet in Essex.