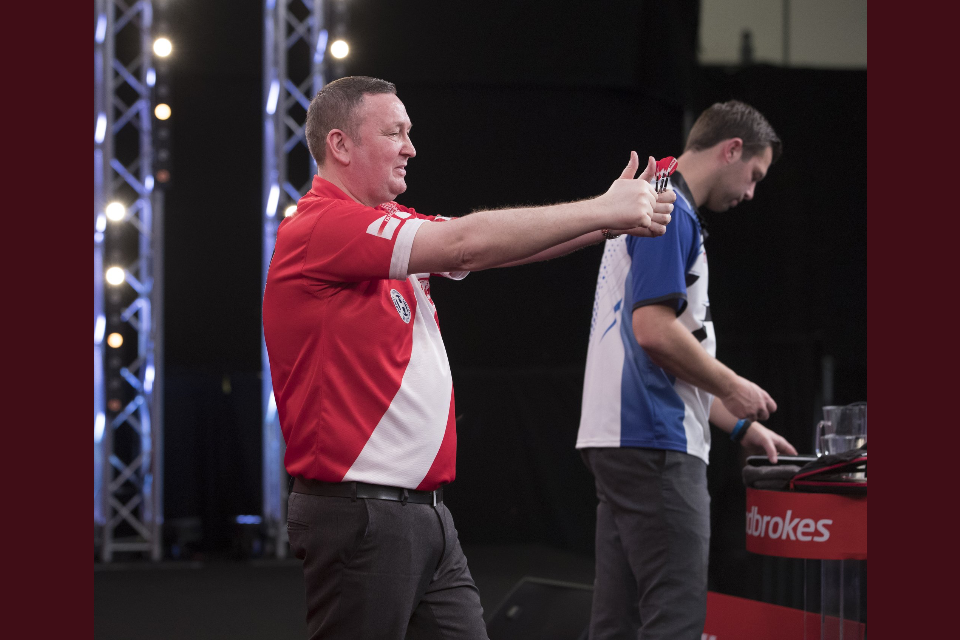 Durrant impresses as European Tour gets underway in Munich

Glen Durrant was the star of the show as the European Tour continued with its third event of the year in Munich. Krzysztof Ratajski and Stephen Bunting also impressed on the opening day of the German Darts Grand Prix.

When the draw came out, most people pointed straight away at a tie, between Glen Durrant and Jamie Hughes, a repeat of the 2017 BDO World Championship semi final. Durrant burst into a 3-0 lead early on, although Hughes missed darts to win 2 of the legs. ‘Yozza’ pulled one back, before Durrant pinned a stunning 170 checkout to regain his 3 leg advantage. This seemed to knock the stuffing out of the Tipton man, as the 3 time Lakeside champion finished the match with legs of 16 and 14 darts.
He faces Joe Cullen on Sunday evening, a game singled out as one of the ties of the second round.

Ricky Evans came through a deciding leg to knock out home favourite Gabriel Clemens in a thriller. The first four legs went against throw, before the next six went with throw, in what was in truth an unusual match. ‘Rapid’ Ricky fired in a maximum at the start of the 11th leg and never relinquished his advantage, pinning double 16 to set up what is sure to be a quick fire tie with Michael Smith.

Nathan Derry produced arguably the shock of round 1, defeating 1996 BDO World champion Steve Beaton by six legs to one. Derry, who has only 6 Players Championship wins in 2019, had an unbelievable first 9 average of 129, blowing Beaton out of the way. Derry faces Darren Webster on Sunday, where he will be hoping to reproduce this incredible form. Michael Rasztovits also caused a shock result, pinning 75% of his doubles to see off Premier League contender Chris Dobey 6-3.

Stephen Bunting and Krzysztof Ratajski were both in flying form as they saw off Alan Norris and Martin Schindler respectively. In a repeat of the 2014 BDO World Final, Bunting opened up with a 142 checkout and never looked back, defeating Norris 6-1 with a 99 average. Ratajski also impressed, brushing off the hostile crowd to average 97 in seeing off the German favourite Martin Schindler 6-2 and in the process, setting up a Sunday night showdown with Michael van Gerwen.

It was a bad day overall for the Germans in front of the home crowds, as all 5 Home Nation Qualifiers were sent packing along with Clemens and Schindler. Dragutin Horvat came the closest, losing out 6-5 to Kim Huybrechts, but Marko Puls, Jyhan Artut, Kevin Munch and Michael Hurtz were all defeated soundly, by Arron Monk, Josh Payne, Kyle Anderson and Cristo Reyes respectively.

Keegan Brown came through a tough tussle with old timer Magnus Caris, winning the last 2 legs to come through 6-5. Ritchie Edhouse took out a 140 checkout en route to seeing off Brendan Dolan 6-4, while Karel Sedlacek saw off a strong fight back from Diogo Portela to win by the same scoreline. Ted Evetts and Ross Smith also came through their first round ties, both impressing as they comfortably saw off Mark Wilson and Mark Barilli.

The German Darts Grand Prix continues Sunday afternoon, with the seeds joining in at the second round stage. Michael van Gerwen faces Krzysztof Ratajski, but arguably the tie of the round is between Joe Cullen and the ultra impressive Glen Durrant on Sunday evening.