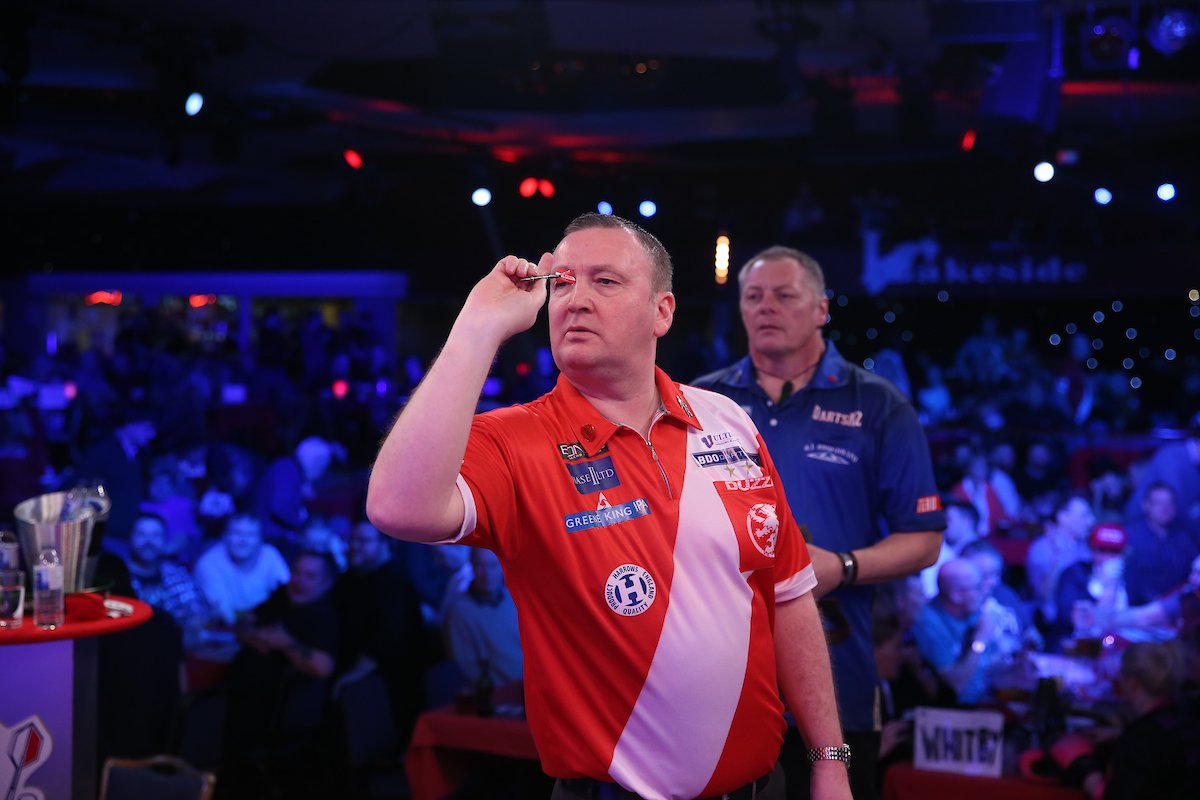 Durrant and Mitchell impress on Day Four at Lakeside

Seeded second for this competition, Durrant won the opening set in just 51 darts and quickly motored through the second in a performance that saw him record seven maximums. McGrath got on the board in the second set with a brilliant 122 bull checkout and the Kiwi held his throw in the third set to keep Durrant honest, but he never really got close enough to threaten the upset. Durrant won the match with a 116 finish, ending with 39% on the doubles and an average of 93.9.

Durrant’s opponent in the last 16 will be Scott Baker, after ‘The Mod’ dispatched Scotland’s Ross Montgomery with relative ease in the final game of the afternoon session. Baker had some issues with his finishing during the contest but tucked away a 103 in the final leg of the match to secure a debut in last 16. Montgomery won just three legs all game and will be disappointed to suffer yet another first round Lakeside exit – his 8th in 12 appearances at Frimley Green.

The other standout performance of the day belonged to former champion Scott Mitchell, who breezed past Serbia’s Oliver Ferenc 3-0 in the afternoon. Mitchell started the match with a 180 with his first three darts and whilst he would only add one more across the rest of the match, the Dorset captain produced as assured a performance as anyone so far this year. To his credit, Ferenc got more into the contest as it went on, holding his throw both times in the final set to avoid a complete whitewash and bump his average up to respectable 85.60. For Mitchell, he finished with 43% on the doubles and an average of 94.64 to book a date with Poland’s Krzysztof Kciuk in the second round.

Kciuk, who had seen off the Dane Brian Lokken in a low-scoring preliminary round contest, caused a fairly sizeable upset in the day’s opening contest, demonstrating more clinical finishing to see off 11th seed Dave Parletti 3-1. England’s Parletti showed flashes of real quality on his debut, most notably finishes of 140 and 121, but he struggled to match the Pole’s consistency and never seemed to find a rhythm. To his credit, Kciuk scored much more heavily than against Lokken and also hit a couple of ton-plus finishes of his own, including a crucial 143 to break in the fourth set after Parletti had led 2-0.

Two further seeds crashed out of the competition in the evening session, with Chris Landman falling to Kyle McKinstry and Gary Robson falling to the impressive Canadian David Cameron. Of the two games, it was that between McKinstry and Landman that was the more entertaining.

10th seed Landman came out like a house on fire in his game with McKinstry, winning the first set 3-1 in legs, highlighted by a rapid 104 checkout. McKinstry fired back to take sets two and three, but a series of missed doubles from the Northern Irishman in the fourth allowed his Dutch opponent to level it up again and force a decider. Landman drew first blood in the closing set with a 16-darter and had a dart to win the second leg, but McKinstry punished that miss with a brilliant 133 checkout and he followed that up with successive 18-darters to win his first game at Lakeside. McKinstry hit five maximums in an average of 91.16, although he’ll be disappointed to only finish with 26% on the doubles.

Gary Robson had been tipped by many to do well this year after what was arguably a career-best year for the Cramlington ace, but ‘Big Robbo’ ended up having a horror show against David Cameron, who caused a second upset in as many days by winning 3-1. Cameron appeared full of confidence after his win against Andy Hamilton yesterday and fired in successive 13-darters as he won the opening set with an average of over 102. Robson managed to get a foothold in a lower quality second set, but after the break Cameron once again kicked on and proceeded to win six of the final seven legs as he made the last 16 for the first time. For what it’s worth, Robson went four from six on his doubles but such was his low scoring and Cameron’s clinical finishing (the Canadian finishing with a checkout rate of almost 50%) that he got very few chances. Cameron’s final average of 89.65 was his highest to date at Lakeside in eight matches.

The ladies quarter-finals also continued to take shape on day four at Lakeside, with Aileen de Graaf and Lorraine Winstanley both progressing.

De Graaf wasn’t quite at her best but the fifth seed had enough in the tank to see off the ever-popular Paula Jacklin 2-0 in a rematch of their match at last year’s championships. Jacklin won legs in both sets but De Graaf’s more consistent scoring limited her opportunities and ensured she remains winless through four Lakeside appearances. De Graaf finished with an average of 72.11 but she’ll need to be better in the next round, where she takes on Anastasia Dobromyslova.

In the other ladies game, Lorraine Winstanley edged a scrappy affair against Kent youngster Casey Gallagher 2-1. Winstanley, this year’s top seed in the ladies competition, had been seen as one of the favourites but she struggled for large periods of this game, which was the first so far in this year’s ladies competition to go to a deciding set. In fact, Winstanley could have been out had Gallagher converted any of the five missed set darts she had in the opening set. Instead, it was the Derbyshire ace Winstanley who showed better finishing and killer instinct in the final set, winning it 3-0. Winstanley will know her average of 69.25 will have to improve if she wants to win the competition for the first time, and she now awaits either Trina Gulliver or the debuting Karolina Podgorska in the quarter-finals.

Gulliver fights back to defeat Podgorska at Lakeside