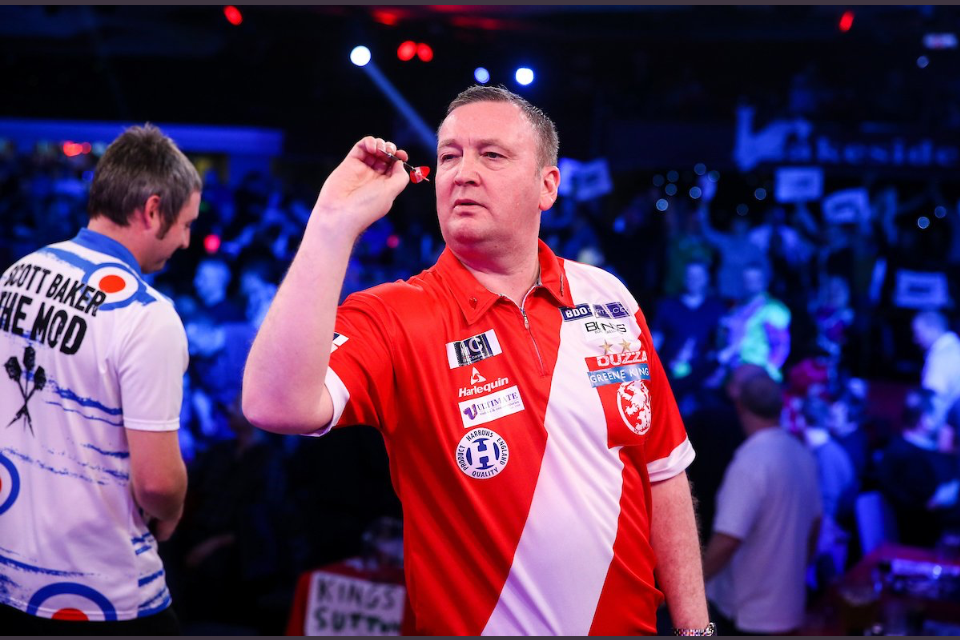 Durrant comes through Lakeside classic to see off Baker fight back

The defending champion Glen Durrant fought past Scott Baker in an all time Lakeside classic to book his spot in the quarter finals of the 2019 BDO World Darts Championships. His opponent will be Kyle McKinstry, who survived match darts to see off David Cameron in a deciding set. Anastasia Dobromyslova and Lorraine Winstanley came through quarter finals to set up a semi final clash in the ladies’ draw.

Glen Durrant came through a Lakeside classic to see off an extraordinary comeback from Scott Baker and win 4-3. Durrant had comfortably defeated Mark McGrath in the previous round, while Baker had beaten Ross Montgomery. Durrant got off to an ideal start, firing in an 11 dart leg to break Baker’s throw in the opening leg of the match. With legs of 14 and 15 darts, Durrant finished off the set impressively to lead Scott 1-0. The first two legs of the second set were both holds of throw, before Baker broke Durrant after he missed four darts at double. However, the defending champion fought back to win the next two legs in 31 darts to open up a 2-0 lead. Durrant won the third set 3-1, with legs of 12, 13 and 13 darts to open up a commanding 3-0 lead and go within a set of the match. Scott Baker was not ready to go home just yet, taking the opening two legs of the next set. However, Durrant fought back to level the set at 2-2 and throw for the match. Glen left himself on 40 after fifteen darts, but Baker got a set on the board, pinning tops to make it 3-1. He started to believe when he began the next set with an 11 darter, but Durrant managed to bring it to another decider. Glen left 111 for the match, but his dart at tops crept into the double 5, allowing Baker nail the same double and pull another set back. Scott had a big following behind him, and they got right into the game, becoming Baker’s ‘twelfth man.’ Scott flew into the sixth set, taking two quick legs to go within a leg of levelling the match. However, Durrant fought back once again, levelling the set and creating another decider. Glen missed another dart for the match when he wired double 18 for a 116 checkout, but expected to come back with Baker waiting on 140. Scott had one huge hurrah in him, pinning double 10 with his last dart for an incredible checkout and to level the match. Durrant was not to be deterred, breaking Baker’s throw in the opening leg of the final set with a crucial 84 out on the bull. Both players managed to hold their throws, giving Durrant another chance to finish the job. Firing in a maximum en route, Glen Durrant finally managed to see off the challenge of Scott Baker in an extraordinary match, pinning double 12 to finish the job 4-3. It was an incredible match, with both players deserving immense credit, but at the end of the day, it was the champion Glen Durrant who held his nerve to progress.

His opponent in the quarter finals will be Kyle McKinstry, who fought past David Cameron in a gruelling last leg decider, surviving match darts on the way. Cameron had made his way through from the preliminary round, where he beat Andy Hamilton before defeating Gary Robson in the first round proper. McKinstry knocked out Chris Landman in round 1 to set up the last 16 clash with the Canadian. Kyle got off to an ideal start with a 14 darter to break Cameron’s throw in the very first leg. McKinstry served the set out with two decent holds of throw to open up a 1-0 lead. ‘The Village Man’ flew through the second set, only allowing the Canadian one dart at double while getting a commanding two set lead. The first two legs of the third set were both holds on throw, before Cameron got an important break of throw with an impressive 96 finish. He fired in an excellent 14 darter to finish the set and get himself into the match at 1-2. David started to get a real grip on the match, pinning double 10 to break Kyle’s throw after The Village Man had missed 5 darts at double. Cameron won the next two legs confidently to level the match at 2-2 and make it a best of three. The players shared the opening two legs of the fifth set, before Cameron gained the advantage with a crucial 86 finish on the bull with Kyle sitting on 40. David finished the set with a nerveless 68 checkout to lead 3-2 and go within a set of the match. At 1-1 in the next set, David broke Kyle’s throw to go within a leg of the match at 2-1. However, McKinstry responded with a crucial 78 checkout to save the match, pinning tops with his last dart. It sent the set to a decider, which would either see Kyle level the match or David finish the job. Cameron left himself on 122 to win, but wired the bull to leave 25. This gave McKinstry a shot at 102 to level it all up, but failed to hit a vital treble. Cameron incredibly missed two more match darts at double 10, allowing McKinstry to pin tops and send the match to a deciding set. The missed darts for the win seemed to knock the stuffing out of the Canadian, as he failed to get anything going in the final set. McKinstry breezed through the set 3-0, finishing the job on double 16 for the biggest win of his career. It was a devestating defeat for David, but brilliant for Kyle McKinstry, who will know he has to up his game even more in the quarter finals.

Anastasia Dobromyslova laid down a marker in the ladies’ draw, defeating Aileen de Graaf 2-0 with an excellent display. The first four legs of the match were all impressive holds, with neither player allowing the other a chance to break throw. Anastasia had the darts in the crucial deciding leg, and with an excellent 17 darter, took a 1-0 lead. Dobromyslova upped her game even more in the second set, breaking Aileen’s throw with a 56 finish. She held her throw in the next leg before firing in an outstanding 11 dart leg to finish the job. It was an excellent performance from the Russian, and it could make her many people’s fancies to go all the way.

Lorraine Winstanley will be her opponent in the last 4, after she defeated Trina Gulliver MBE by two sets to nil in the other quarter final. Neither player settled in particularly well, as both had their throw broken in the opening two legs. Lorraine gained the initiative by breaking Trina’s throw with a 60 checkout, before finishing the set on double 4 to open up a 1-0 lead. Winstanley took a 2-0 lead in the second set, including a terrific 124 checkout on the bull. However, Gulliver fought back, surviving four match darts to send the set to a decider. The 10 time world champion left herself on 8 to level the match, but missed three darts at double, allowing Lorraine to step in and finish 56 to book a spot in the semi finals. She didn’t play her absolute best, but Winstanley won’t mind as long as she brings her A game to the semi finals.