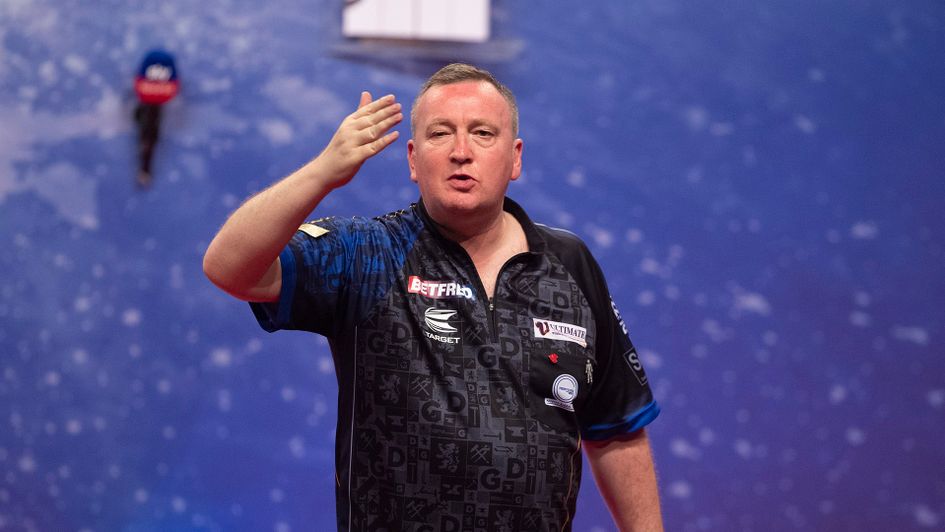 Glen Durrant produced a late purple patch to beat World Matchplay champion Rob Cross in a final set to progress to the quarter finals of the World Grand Prix.

Durrant saved his best darts for the end stages of his clash against the 2018 PDC World Champion Cross to book his place into the Quarter finals on debut in Dublin.

In a sluggish opening set where neither found their rhythm, it was the three time BDO World Champion that took the lead in the deciding leg with a 177 giving him breathing space before hitting tops.

But Voltage sparked into life after the break with finishes of 144 and 134 in successive legs as he levelled the game at 1-1.

Durrant regained the initiative in set three after hitting a 109 checkout to lead the match 2-1.

But Cross bounced back to level the game at 2-2. After Durrant missed seven darts to open the fourth leg of the fourth set, Voltage capitalized on the opportunity to level the set up before hitting a 138 checkout to send the game to a final set.

The deciding set saw the game set alight with successive maximums in the first leg before Durrant seized the initiative with a 45 checkout on double 16 to lead 1-0. Durrant doubled his advantage when Rob Cross missed darts at double 5 and double 2 to level the game before Duzza hit a double 5 of his own.

And with the finishing line in sight Durrant kicked off what proved to be the final leg of the match with a 152, before pinning tops on the back of a 52 checkout to win the match and book his place in the last eight.

Jermaine Wattimena knocked Peter Wright out the tournament after a 3-1 win over the former UK Open champion.

Wright came out the traps flying, hitting two ton plus checkouts to take a 1-0 lead. After Wattimena won the opening leg, Wright replied with a 111 finish. And after both players missed darts at double at the start of the final leg of the opening set, Wright sent the crowd into a frenzy with a 148 checkout to take a 1-0 lead.

Snakebite missed two darts to save the second set as Wattimena levelled the game up with a white wash.

The Machine Gun came out after the break and hit a 96 out before a series of breaks saw the set go to a last leg where Wright missed three set darts with the Dutchman taking out tops, tops to go 2-1 up.

Wattimena missed darts at double to win the first leg of fourth set before Wright took out 86 on double 16. The 31-year-old broke to go within a leg of victory. The Scot had darts at tops to save the match but couldn’t convert before a 165 saw the Dutchman set up double 20 which he hit to seal a win which sees him in a TV major singles quarter-final for the very first time.

Chisnall came back from 2-0 down in the opening set to take the lead. A 13 darter on tops was quickly followed by a 171 to leave tops, before winning the opening set on Double 20.

Bunting broke the Chisnall throw at the start of the second set before Chizzy broke back with a 94 outshot.

But it was the doubles to start with which became Bunting’s downfall in the second set, with the Bullet taking eight goes to get off the mark in leg 4. Chisnall went on to win that leg on double 4 to make it 2-0.

Chisnall raced to the finishing line with a whitewash in the final set despite Bunting having opportunities to win the last leg of the match, but Chisnall penned double top to complete the win.

Nathan Aspinall came back from 2-1 down to beat Danny Noppert in a deciding set in a see-saw affair to open the night.

Noppert got off to the worst possible start in the first leg of the game, missing 16 darts at double to kick the game off. However, despite the slow start the Dutchman kicked on to win the opening set in a decider.

Missed darts at double 10 for Noppert in the second leg of the second proved vital. 1-0 down in the set he missed two darts at the double before Aspinall pinched the leg on double 12 and then leveling the game at 1-1 shortly after.

The former Lakeside finalist regained a 2-1 advantage before the UK Open champion came charging back. An 88 finish on the bull saw the Asp level the game at 2-2 in sets.

And from then Apsinall put on a final set showing which was hard to keep up with. Completing the final set in just 43 darts, breaking Noppie with a 12 darter in leg two with a maximum followed by a 92 outshot.

The Stockport thrower completed the win the leg after nailing 89 on double 16 for a 15 dart leg.