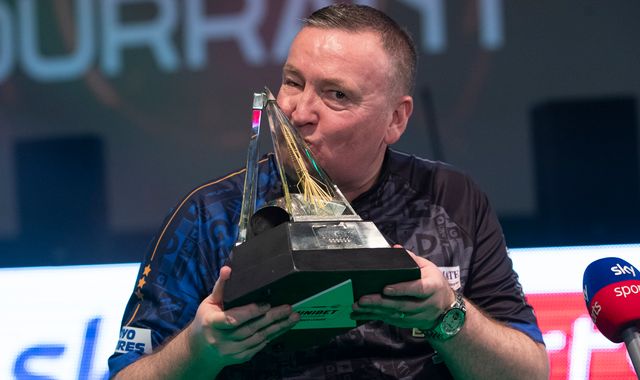 In what was a far cry from the often boisterous atmosphere that people would normally enjoy, an emotional Durrant scooped his largest darting payday behind closed doors at the Ricoh Arena.

A frantic final commenced with Durrant racing into a 2-1 lead with both players averaging over 100, and a £250,000 winner’s cheque up for grabs, the nerves didn’t seem to be on show.

With history at stake, each player was holding their own and not giving the other any room to manoeuvre. Durrant took full advantage in the seventh leg as he took a 4-3 lead and was looking to assert his dominance.

A flurry of maximums from ‘The Asp’ opened up the door for him to take advantage, but two missed darts at double 20 allowed Durrant to hold his throw at 5-4.

After squaring scores at five apiece at the break to set up a fitting finale for this seasons Premier League, Aspinall was put under pressure for the first time as Durrant had darts to move into a 7-5 lead, but he recovered well and the final remained level.

Durrant was the one to make his move and produce a moment of magic, fighting off two leg darts from Aspinall, he made sure he didn’t miss his opportunity and hit double eight at the second attempt to move two legs in front at 8-6.

A mesmerising 127 checkout opened up a three-leg lead, a vital time to produce a stunning checkout. Only needing two legs, the title was Durrant’s to lose.

The difference between the two was remarkable; Durrant was in a state of tranquillity, knowing that if he held his throw he would be the champion. He won the 17th leg to lead 10-7 and only required one more leg to win.

The enormity of the task was looking to prove too much for Durrant as he missed four darts at double 16 to win the title, but he never wavered and secured the title on his next attempt. A thrilling final in what was a Premier League that will go down in history.

Beforehand, Durrant overcome two-time champion Gary Anderson in the semi-finals, with both coming into the contest looking to make up for below-par performances in the Grand Prix last week.

Anderson was the last person to win the Premier league in 2015, before Michael van Gerwen’s period of dominance.

The opening legs were scrappy to say the least, with nerves and a lack of fluency affecting both players. Durrant moved into a 3-1 lead, not because of his own outstanding performance, but due to Anderson missing several darts at double over the opening four legs.

Durrant sailed into a 5-2 lead but the standard was relatively poor, both men letting each other off the hook numerous times and none of them taking a hold of the match.

Leading 6-3, Durrant’s average was only 84. A -much-needed 84 checkout from Anderson cut the deficit to just two legs as the players exited the stage at the commercial break.

The Scotsman must have gave himself a serious talking to at the interval as he opened up with a majestic 120 outshot to reignite his hopes in the match. Following this up with the next leg, but Durrant nicked another one to hold a slender 7-6 lead.

The tides turned as Anderson turned it up a notch and hit a couple of 180s to take a scarcely believable 9-7 advantage.

For a match of such poor quality in the opening exchanges, it was only ever going to head into a deciding leg. And what a nerve-wracking finish it was, with both players missing darts to win the match, before Durrant hit double 10 on his first attempt to reach his maiden Premier League final.

Meanwhile, Aspinall ousted the reigning world champion Peter Wright. In almost a carbon copy of the first semi-final, the opening exchanges were nervy as Wright moved into a 3-1 lead.

Aspinall sprung into life and levelled the scores up at four apiece, although nobody was taking the bull by the horns, the quality was increasing as both players were both averaging well over the 90 mark.

A nine-dart attempt was foiled after Aspinall missed the eighth dart, but he took the lead for the first time in the match at 5-4.

A fantastic 138 checkout from former UK Open champion Aspinall showed how much he was easing into the match, as Wright’s standards began to drop, ‘The Asp’ led 6-4 going into the break.

Wright came back quickly out the blocks, checking out 126 to stay just one behind. Aspinall missed the chance to lead by three as he dragged a shot at double 19 wide and Wright capitalised to stay in the hunt.

The pressure seemed to be telling on the debutant as he missed five darts at a double, but eventually converted to leave him just one leg from the final.

He duly delivered by holding his nerve and converting his first match dart, an excellent performance from Aspinall to set up a final very few would have predicted way back in February.