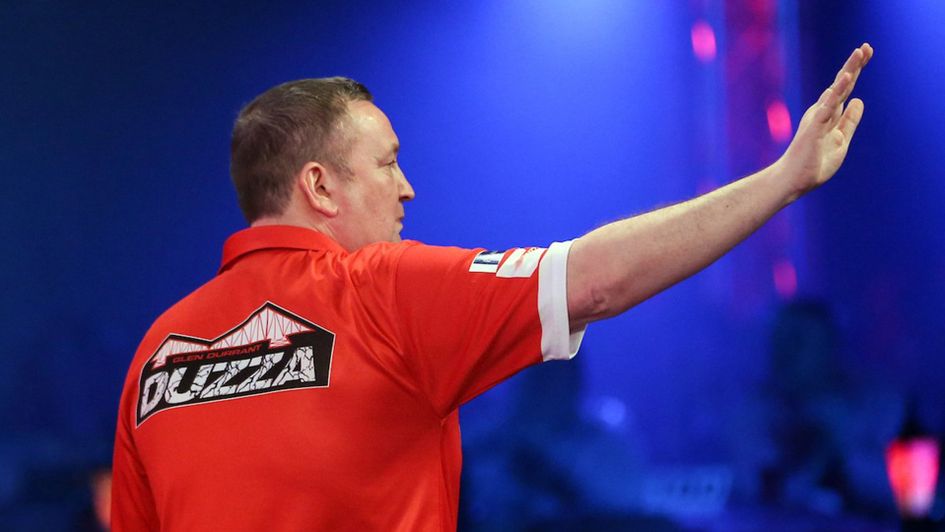 Glen Durrant clinched his second PDC title at the Barnsley Metrodome following an 8-1 romp of Darius Labanauskas in the final of Players Championship 15 on a day that also saw Dave Chisnall nail the nine-dart leg.

Durrant, who lifted his third success BDO World Championship crown in January, claimed his first PDC title in February and added to his tally in Barnsley, trousering £10,000 in the process.

‘Duzza’ got proceedings underway with back-to-back whitewashes over Matthew Edgar and Simon Stevenson, before a 6-4 victory over Kyle Anderson put the Middlesbrough man into the last 16 in South Yorkshire.

The 48-year-old produced a terrific 138 outshot in his fourth round 6-4 win over Danny Noppert, in a repeat of the 2017 BDO World Championship final, before a victory of the same scoreline over Michael Smith, with finishes of 102 and 123 being planted by the eventual champion.

World champions then collided in the semi-final as BDO champ, Durrant, took on reigning PDC world champion, Michael van Gerwen, in the pair’s first meeting. Durrant raced to a 7-2 victory over ‘Mighty Mike’, hitting a 101.1 average and seven of his 14 attempts at the outer ring en route to booking his place in the final.

It was then plain-sailing for Durrant in the final as he completed an 8-1 romp of Darius Labanauskas. The 48-year-old once again found half of his attempts at double as well as four maximums on his way to not only doubling his PDC title tally, but also securing a provisional debut at Blackpool’s World Matchplay.

It wasn’t to be in the final for Labanauskas as he ran into a rampant Durrant, but after reaching his maiden PDC semi-final just weeks ago, he became the first Lithuanian to reach a PDC final. ‘Lucky D’ enjoyed wins over the likes of Gabriel Clemens, Cristo Reyes, Steve Beaton and 19-year-old Bradley Brooks on his way to the final.

Elsewhere, European Darts Grand Prix winner, Ian White, exited in the quarter-final after suffering a narrow defeat at the hands of Ron Meulenkamp, while Chris Dobey and Michael Smith were dumped out at the same stage.

Peter Hudson stole the show in the early rounds as he saw off former UK Open semi-finalist Robert Owen, UK Open winner Nathan Aspinall and World Matchplay semi-finalist Jeffrey de Zwaan en route to a much-needed run to the fourth round in Barnsley.

Peter Wright, Dave Chisnall and James Wade were among those to exit in the second round, while Joe Cullen, Adrian Lewis and Corey Cadby all departed at the first hurdle.

Jamie Hughes, who reached the semi-finals at the European Darts Grand Prix, also bowed out in the first round after running into an inspired Raymond van Barneveld.