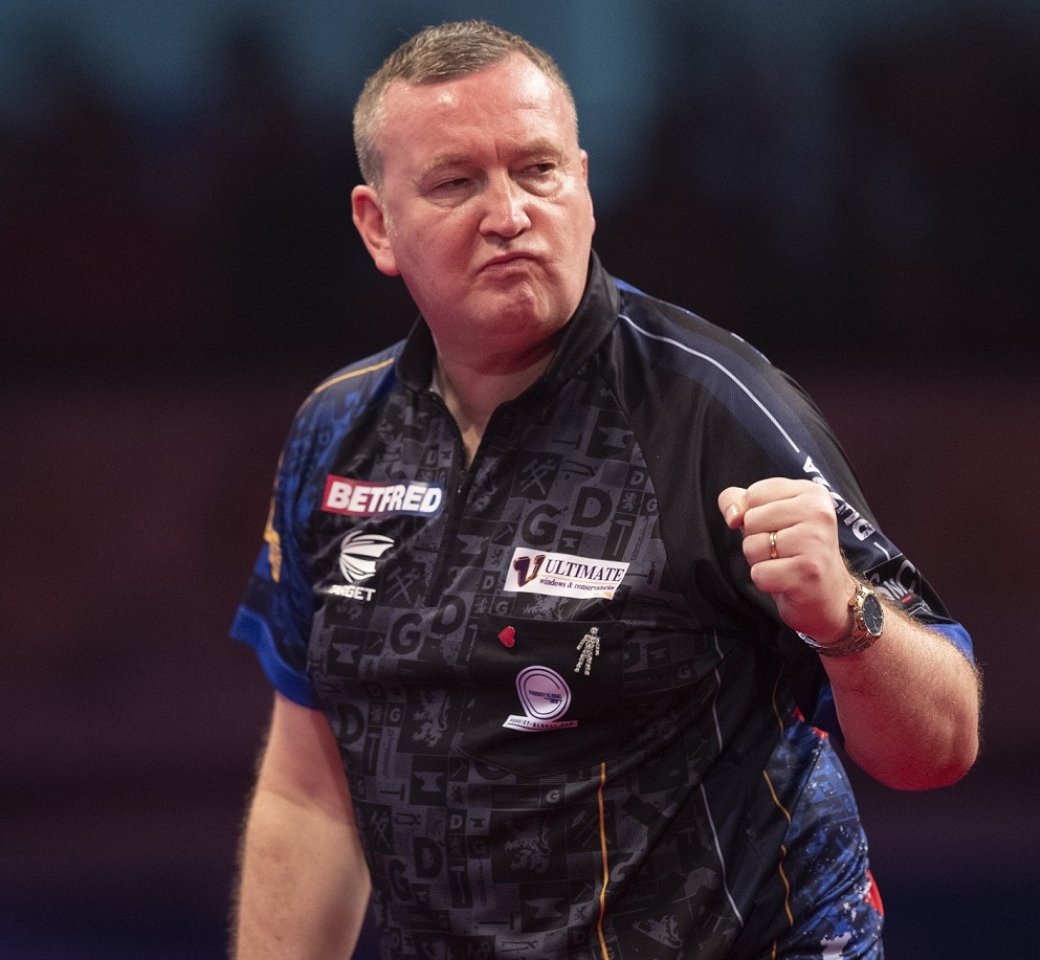 Glen Durrant sent Peter Wright packing from the BetFred World Matchplay, as he clinched an 11-8 second round win in a topsy turvy contest at the Marshall Arena in Milton Keynes.

Wright kicked off proceedings with a 180 with his first three darts, but missed six clear darts at double to allow Durrant in, but the Teessider missed a dart at tops of his own to allow Wright to clean up double five first dart to open his account. Two missed darts at double cost Wright the second leg in what was a slow start for both. It was a beginning littered with missed doubles, and a 76 finish allowed “Snakebite” to break to take a 3-1 lead, which he extended to 4-1 at the break with a 12 darter. After gaining the first leg after the break, Durrant came to life with a 108 finish to bring the match back onto throw, and levelled at 4-4 on double ten. A 104 finish saw “Duzza” hit the front, and a 92 finish after more wayward double attempts from Wright saw the man from Middlesbrough go 6-4 in front at the second break.

An 11 darter saw Durrant move further ahead on the resumption, but four missed darts at double saw Wright close within two, and an 86 finish, followed by a 121 finish, both on the bull for the Scot made it 7-7. Wright’s scoring was increasing, while Durrant’s was going the other way as the world champion moved in front, but the three time BDO world champion wasn’t finished, with a 76 finish bringing him level. Durrant then went six darts into a nine darter, but settled for the crucial break of throw with a 14 darter for a 9-8 lead. Wright then missed a dart at the bull for another 121 checkout, and then watched Durrant take out 74 in two darts to go to the brink of a place in the last eight. The job was completed in the very next leg, as Durrant finished 90 on double eight to advance and put the tournament favourite out.

“I’m so happy to get through that, I showed my fighting qualities again” said Durrant after his win. “Peter was nowhere near his A game, and I was hoping my doubling would help me out in the end, and I’m delighted to get through”.

Kicking off proceedings on Wednesday night was the seventh seed, Daryl Gurney, who would have hoped to have a decent run in Milton Keynes, but his tournament was abruptly ended by the rampant Vincent van der Voort, who took an impressive 11-5 win to move into the quarter finals, where he will face Glen Durrant.
van der Voort hadn’t won a match at the Matchplay for nine years, but followed up Sunday’s convincing win over Dave Chisnall with an even better showing to beat Gurney.
The Dutchman broke in the very first leg with an impressive 12 darter, three 140’s followed by an 81 finish doing the job. van der Voort doubled his lead with double ten. The Pumerand native notched his first 180 in leg three, and quickly hit another soon after to leave himself on 45, which he polished off in two darts for a second break to lead 3-0. van der voort missed a dart at tops for 4-0, but Gurney missed three at the same double, allowing Vincent to nail double 10 for a big lead. The Irishman just couldn’t get going, and a first session whitewash was confirmed when van der Voort cleaned up a 79 finish on tops for a 5-0 advantage to make it a triple break, with a 103 average to boot.
Gurney came back from the break with a first 180, and pinned double 12 for a break back, and then reduced his arrears to 5-2 on tops to mount a fightback, but van der Voort got back on track with a back to back superb 80 finishes on double ten to regain his sizable lead at 7-2. A 180 from the big Dutchman opened leg ten as Gurney struggled on the trebles, and it became 8-2 at the second break as “VVDV” nailed double nine for a 96 finish.
van der Voort banged in a fourth maximum to kick off the third mini session, and could afford to bust 16 before returning to pin double four to extend his advantage. “Superchin” was powerless to stem the tide as another 180 began the 12th leg, and a 38 finish put him one away from victory at 10-2. van der Voort missed a dart at the bull for the match, and Gurney stepped in to finish 99 to delay the inevitable, and, after Gurney missed a dart at the bull for a 161 finish, van de Voort then wired tops for a 132 finish, and Gurney saved himself again on double eight. It was 10-5 as Gurney, aided by a second 180, cleaned up 82 on tops to continue his fightback. Ultimately, he left himself too much to do as van der Voort ruthlessly saw the match out with a 94 checkout to seal one of the finest wins of his career with a 97.67 average and 11/21 on the doubles.
“I’m really happy for the win, and I worked hard for it. It’s a major achievement for me” said van der Voort post match.
Adrian Lewis is on course for a maiden Matchplay title, as he moved into the quarter finals with an 11-7 win over Danny Noppert.
“Noppie” held throw with an 89 finish in the opener, and Lewis immediately responded with a 107 checkout to level, and the match went with throw to the first break, with a 72 finish giving the Dutchman a 3-2 advantage. A ten darter pulled the two time world champion back to parity, and “Jackpot” struck the first break of the contest with an 88 finish, but then proceeded to miss eight darts at double to allow Noppert to level at 4-4. A 107 on double 18 then moved Noppert in front, but Lewis overcame more missed doubles to level going into the second break.
A 120 finish ignited the Stoke throwers charge as he broke to move ahead, but he surrendered his advantage immediately as Danny cleaned up 48 for 6-6, averaging just 84 in the process. A 70 finish continued the succession of breaks as Lewis went back in front, but he held with a 62 checkout and then broke again with a 64 outshot to open up a three leg advantage. Noppert’s challenge was fading fast as Lewis stretched his lead to 10-6, but a 64 checkout kept him in the hunt. A 180 kicked off leg 18 for Lewis to ease his fears, and when he followed with a 140 he was nearly home and hosed. An 86 finish and an eleven darter sealed the win, and Lewis’ renaissance continues.
Waiting for Lewis in the quarter finals will be Dimitri van den Bergh, and he made the quarter finals in his debut Matchplay with a come from behind 11-9 win against Joe Cullen.

van den Bergh kicked off the match with a 105 checkout, and tied the contest at 2-2 with a 118 finish on double 19, but Cullen took the lead into the break, having taken a trip to the madhouse to do so, and break the Belgian’s throw in the process. A 74 finish moved his advantage to 4-2, and a 180 kicked off leg seven, and he wired the bullseye for a 170, before returning clean up 25 to win his third leg in a row. “The Dream Maker” broke straight back to reduce his deficit to 5-3 with a 138 finish, his third ton plus finish in as many winning legs, and closed to one behind with 48 completed in three darts. The comeback should have been complete, but Dimitri missed five darts at double to hand Cullen a 6-4 lead.

van den Bergh shook the disappointment off to trail by one again, but missed three clear darts at double 12, and then watched Cullen hit double eight last dart to keep the buffer at two legs. Worse was to come for Dancing Dimitri, as Cullen rattled in an 11 darter for 8-5. Two missed darts at tops gave the break back in the next leg, and double one came to his van den Bergh’s aid to peg back to 8-7, and he was level when the Bradford man missed three at 32 to allow the Belgian to level the contest on tops. A 104 finish then took van den Bergh into the lead, but Cullen roared back to parity with a 118 finish to make it a combined six ton plus finishes in the match. After pinning double four with his last dart in hand, van den Bergh nervily missed a dart at tops to take the match, and then three more at 20, before clinching a last eight berth on debut finishing 14 in three darts to take a gutsy win. A 93.19 average proved enough to come through.

“At the end of the game, I wast feeling comfortable anymore, but I kept believing in my ability” said van den Bergh post match. “I had a bit of luck on my side. It’s all about experience. I didn’t expect to win at the end, but I pulled through”.

The quarter finals get underway tomorrow night over an extended best of 31 leg distance.