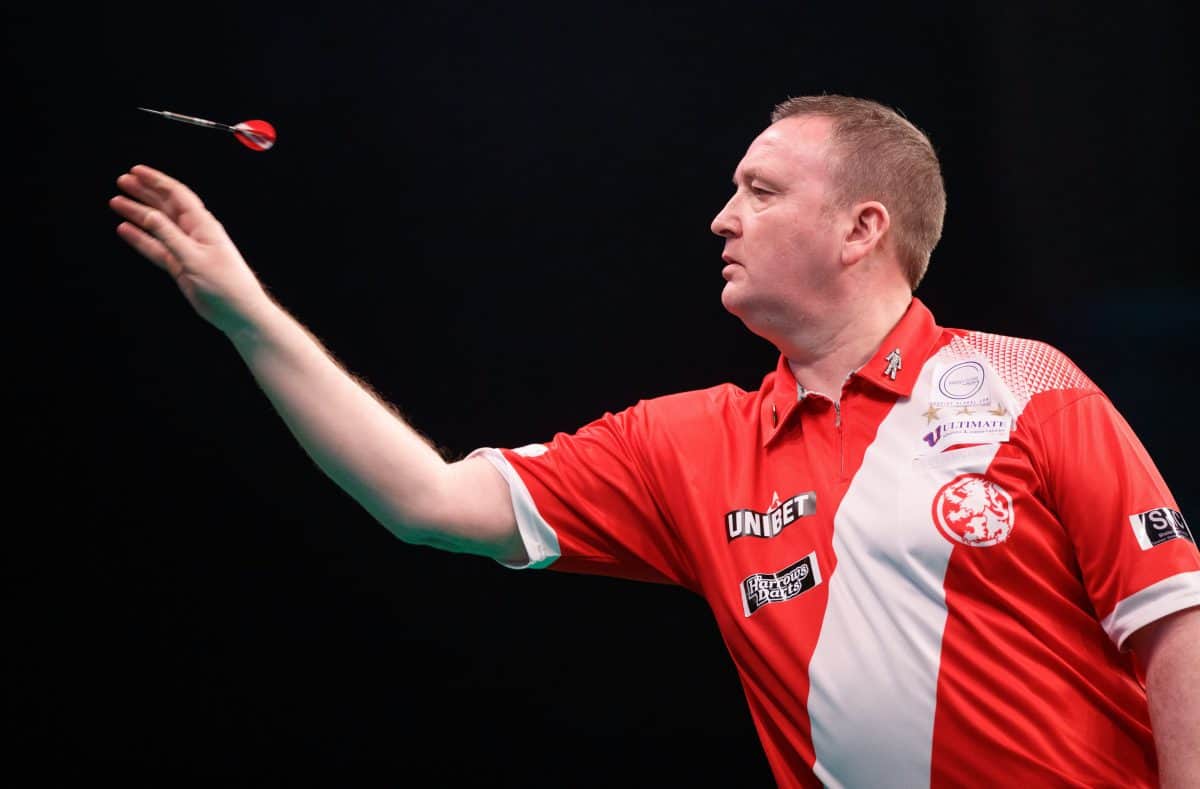 ‘Duzza’ has been the focus of much attention recently following a historic Lakeside triumph, a successful visit to PDC Q-School, selection for Premier League ‘contention’ and his ProTour debut. Two first round exits were sandwiched by a runner-up spot to Dave Chisnall last Sunday, but at Players Championship 4 he saw off big names in Joe Cullen, Mensur Suljović and Gerwyn Price before beating Dimitri Van den Bergh 8-3 in the final to seal a first PDC title at just the fourth attempt.

The final was slightly lower quality than some of the scintillating darts we saw in Wigan, but both players still averaged in the high 90s. Two 18-darters and a 15-darter were enough for Durrant to ease ahead early on and go some way to banishing the demons of that agonising last-leg defeat to ‘Chizzy’ at Players Championship 2. Three two-treble visits to Van den Bergh helped him to a 13-darter and a foothold in the match, before Durrant found a 13-darter of his own to move 4-1 ahead.

The Belgian’s first 180 of the match came in the sixth leg and allowed him to take out 50 for another five-visit leg and to hold throw once more. However, the Middlesbrough man replied with a 19-darter to restore his three-leg advantage. The game was quickly becoming a succession of holds as ‘The Dream-maker’ denied a fantastic leg from Durrant with a 72 checkout for a 14-darter. However, Durrant then reeled off three straight legs, and won the title on double 18 to seal a cheque of £10,000, another rapid rise in the PDC rankings and a tentative spot in the World Matchplay, his main aim for his first year in the PDC.

A stunning day in Wigan didn’t see any nine-darters as has been one of the main themes so far on the ProTour, but there were still some astronomical averages and huge shocks. Kyle Anderson posted the highest average of the day, a 111.3 in his whitewash of Luke Woodhouse, and the ‘Original’ made it to the quarter-finals to continue a solid start to the year, while John Henderson’s 109.5 was enough for a 6-1 win over Jamie Bain on his way to another quarter-final appearance.

Eventual champion Glen Durrant was involved in a stunning semi-final with Gerwyn Price, with all 10 legs won in fifteen darts or below during a 7-3 success for ‘Duzza’ He averaged 109.3, wile Price’s 103.4 was one of three ton-plus averages on the day for the Welshman. Rob Cross produced his best run of the 2019 ProTour so far, making it all the way to the semi-finals courtesy of some outstanding performances before he was stopped by an inspired Van den Bergh.

The youngster’s first senior PDC ranking final was the culmination of a fantastic weekend which saw him make the last 16 on Saturday and beat the likes of Chris Dobey, James Wade and of course Cross on Sunday. He’s now in line to move into the top 32 for the first time in the next few weeks, and will surely rise even higher if he can continue this new-found floor form and qualify for more of the big TV tournaments.

World number one Michael van Gerwen hadn’t been at his best all weekend, apart from the final yesterday, and following serene passage to the last 16, he came up against World Championship semi-finalist Nathan Aspinall. ‘The Asp’ took a scrappy first leg, but after that his finishing was sublime, and he went on to thrash the best player in the world 6-1 despite having a slightly lower average. As is often the case with MVG’s victors, Aspinall lost his next match, a fightback against Gerwyn Price not enough for a place in the semi-finals.

However, a successful day for the Stockport man as he builds on his incredible Ally Pally campaign. There were also runs to the quarter-finals for 18-year old Bradley Brooks and YouTube sensation Matthew Edgar, while Adrian Lewis completed a relatively successful return to ProTour action with a run to the last 16. Of the Premier League players, Michael Smith and Mensur Suljović also made it to that stage while a promising run for James Wade ended in the last 32.

More shocks came in the very first round as Tipton pair Scott Baker and Jamie Hughes saw off Daryl Gurney and Peter Wright respectively, while Simon Whitlock’s woeful start to 2019 continued with a 6-4 defeat to Darius Labanauskas. The PDC scene continues on Thursday as the Premier League rolls into Dublin, before the weekend sees qualifiers for European Tours 1-2 on Friday, followed by Players Championship 5 and 6 at Barnsley Metrodome.