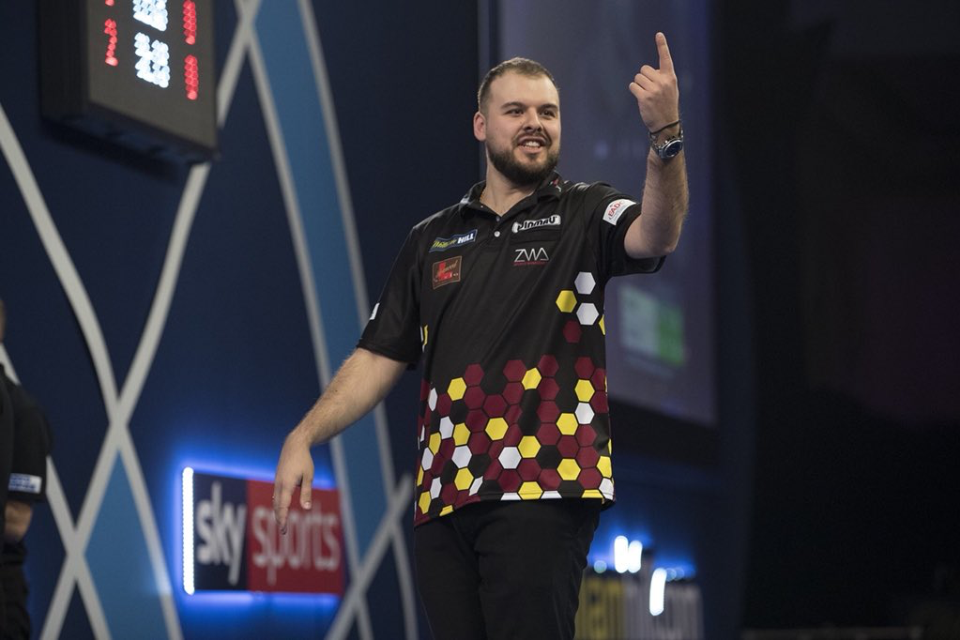 Edhouse and Koltsov winners in second day of Challenge Tour

Ritchie Edhouse and Boris Koltsov were the winners on the second day of the 2019 Challenge Tour season, coming through a tough field during another marathon day which lasted almost 12 hours.

Ritchie Edhouse was the victor of the third Challenge Tour of the season, defeating Scott Taylor 5-3 in the final to earn his second win on the PDC circuit. Former tour card holder Edhouse came through difficult ties against Michael Rasztovits, Zak Cross, Jimmy Hendriks, Berry van Peer, Darren Johnson and Ricky Williams to make his way into the quarter finals. His opponent was former BDO World Trophy runner up Jeffrey de Graaf, but Edhouse made light work of him to win 5-1 and set up a tie with Andrew Gilding. Gilding had defeated Mick Todd 5-1 in the last 8, who had made his third consecutive quarter finals showing remarkable consistency. Ritchie came out on top 5-3 to set up a clash with Scott Taylor, another man who has just lost his tour card. Taylor defeated Mike Whitehead, Diogo Portela, Stephen Gallimore, Nathan Rafferty and Peter Mitchell to set up a last 8 tie with Andy Hamilton, where he averaged a remarkable 106 in a 5-3 win. He dispatched of the Swede Dennis Nilsson in the semi finals to reach his second Challenge Tour final. In a high quality contest, Edhouse took a 3-1 lead, without a leg being won in over 15 darts. Ritchie pinned a massive 170 checkout to go within a leg of the match, and although Taylor pegged it back to 4-3, Edhouse was not to be denied. With a superb 147 finish, he claimed his first PDC triumph since 2016 and earned £2000 in the process.

After his last 16 yesterday, Andy Hamilton went one better today, reaching the quarter finals after defeating John Part in a superb tie. The Hammer led 4-3, but Darth Maple rolled back the years to check out a 170 finish and send it to a decider. However, Hamilton held his nerve on double 16 to win through to the Last 8, where he was defeated 5-3 by eventual runner up Scott Taylor. Wes Newton made the last 32, where he was also beaten 5-4 by Hamilton, but Kevin Painter once again failed to cash. The Artist would not enter the fourth event, meaning he left Wigan empty handed over the 2 days. Matthew Dennant put in the performance of the day, averaging an incredible 119 in beating Scott Dale 5-1. Scott Waites was beaten 5-4 in the last 64 by Daniel Ayres, while the likes of Jamie Caven, Lisa Ashton, Richie Burnett and Diogo Portela all failed to cash in.

Boris Koltsov came out on top in the fourth tournament of the weekend, defeating Dave Prins in a deciding leg to claim his first PDC title. The Russian defeated Fabian Freitag, Eddie Lovely, Nick Fullwell, Jason Marriott, Wesley Plaisier and Danny van Trijp to reach the semi finals, without dropping more than 2 legs in any match. He comfortably dispatched of Jason Askew 5-2 to set up a tie with Dave Prins in the final. Prins had seen off Melvin de Fijter, Ricky Clarke, Chas Barstow and Darren Williams, before defeating previous winner Ritchie Edhouse 5-3. He dispatched of Darren Johnson and David Ladley 5-1 to book a clash with Koltsov. The game went on throw until the sixth leg when Koltsov broke the Prins throw, but Dave fought back to level the match and send it to a deciding leg. The Russian had the darts and used them to his advantage, checking out 12 to claim the £2000 first prize.

Elsewhere, Peter Jacques fired in a spectacular 9 darter while defeating Radek Szaganski 5-3 in the last 64, checking out 141 for the perfect leg. Andy Hamilton made another impressive run to the Last 16, but overall it was a bad evening for the old guard, with John Part, Scott Waites, Jamie Caven and Wes Newton all exiting in the first round to leave empty handed. Fallon Sherrock and Lisa Ashton were the best of the ladies in action, with both picking up £50 in their runs to the Last 64.