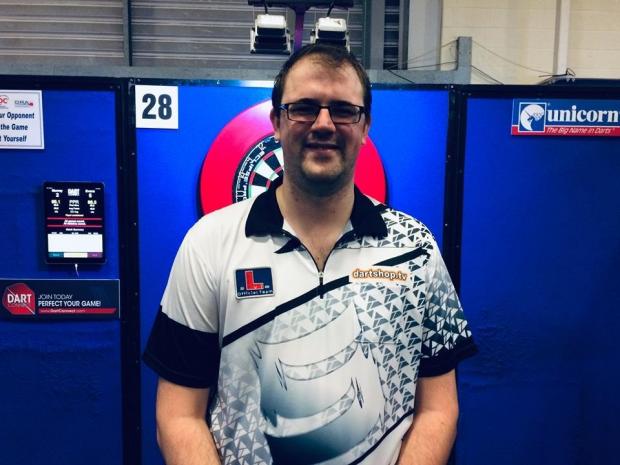 David Evans triumphed in Group Two of the newly-established Modus A Night At The Darts with an unbeaten string of showings on Tuesday evening.

Evans, who sealed overall success in last week’s Icons of Darts Live League, dropped a mere seven legs on his way to topping the pile in a prolific performance.

The BDO World Championship quarter-finalist kicked off proceedings with a 5-3 win over Ritchie Edhouse, pinning five of his six attempts on the outer ring and averaging a tournament-best 107.71.

Edhouse also performed superbly well in a high-quality affair, with the former PDC Challenge Tour event winner hitting a magnificent 164 checkout and averaging over 106 himself.

‘Stretch’ pulled off five combination finishes in his win over the five-time champion of the world, with a 130 outshot being the pick of the pack.

A rematch then occurred between the high-flying Wessel Nijman and Evans, with the latter gaining revenge on his online darts enemy, despite squandering 14 darts on the outer ring.

Elsewhere, van Barneveld, who beat Phil Taylor last Thursday in a match which raised a staggering £14,000 for NHS health workers, returned to form with victories over Nijman, Mitchell and Edhouse.

The doyen of Dutch darts finished second in Group Two, with his defeat to Evans costing him a maiden group success.

After making his debut in the new initiative, the 2015 BDO world champion, Mitchell, sits bottom of the table after managing just a solitary victory on the day.

Similar to Mitchell, Monday’s Group One winner Nijman picked up just two points from a possible six, with his only victory coming against ‘Scotty Dog’.

The emerging Dutchman pinned a mesmerising 154 finish and averaged 102.68 in a 5-2 victory over the PDC Challenge Tour leader.

Modus’ A Night At The Darts will resume from 6pm on Wednesday evening as Martin Adams returns to action in replace of his fellow legend van Barneveld.

A Night At The Darts consists of daily coverage coming directly from players’ homes in order to provide darts fans with world class entertainment during these unprecedented times.

Mark Webster will be providing expert commentary on Wednesday with coverage being streamed via a number of bookmakers’ websites and free of charge via dartshop.tv.

David EvansModus A Night at the Darts

Thibault Tricole: ‘The French media are more and more interested in darts. I have hope’