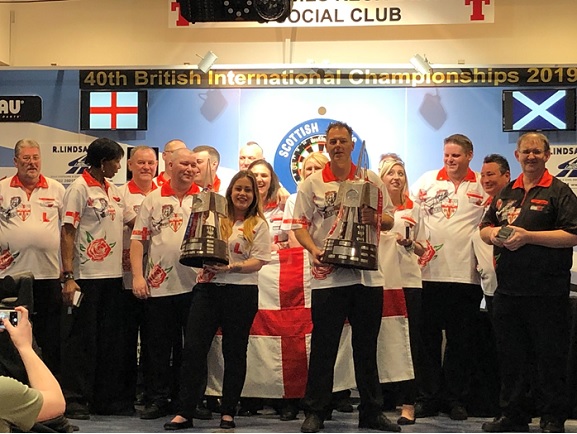 It was a sensational weekend for England in Glenrothes this weekend, as they took home three of the top four prizes at the 40th British internationals, setting three new records in the process.

The men’s competition began on Saturday afternoon, with Scotland and Wales playing out a 6-6 draw. The contest’s highest average was recorded by Welshman Arwyn Morris, who registered an average of 94.17 in a 4-3 win over Scott Robertson. Others to impress were BDO stalwart Ross Montgomery who beat David Rogers 4-1 and Darren Bingham, who down recent Isle of Man Classic semi-finalist Jim McEwan 4-2.

Wales put themselves in a commanding position to win in the men’s competition on the Sunday, racing into a 5-2 lead against England courtesy of some exemplary darts. Particularly notable was Nick Kenny, who needed just 57 darts to beat Paul Hogan 4-0. England responded, however, with captain Scott Mitchell and Martin Adams recording 90-plus averages to pull it back to 6-5 before Lancashire’s Martin Atkins held his nerve to beat Tim Jones 4-3 win and secure a 6-6 draw.

That left it all to play for in the final fixture of the competition and it was England’s men who were triumphant, beating a determined Scotland 7-5. Mitchell powered England into the lead in the seventh game of the match, cruising past Dutch Open finalist Ryan Hogarth 4-0 with a 111.3 average, a new competition record . Scotland captain Alan Soutar responded in the next game, recording a 96.72 average, his side’s highest average of the match, as he beat Cambridge thrower Dennis Harbour 4-2. That restored parity at four all but England kicked on and won it in the final game, Wes Newton beating Alan Small 4-1.

In the ladies competition, England were almost perfect, winning 11 of their 12 games. They recorded a 6-0 whitewash against Wales, Fallon Sherrock impressing in her 3-2 win over Ann-Marie Potts. That was followed up by a 5-1 win over Scotland on the final day of competition, as recent Slovak Open winner Maria O’Brien starred in her victory over Susanna McGimpsey with an 80.52 average. Like Paul Milford in the men’s competition, young Kent thrower Casey Gallagher won both her games on debut. In the other ladies fixture, Wales beat Scotland 5-1.

In the boys competition, it was an increasingly familiar story for darts fans – all the headlines were about the prodigious talent that is Leighton Bennett. The 13-year-old BDO World Youth Champion set a new boys record average in his England debut on Friday night, smashing in a 107.37 against Wales’ Sion Russell in a 3-0 win – fifth on the all-time average list in this competition’s 40-year history. Bennett recorded a much more pedestrian 88.41 in his second game in England colours but it was enough to beat Kyle Walker 3-0 as England followed up their 3-1 victory over Wales by beating Scotland by the same scoreline. Scotland finished second in the boys competition, having beaten Wales 3-1 in the tournament’s opening fixture.

England’s Shannon Reeves and Beau Greaves had to settle for the runners-up spot in the girls tournament but it was Greaves who stole the show. Greaves broke the girls youth average on Friday, firing in an 85.08 as she beat Scotland’s Sophie McKinlay 3-0. 15-year-old Greaves, nicknamed ‘Beau N Arrow’, then smashed her own record the next day, beating Jasmin Dean 3-0 with a 92.01 average. Averages, as they say, are not everything though as Scotland won the competition by virtue of having a better leg difference than England.

All in all, a very successful weekend for England at the prestigious British internationals. Credit goes to the tournament organisers for providing streamed coverage of the entire competition, and the hard-working officials.