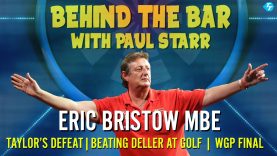 On this week’s ‘Behind The Bar’ 5 times World Darts Champion Eric Bristow MBE joins Paul Starr from Ireland and shares his thoughts on The World Grand Prix Of Darts 2016 so far as well his predictions for the final this Saturday on Sky Sports. Eric explains why he thinks Phil Taylor won’t be retiring anytime soon ( after Taylor was ordered to pay his estranged wife £830,000 ) in a humorous way.

Picture used in the Thumbnail have been provided by www.tiptoppics.com

Pictures in the video are by Lawrence Lustig/PDC