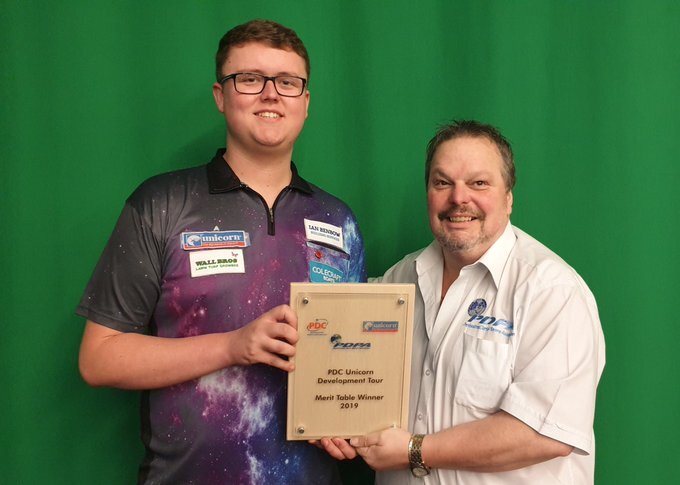 Ted Evetts and Luke Humphries won two titles each on the final weekend of Development Tour action for 2019 as the players heading to the World Championship and the players gaining two-year Tour Cards were confirmed.

‘Superted’ has dominated the tour this year, winning a tournament on every single day he has played, skipping one weekend. It was no different in the final four events as the Warwickshire thrower made three finals, winning two to finish the year with an incredible tally of 8 Development Tour titles.

He ended the season more than £7000 clear of his nearest challenger, Luke Humphries. With the top three on the Order of Merit already being secure for the Tour Cards next year, it means that Ryan Meikle has been handed a lifeline despite being set to finish the year outside the top 64.

‘The Barber’ and Ciaran Teehan will have Tour Cards for the next two years, with Geert Nentjes and Teehan taking spots at the World Championship. Meikle is set to qualify for Ally Pally through the ProTour.

As the final four Development Tour events took place the weekend before the World Youth Championship, we saw a few more players than normal as international qualifiers stepped up their preparations for Monday’s tournament.

Zong Xiaochen, Maxim Aldoshin, Martin Schindler (Sunday only) and Dawson Murschell were amongst those in attendance, but it was the regular names who made it to the back end of Event Seventeen.

Ted Evetts averaged 100 in his semi-final win over Rhys Griffin with Luke Humphries easing past Ben Cheeseman to set up a showpiece final, which ‘Cool Hand’ won 5-2 with a 102 average for his 10th Development Tour title.

There was a quick turnaround for Event Eighteen, James Beeton hitting a 9-darter on his way to the quarter-finals, where he was defeated by Cheeseman who was enjoying a fantastic day.

Tour Card holder Mike van Duivenbode made it to the last four only to lose to Evetts, while Greg Ritchie reached a third final of 2019 with a 5-3 win over Cheeseman.

The Scotsman had been beaten by two English Tour Card holders in his previous final, and Evetts made it a third with a narrow 5-4 success.

Onto Sunday’s action then, and there was a more international feel to the latter stages of Event Nineteen, China’s Zong losing in the last 16 and Patrik Kovács of Hungary reaching the quarter-finals.

In the semi-finals, Evetts saw off Rusty-Jake Rodriguez in a last-leg decider and Ciaran Teehan beat Berry van Peer 5-2.

Although Teehan fell to Evetts in the final, it would turn out to be a life-changing tournament for the Irishman as that was the run which ended up sealing his World Championship place and two-year Tour Card.

In the final event of the year, Dan Read produced a huge upset by defeating Evetts 4-2 in the last 16 to ensure ‘Superted’ finished the year on just the eight titles.

Read was then whitewashed in the next round by Kevin Doets, who was eliminated in the semi-finals alongside world number 55 Martin Schindler.

It was another final featuring two Tour Card holders, this time Luke Humphries saw off Geert Nentjes 5-3 to win his second event of the weekend, Nentjes booking his spot in a second World Championship.

That’s it for the Development Tour this year, the likes of Humphries, Ritchie, Shane McGuirk and Mike De Decker are ineligible in 2020 so we could see some fresh names emerge as Evetts looks to overtake Dimitri Van den Bergh for the most titles on the tour.