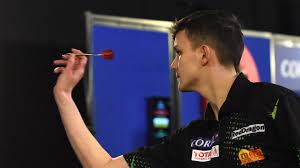 Ted Evetts and Nathan Rafferty were the winners as the 2019 Development Tour season got underway in fine style in Wigan today. There were a total of 11 tour card holders in the field, just proving the strength in depth that is to be found anywhere on the PDC circuit.

Ted Evetts came out on top in the first event of the season, thrashing Nathan Rafferty 5-0 in the final with a superb 103 average. It was a dominant display from ‘Super Ted,’ who was pushed the most in the Last 32 by an inspired Ciaran Teehan, eventually coming through 4-3. He saw off Bradley Brooks, Benjamin Smith and Geert Nentjes en route to the final, before defeating the ever impressive Rafferty. Nathan was pushed closest in the Last 64 by Josh McCarthy, but really got into his stride in the Last 16, where he averaged almost 104 in hammering Callum Matthews. He fought past Harry Ward and Anthony Davidson before being defeated by the excellent Evetts in the final.

Nathan Rafferty went one better in the second event of the day, defeating Aiden Cope 5-2 in the final to claim his second Development Tour title. Nathan made his way into the Last 16 with relative ease, before surviving match darts against Bradley Brooks to win through 4-3. He produced a dominant display to hammer Jeffrey de Zwaan 5-0 in the quarter finals, before seeing Wessel Nijman and Cope to claim the title. Aiden Cope was the surprise package of the day, seeing off numerous star players including Derk Telnekes, Rusty-Jake Rodriguez and Luke Humphries on his way to the semi-finals, where he squeezed past the Youth World Master, Keane Barry, 5-4. Rafferty proved too much, but it was a very impressive run from Cope, who’s best previous result on the tour had been the Last 16. Keane Barry’s incredible 109 average in a demolition of Owen Roelofs was the best of the day, the Irish youngster really showing his class. Nathan Rafferty currently tops the order of merit on £3,000, with Evetts, Cope and Geert Nentjes his closest challengers.