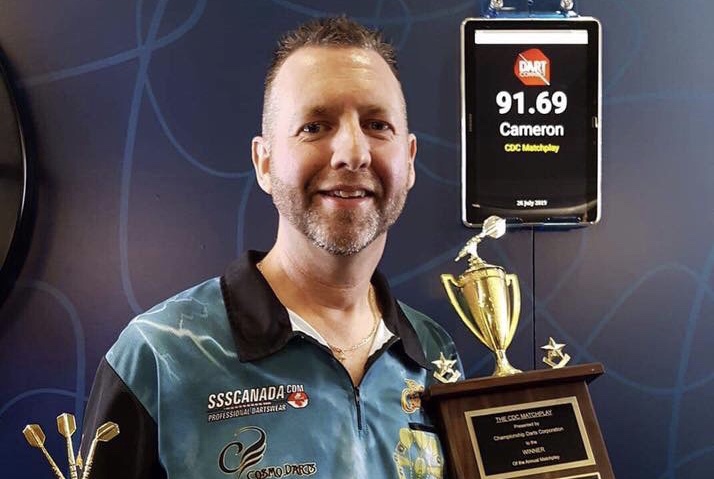 Rob Cross lifted his second major title at the weekend as the World Matchplay took place at Blackpool’s historic Winter Gardens, but he wasn’t the only Matchplay winner.

David Cameron reigned victorious across the pond in Nashville, Tennessee at the CDC Cosmo Darts Matchplay.

Cameron, who will appear at the BDO World Championships for a seventh successive year after topping the Canadian rankings, has undergone a title-drought in recent times on the CDC tour, but lifted the first of two ‘special events’ held in Nashville.

‘Excalibur’ saw off former World Championship quarter-finalist and UK Open qualifier, Roger Carter, to get his campaign afoot, before dethroning defending champion, Leonard Gates, with a 6-3 triumph and 95.8 average to book his place in the quarter-finals.

Another scintillating showing saw Cameron thrash Chris White 6-1, which was followed by his worst performance of the day in beating a determined Danny Pace in the last four.

45-year-old Cameron would regain his blistering form going into the final, and despite it remaining close in the early stages, the Canadian trounced Danny Lauby 6-1 to lift the Matchplay.

“It’s a nice win,” Cameron said, “especially for Cosmo with them being my sponsor. It’s a nice feeling.

“I felt good all day, I played well and had class finishes and stuff like that, and beyond that I wanted to win it.”

North Sydney’s Cameron will make his seventh successive Lakeside appearance in January, and he is extremely confident to say at the least going into the event.

“I’m looking forward to winning it [the BDO World Championship] at some point, I had a great run there last year, and when my game shows, my game shows up.”

Elsewhere in Nashville, North American darts champion Danny Baggish was denied at the semi-final stage as he made his CDC debut. The Florida-based thrower saw off the likes of George Daniels and Joe Chaney, before losing out to Lauby.

Former World Matchplay champion Larry Butler lost out in the third round, while his former USA World Cup of Darts teammate Darin Young departed at the second hurdle.

The Championship Darts Circuit will return in the coming weeks with the Main Tour resuming in Chicago.