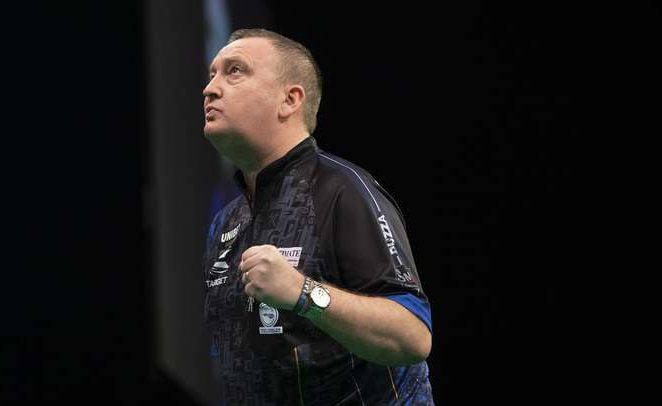 Glen Durrant has labelled Fallon Sherrock as the ‘weakest’ of the nine Challengers ahead of their Unibet Premier League clash on Thursday evening in Nottingham.

The lowest ranked of the nine full-time Premier League competitors, Durrant, faces the global sensation Sherrock – who made history in becoming the first woman to win at the World Championship in December.

Both Durrant and Sherrock made their PDC World Championship debuts two months ago at Alexandra Palace, with the former embarking on a fourth major quarter-final since joining the PDC ranks and the latter carving a slice of history.

Middlesborough’s Durrant was selected to perform in front of darts’ largest crowds across Europe on New Year’s Day after performing extraordinary during his maiden season on the professional circuit.

On the other hand, Sherrock was awarded a one-night only Premier League debut as a challenger solely based on her unprecedented exploits in North London.

‘Duzza’ will be forced to contend with not only Sherrock’s darting ability but also thousands of spectators in favour of the Queen of the Palace.

“This will test every bit of mental strength I have. It’s another challenge,” Durrant told Teesside Live. “She’s the weakest challenger but it’s the most difficult match. That’s absolutely nothing against Fallon but when you look at the other players, Bunting, Henderson, Dobey, Fallon is the weakest player.”

He added: “When you incorporate the crowd and the media interest, it suddenly becomes a game none of the Premier League players will have wanted. I’ve got to deal with it, I’ve got to deal with a huge crowd booing me – which has never happened before, but that’s all part of the challenge.”

Glen Durrant guarantees himself his first ever Premier League point! He's one away from victory and Smith has it all to do… pic.twitter.com/C68A3orDyu

Durrant, who was millimetres away from falling short of a PDC tour card last January at Qualifying School, leads the way in the Premier League standings.

An impressive victory over former World Championship and Premier League finalist Michael Smith got his campaign off to the best possible start.

Speaking to metro.co.uk earlier this week, Durrant confirmed he’s not looking forward to thousands of people booing him or facing Sherrock in general.

“It’s a draw you dread,” he said. “I’m looking to it as just another challenge, but I’ve never played in a game with five-ten thousand people booing me.

“It could have been who they wanted to put against Fallon. Maybe I’m the right fit as a debutant coming in, it potentially could be a very close game now with the connotations of the crowd against a debutant, it could be an interesting game.

“When the adrenaline is flowing, you’re taking particular stick, you can hear one voice, I’ve reacted before. When it’s 5,000 people giving you stick, I don’t know how I’m going to react, but it’s just part of life’s challenge.

“I think the worst thing I could do is react to the crowd, put my hands behind my ears etc. I’ve decided not to wear earplugs because I’ve never worn them before and I’m worried it could effect my balance.”

On his way to a maiden PDC World Championship quarter-final in December, Durrant faced his good friend and fellow North East thrower Chris Dobey, running out victorious in the first meeting between the two.

The three-time champion of the world was sincerely hoping of a rematch with World Grand Prix semi-finalist Dobey at the Utilita Arena in Newcastle, instead of a Nottingham clash with Sherrock.

“I’m very proud of what Fallon’s done, but Chris Dobey in Newcastle was the ideal,” alluded the 49-year-old. “That would have been fantastic for North East darts. I can’t say I’m looking forward to Fallon.

“The PDC never said I was getting the Dobey game, I just put two and two together. I thought the Middlesbrough and Newcastle fans together, it would have been something to talk about for people in the North East and it could have been a good thing for darts.”

Glen Durrant faces Fallon Sherrock on Thursday evening in Nottingham in a contest that will be watched by thousands, potentially millions worldwide.