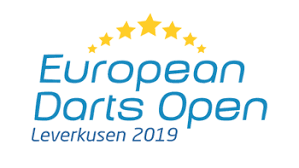 Raymond van Barneveld’s return to the European Tour will see him face Steve Beaton in Leverkusen, with the winner going on to play Rob Cross as the draw for the 2019 European Darts Open was confirmed, followed by the final qualifiers.

It has been over five months since Michael van Gerwen beat James Wade to finish the 2018 European Tour season with eight titles, a campaign which saw four saw winners on the continent. The likes of Rob Cross and Joe Cullen are still without a title in Europe, while PDC newcomer Glen Durrant will be fancied by many to pick up a title sooner rather than later, especially with world number one Michael van Gerwen not at his best.

The final qualifiers for a place in ET1 were held at the Ostermann Arena on Thursday evening, and the theme carried on of surprise qualifiers as the seven UK players without a Tour Card and European Tour debutant Pavel Jirkal were joined by two Dutch debutants in Wesley Plaisier and Danny van Trijp, while Jyhan Artut is set to make a long-awaited return to the PDC stage. Fabian Herz will continue his quest for a European Tour win against Scott Taylor, while youngster Nico Kurz faces Kim Huybrechts in his ET debut.

Veteran Michael Rosenauer completed the field and will take on Glen Durrant on Friday evening with the winner set to meet Jermaine Wattimena. That means there’s the potential for a battle of the two World Champions in the last 16 should ‘Duzza’ come through and ‘MVG’ beat either Mervyn King or Jason Wilson. The Euro Tour season gets underway with two players in danger of losing their Tour Card at the end of the year, Justin Pipe and Ryan Meikle, while a couple of rising stars take to the stage in the third game of the tournament in Matthew Dennant and Madars Razma.

Other intriguing clashes see Wayne Jones take on Vincent van der Voort, Matthew Edgar face Krzysztof Ratajski and Jeffrey de Zwaan meet Josh Payne. On Saturday, Simon Whitlock will look to resurrect his disappointing year with a win over one of Ross Smith or Ricky Williams, while Darren Webster is guaranteed to face a European Tour debutant in either Pavel Jirkal or William Borland.

In form Ted Evetts has a date with the Leeds version of Martin Atkins and next Wednesday’s Premier League ‘contender’ Dimitri Van den Bergh takes on Challenge Tour leader Ritchie Edhouse for the right to play Adrian Lewis. The action kicks off at 1200 GMT with the Friday afternoon session headlined by Euro Tour debutants and the evening featuring a whole host of big names, including Raymond van Barneveld fresh from his first Premier League victory of the season.

Interview with Gary Elliott ahead of the Celtic Cup Challenge