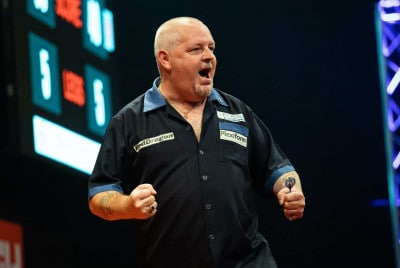 On a busy day in Wigan, following the conclusion of the PDC Youth World Championships that were played down to the final earlier today, the final BoyleSports Grand Slam of Darts qualifiers have been confirmed.

Former Grand Prix and UK Open Champion, Robert Thornton gave his hopes of remaining a PDC Tour Card holder a much needed shot in the arm as he made it through the 100 plus man field to qualify.

“The Thorn” overcame Jermaine Wattimena 5-3 to book his place at the Aldersley Leisure Centre in Wolverhampton this weekend. Thornton had earlier defeated Max Hopp 5-3 with a 106.2 average, and then booked a meeting with Wattimena with a 5-2 win against Cristo Reyes.

Adrian Lewis also grabbed a much needed boost as he safely negotiated the qualifying minefield to book his place in the Black Country.

“Jackpot” took out Madars Razma and Terry Temple by 5-1 scorelines, before a 100 average saw off Steve West 5-3 in the final round.

The qualifying stages always usually produce a surprise, and Ryan Harrington came through against Ronny Huybrechts, Ted Evetts and Jeffrey de Zwaan, before edging out James Wilson 5-4 to reach the tournament proper.

A 112 average powered Brendan Dolan through to a 5-1 win against Arron Monk in the final round. Dolan had previously accounted for Dirk van Duijvenbode, Devon Petersen and Joe Cullen.

Ross Smith continued his good form from the recent European Championship, as a 5-0 win against Niels Zonneveld with a 100.2 average saw the Kent man safely through. Smith had previously beaten Jose Justicia and Wayne Jones 5-1, and then produced a 103.3 in a high quality 5-3 win against Stephen Bunting to reach the final round.

Gabriel Clemens beat Ricky Evans 5-3 to clinch a spot at the slam, while Darren Webster edged out Matt Clark 5-4 to also win through.

Czech Open Champion Jamie Hughes shrugged off his recent injury troubles with a 5-3 win against Darius Labanauskas to complete the field.

The Grand Slam gets underway this Saturday, and runs for eight days.