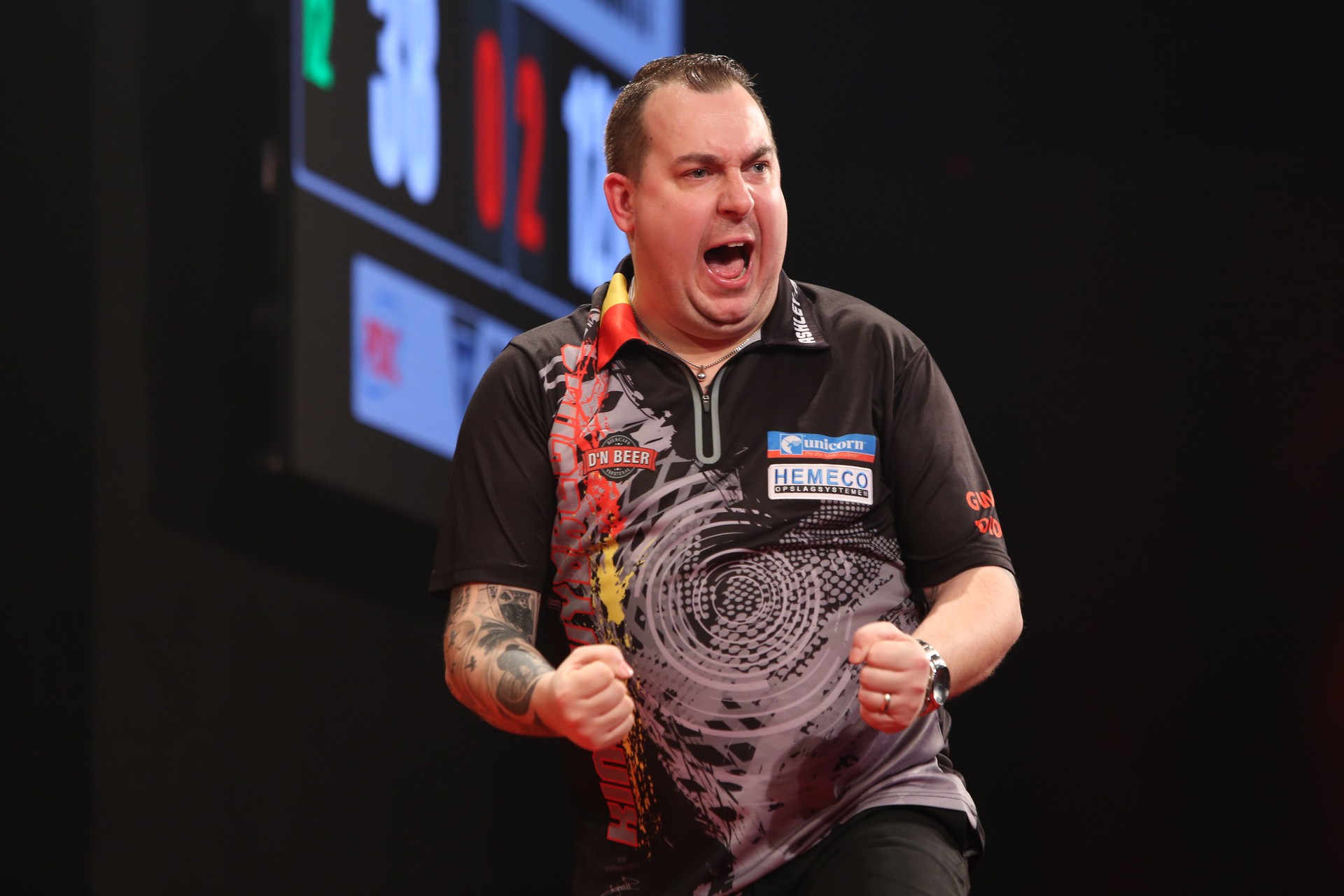 Former Premier League player Kim Huybrechts was among four Belgians to make it through to the last 32 as the first ever PDC European Tour event in Belgium got underway.

Huybrechts and Belgian number one Dimitri Van den Bergh received automatic places in the tournament under the new qualification structure for 2020, but it meant they needed to win their first-round match to register any ranking points.

Both did so without hitting their respective top levels as Huybrechts saw off Ryan Harrington 6-2 and Van den Bergh beat European Tour debutant Derk Telnekes 6-3.

Mike De Decker was the other Belgian to progress to the last 32 as he defied 4 180s from Ron Meulenkamp to steal it in a decider. A maximum to leave double 12 proved the difference for ‘The Real Deal’, who faces world number one Michael van Gerwen in the next round.

There was no such luck for Host Nation qualifiers Geert De Vos and Jeffrey Van Egdom, both losing to established top players. De Vos’ big stage return only lasted eight legs in defeat to Danny Noppert, while Van Egdom never got going and was whitewashed by Steve West.

There were two three-figure averages on the opening day at the Ethias Arena, the first from one of the many European Tour debutants in Damon Heta. He met the struggling Michael Barnard and won 6-0, averaging 102.48.

Dirk van Duijvenbode, who won his Tour Card back in January, continued his impressive start to the season with a 6-4 with over Luke Woodhouse and an average of 101.

Recent PDC title winner Ryan Searle also progressed as he beat Darren Penhall 6-3 in the first game of the day, while Andy Hamilton was another early winner after edging past namesake Andy Boulton in a final leg.

A 151 checkout from Rowby-John Rodriguez started his game with Steve Lennon in style but the Irishman recovered to win 6-3.

It was a good day for the Dutch just over the border in Hasselt as Martijn Kleermaker and Wesley Plaisier also progressed with successes over Stephen Bunting and Benjamin Pratnemer respectively.

In a potentially mouth-watering tie, Steve Beaton will face Nathan Aspinall on Saturday after ‘The Bronzed Adonis’ pulled away from Hong Kong’s Kai Fan Leung in the closing stages to seal a 6-4 victory.

That game is among a number of highlights in Saturday’s last 32 schedule with Peter Wright starting his quest to end his mini-drought on the Euro Tour against Andy Hamilton and Ian White against Dirk van Duijvenbode other notable clashes.

After relocating to Liverpool, Hong Kong’s Kai Fan Leung wants to provide a new adventure for the Asian darting community