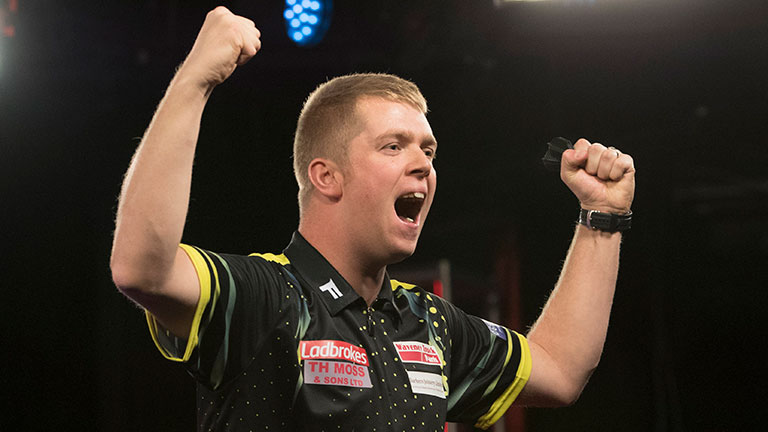 Stephen Burton’s success in Challenge Tour 8 saw him move to the top of the overall Order of Merit as Darren Beveridge, Cameron Menzies and Jesús Noguera also picked up titles in Wigan.

The second Challenge Tour weekend of 2019 saw £40,000 in prize money up for grabs across the four events, as well as lucrative incentives on offer including Tour Cards and places at the World Championship, UK Open and ProTour events. After the first quartet of tournaments, Ritchie Edhouse held a narrow lead in the rankings with Shaun Carroll, Boris Koltsov and Burton not far behind.

Those four had a mixed weekend, but all remain in the top six and should continue to top up the field for Players Championship events. On Saturday, well over 200 players arrived at Robin Park Arena to begin a gruelling two days of action, including former World Champions John Part, Richie Burnett and Scott Waites, household names Kevin Painter and Andy Hamilton, and female stars Lorraine Winstanley, Fallon Sherrock and Deta Hedman.

Due to the BDO Welsh Open weekend, some of those players could only compete on Saturday which led to those two events being even more competitive. As a result, there was a very strong quarter-final line-up despite the likes of Menzies, Edhouse and DartsPlanet.TV’s own Jason Marriott going out at the last 16 stage. Northern Ireland’s Kyle McKinstry looked impressive throughout Event Five but fell to surprise package Andy Chalmers, while Berry van Peer, Jason Cullen and Dennis Nilsson also fell in the quarters.

Former World Championship semi-finalist Andy Jenkins fell to Scotland’s Darren Beveridge in the last 4, while Chalmers was seen off by recent Development Tour winner Callan Rydz. Rydz failed to add to that title, though, as Beveridge followed up some excellent runs in 2018 with a first Challenge Tour title. Event Six saw both Van Peer and Jenkins reach the latter stages once more, only to be beaten by Boris Koltsov and Cameron Menzies respectively.

In the other quarter-final ties, Tony Mitchell beat Francis Carragher 5-4 and Andrew Gilding knocked out Danny van Trijp 5-2. Former UK Open semi-finalist ‘Goldfinger’ went on to reach the final after getting past Mitchell 5-3, while Beveridge’s fellow Scotsman Menzies saw off Koltsov 5-2. It was to be a Scottish double on the opening day in Wigan as Menzies averaged 90 in the final to win his second event on the Challenge Tour.

Sunday got started with Event Seven, and once again Andy Jenkins was in fine form, only being beaten by Stephen Burton, but once again in the quarter-finals. Scott Taylor, James Barton and Callan Rydz also lost out in the last 8, the latter to a notable performance from Jesús Noguera, who could seemingly not put a foot wrong. His stunning event continued, seeing off Burton 5-3 in the semis, which set up a final against the legendary Mark Walsh, who beat Dutchman Arjan Konterman 5-3.

However, Walsh failed to add to his impressive tally of PDC titles, only managed one leg against an incredible Noguera, who could become the fourth Spaniard on the full PDC tour if he carries on this kind of form, averaging in three figures in a trio of matches in Event Seven alone and finishing with an overall average of 99.18. He was beginning to look unstoppable as Sunday afternoon came around with Event Eight, but ran out of steam at the hands of Rhys Griffin in the last 16, leaving himself fourth in the Order of Merit.

Notable names Cody Harris and Geert De Vos had their best runs of the weekend in the final event, the latter even hitting a nine-darter on the way, but both fell in the last 16. Another DartsPlanet.TV sponsored player, Ian Withers was on a sensational run, seeing off former Tour Card holder Scott Taylor on the way to a quarter-final, although he too failed to progress any further, losing out to Patrick van den Boogaard.

Dave Prins had competed in the European Darts Grand Prix on Friday evening, but managed to get to Wigan to compete in all four events, and finally got the reward for his endeavour in Event Eight as he beat Paul Rowley 5-4 to seal a semi-final berth. That was as good as it got for ‘The Badger’, also defeated by Van den Boogaard, while Stephen Burton averaged 98 in a 5-2 win over Kevin Garcia to set up the final.

It was a slightly scrappy final, but Burton squeezed through it in a deciding leg to take a commanding lead at the top of the Order of Merit, becoming the first man to win two Challenge Tour events this season. He is £1,800 ahead of Ritchie Edhouse, with Andrew Gilding, Dave Prins and Callan Rydz the only men in the top 10 not to have won an event this year and Andy Jenkins and Mark Walsh sitting in joint-13th.

Marriott and Withers are 50th and 46th respectively, just out of reach for an attempt at European Tour qualification, but with the next Challenge Tour weekend not too far in the distance and eight more events to come after that, there are still plenty of opportunities for players at the top and bottom of the rankings to stake a claim for some of the huge prizes on offer.

MVG scrapes through with seeds scattered at Glaspalast