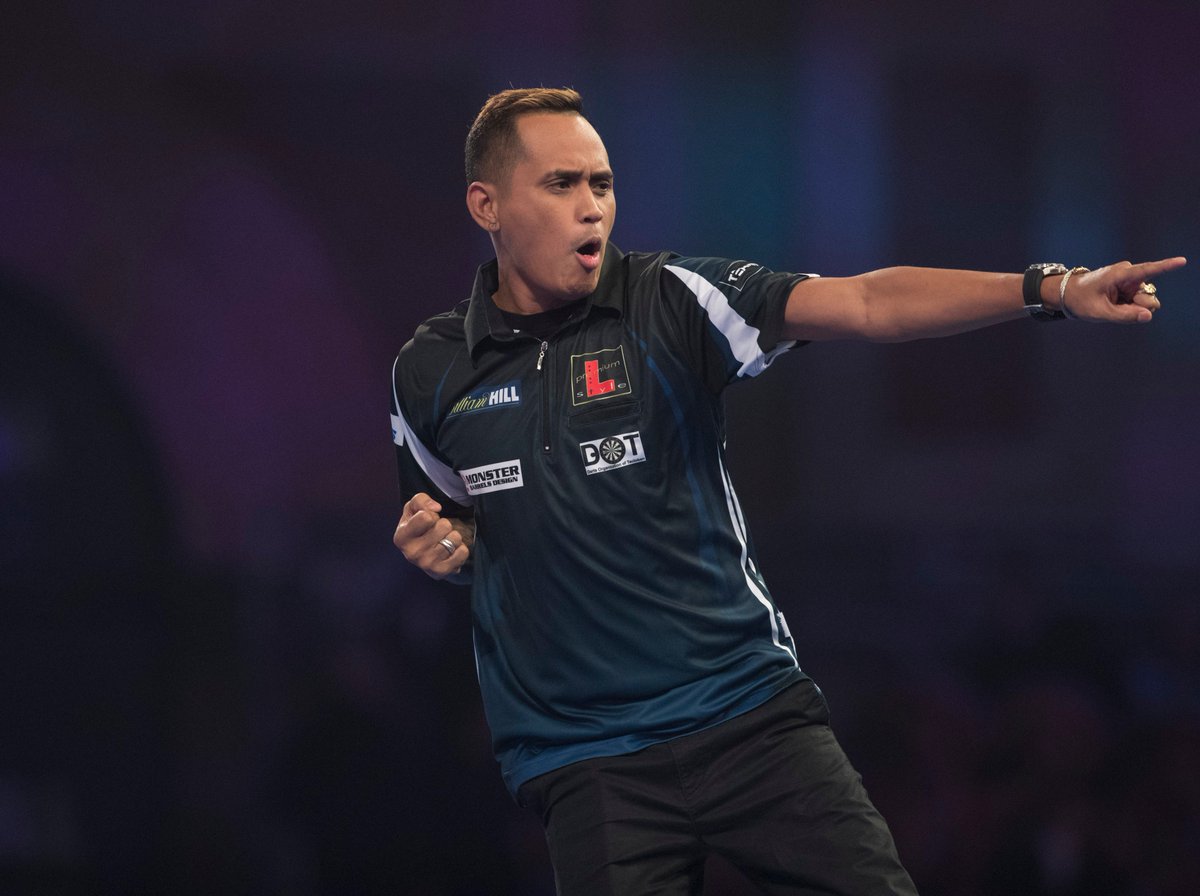 Lourence Ilagan will – on Tuesday afternoon – grace the Alexandra Palace stage for a fourth time, acting as a ring bearer for not only Filipino darts, but the sport in Asia as a whole.

Since reaching the semi-finals of the BDO World Masters ten years ago, Ilagan’s darting career has gone from strength to Istrength, winning the biggest event in Filipino history as well as dominating the newly-established PDC Asian Tour.

‘The Gunner’ has walked away victorious in seven different events on the Asian Tour over the last two years, with triumphant campaigns in Macao, China, Malaysia, Taiwan and his birth country of the Philippines.

“The Asian Tour I believe is the best thing to happen to darts in our part of the world,” said an utterly grateful Ilagan. “The plethora of talent competing against each other tour after tour has upped everyone’s game and mine included as our averages show. I was happy to top both the 2018 and 2019 Asian rankings.”

Another nine-darter on the PDC Asian Tour…

?? Lourence Ilagan completed perfection on his way to beating Noel Malicdem with a 110 average to win in Taipei.

Not only has Ilagan conjured up a hefty honours tally, he also nailed the nine-darter during the season. His compatriot, Noel Malicdem, was left star-struck after the 41-year-old averaged 110.3 and pulled off perfection en route to an emphatic 5-2 rout.

An ecstatic Filipino added: “Not only did it mean the world to me, it further validated our belief that we Asians had the skill to compete in the PDC.”

Ilagan’s opponent in that final Noel Malicdem, who himself will take to the Alexandra Palace stage on Tuesday afternoon, pinned a nine-dart finish himself during the inaugural weekend of Asian Tour action.

The PDC Asian Tour got underway this weekend, and we had our first nine-darter!

Incredible arrows from Noel Malicdem in the final in Seoul against eventual winner Royden Lam! ?? pic.twitter.com/7li98fcyQg

With eight players of Filipino descent inside the Asian Tour’s top 20 following the closing double-header, darts in the Philippines is slowly returning to the golden days it held a number of years ago.

Ilagan stated: “Darts really had quite a foothold in the late 70s until early 90s then it almost disappeared, only slowly re-emerging in the early 2000s, due in big part to the Dartslive, Bullshooter and Phoenix soft-tip tournaments concentrated mostly in Asia.

“Our talented steel players now had a venue to show their skills, be noticed by managers who funded our travels, with the helping hand of sponsors – Monster Barrel and L-Style in my case.”

Ilagan has been inspired by the likes of Phil Taylor, Raymond van Barneveld and Freddie Deen – who he described as a “master of the game in our country”, though, how did his story commence?

“Darts was truly popular [in the Philippines] some years back during my early teens in homes, pubs, clubs and even in the streets,” expressed the 41-year-old.

“The street where I lived was no exception and in one of these gatherings, while passing through, a dart hit the wire, bounced and graced my foot.

“They handed me three darts to try and I hit three bulls, even though that was the first time I threw darts. They next brought me to a tournament and I finished second.”

After making a rather brief debut at the World Darts Championship a decade ago, Ilagan assembled an aforementioned World Masters appearance.

Brian Woods, Steve West and two-time champion of the world Scott Waites were amongst those to be brushed aside by the relatively unknown Filipino.

“To reach the semi-final of the Winmau World Masters was an eye-opener for me and spurred me on to do more.”

“It was an eye opener in the sense that prior to the start of the tournament, I was a virtually a nobody. As I progressed, the crowds gathered to watch my matches.

“Then I reached the TV stages, then people were wanting to shake my hand, take photos with me, sign autographs, wanting to know where I stayed and followed me around – I did relish the attention and this in turn propelled me to up my practice, and to again prove I could achieve more.”

Subsequently, one of the richest days of Ilagan’s career to this day arrived. The Manny Pacquiao International Darts Classic. Yes, one of the most highly regarded boxers of all time was an essential part of the Manila-born man’s darting destiny.

“The tournament was the biggest during the time and sponsored by world champion boxer, Manny “Pacman” Pacquiao – the only eight division world title holder,” Ilagan alluded.

“Manny is considered one of greatest of all time, and a future hall of famer in his sport. He is also an above average dart player!”

The Cainta-based thrower trousered roughly £10,000 at that particular tournament, with another prosperous occasion in the formation of the renowned Filipino thrower we know Ilagan as today occurring four years later.

“The Dartslive 2013 World Finals triumph was a high point in my career at the time,” Ilagan smiled. “No matter what I may or may not accomplish in the future I will be most remembered by this.

“The windfall in cash allowed me the luxury to finish building our home, provide for my family members with support and enjoy things that I can now afford.”

Having never won on the famous Alexandra Palace stage, Ilagan will be hoping to make amends this time around. His aspirations were scuppered by a rampant Vincent van der Voort last December.

“I try to learn from every competition and believe that for every win or every loss I gain something,” he said. “Last year though I thought I played fairly well, my excitement altered my usual pace.”

It will be Spanish number one, facing the Asian number one come Tuesday afternoon, with Cristo Reyes gracing centre stage alongside Ilagan.

“I aim to perform at my very best, no matter who I face, as we both have three darts in hand,” concluded the former Malaysian, Philippines and Hong Kong Open champion.

“Utmost is to make my family, my main sponsors One80 and TERO Flights, my backers Darts Organization Tacloban (DOT) and Player One Philippines (TOP), my supportive friends from all over and my country the Philippines proud! It is to them I owe so much, enabling my presence in this year’s PDC World Championship.”