HomeBDOFrom Malguénac to the O2 Arena: How the vastly underrated Thibault Tricole has become the World Championship’s first Frenchman 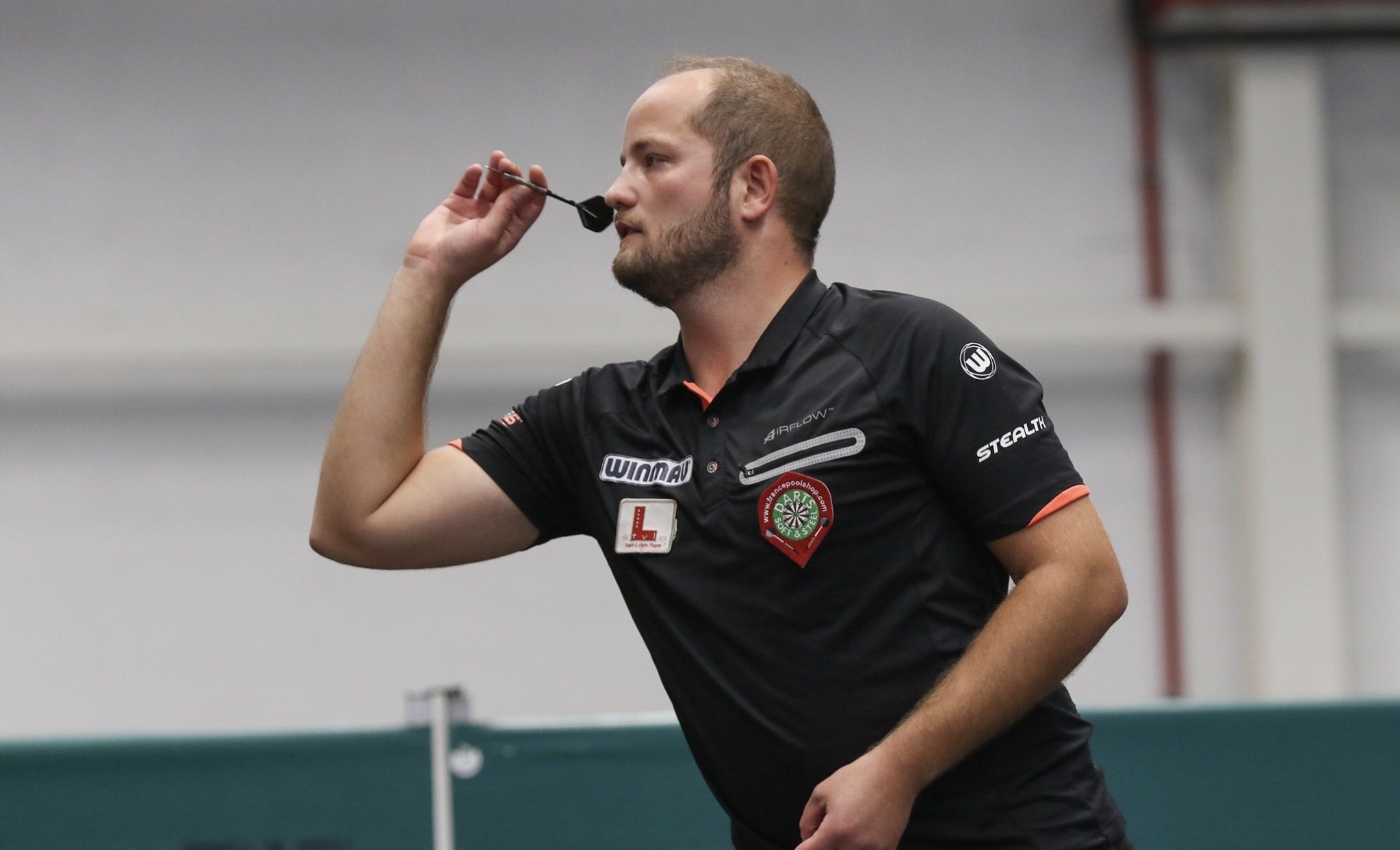 French presence is rarely detectable in darting terms. However this coming weekend as the BDO World Championship commences, Thibault Tricole will grace the O2 stage, creating history in doing so.

Having already staked a claim of arguably being the greatest ever player to come out of France, Tricole has lifted titles in both Greece and Spain in the dream twelve-month period, whilst coming through the Western European rankings in order to make his debut.

Whilst watching the tournament on television as a youngster, it has been a lifelong aspiration of the Malguénac-based thrower to play at the World Championship – and one that will be fulfilled on Saturday evening.

“Competing in the BDO World Championship was a dream when I was younger,” alluded the Frenchman. “I remember the beautiful evenings I spent in front of my television with my father, stars in my eyes.

“Then, it became a goal over time, especially this year when mid-season I found myself well placed in the Western European ranking. This year, I think I have done as many BDO tournaments as during the rest of my career.

“In June, I launched a crowdfunding campaign that worked very well to help me finish the season.

“I would’ve liked to have played at the Lakeside for the historical past, but playing at the famous O2 Arena also excites me.”

Tricole will take on the resurgent Ross Montgomery on Saturday in London, with the Scotsman having lifted both the Czech Open and Italian Grand Masters in November.

“There are no easy draws,” Tricole stated, “I know it will be hard. Ross is an experienced player who has shown he is in good form lately.

“It’s going to be hard, but not impossible. I’m not going to be the favourite but I trust myself. I imagined maybe an easier draw for a first round match, but at the World Championships, no match is easy.

“I’m going to the tournament with the desire to win. We’ll see how it goes.”

The Frenchman will abruptly become the from his country to appear in the BDO World Championship, creating a course of history and one that will live with him as his country continues to make strides to succeed in the darting world.

“It’s a personal pride but I don’t think about it much,” he said. “It was time for a Frenchman to participate. I felt in recent years the hope that many French people put in me. And I hope to give the envy to other Frenchmen to participate in the circuit in the hope of qualifying.”

Tricole has this year stepped on unchartered territory for a French darter. He’s lifted two BDO ranking titles in Greece and Spain, as well as reaching an additional two finals in Italy, Greece and Malta.

His maiden BDO title arrived in March of last year at the Torremolinos Open, after he defeated Kay Smeets of the Netherlands in the final.

Tricole’s triumphant campaign in Spain led to him embarking on a voyage to Greece – where he continued his unbeaten run, winning the Greek Open in Acropolis.

“Winning the Torremolinos Open was the trigger for this great season,” Tricole declared. “When I won in Spain, I said to myself that I can in fact do it.

“I was then full of confidence, I had not planned to go to Greece, but it was after my victory in Spain that I registered at the last moment.

“Confidence being there, I won my second BDO tournament in the wake. Note that I lost my first final on Sunday against Tomasetti, so it was not easy to recover, especially against Sebastian Steyer.

“Every weekend that I travel, I go there thinking that it will give me experience so I do not put too much pressure on myself, though, I did not enjoy losing four BDO finals this year,” he laughed.

A large French contingent have taken over the Facebook stream to support their number one! #BDO

One of those four final hurdle defeats that Tricole alluded to came in Italy – where the final BDO-ranked tournament before the showpiece event in London materialised.

He said: “After a good game against Nick Kenny in the semi-finals, winning in a deciding leg, I let myself be overwhelmed by the emotions of facing Tony in the final. Tony, with whom I played several times in doubles, and had a great time.

“As a result, I clearly missed a lot during the final. I will remember the games I won before the defeat, with my confidence remaining intact.”

Tricole’s confidence was also added upon thanks to his televised debut being constructed at the famous Circus Tavern in October, with the World Masters taking place.

“The morning of the last 32, I was rather confident, but as the match arrived, I felt the pressure increase,” the 31-year-old added.

“I have a lot of trouble managing pre-match emotions. I spent my time answering the phone with messages of support.

“I have not managed to isolate myself for good either. I was a little stressed. It took me a while to get into the game. But I’m happy to have lived this moment before the World Championships, it gives me extra experience.”

Experience was gained in favour of the Frenchman, though, the major tournament itself was overshadowed by controversy.

“At the World Masters, the redraw affected me. I was due to play Scott Waites initially in the first round so I will not complain,” laughed Tricole.

“In all seriousness, I was a little disappointed because I discovered my first major appearance [in 2010] at the occasion of the World Masters. It lacked professionalism.

“I feel that leaders want to compete with the PDC. Of course, the PDC have now taken a good step ahead. It may have to be modernised, but when I see for example the price of seats at the O2 Arena, I’m slightly disappointed.”

Following the conclusion of the BDO World Championships in London, many players worldwide will head to either Wigan or Hildesheim, Germany, with the ultimate vision being to turn professional.

Tricole will be amongst a probable small amount of Frenchman in attendance, with the 31-year-old being the most appropriate to succeed his country’s desires.

“It’s the potential opportunity to live from this sport,” the Frenchman confirmed. “In January 2019, I tried for the experience and casually, it gave me confidence for this year.

“By losing two days in the first round 5-4, I still managed to finish 24th in the final standings. After defeating [Darius] Labanauskas, [Boris] Koltsov and others.

“I know that this year will be peculiar because many players will try the experience. Me, I go back there. I know I’m not the best, but we’ll see how it goes.”

When did darts become a thing? Was it always a thing? Does it just not exist in France? #dartsdartsdarts

Other than Jacques Labre and Lionel Maranhao making a rather brief appearance in the 2014 PDC World Cup of Darts, as previously mentioned France has remained relatively undetectable in darting terms.

However, thanks to the results of Tricole throughout the duration of 2019, conversations surrounding the sport have been sparked in the country.

“The federation has existed since 1974, It peaked in the 2000s,” Tricole articulated. “Then, the number of licensees dropped, to reach a stable level in recent years.

“With 1,200 players currently playing, it is unfortunately little compared to the size of the country.

“The darts is therefore far from being anchored in the culture of French sports, but my results this year make people talk a bit about darts in France.

“The arrival of electronic darts has done a lot of damage to traditional darts in France. There are almost ten times more players in the soft-tip side.

“I myself play soft-tip from time to time but the pleasure is not the same. I started in steel-tip and I love it.

“It’s complicated in France but I hope that one day France will become a great nation of darts. When I see the evolution of the Netherlands and Germany, it’s a dream.”

Thibault Tricole will make his BDO World Championship debut on Saturday evening, taking on Scotland’s Ross Montgomery in the first round.