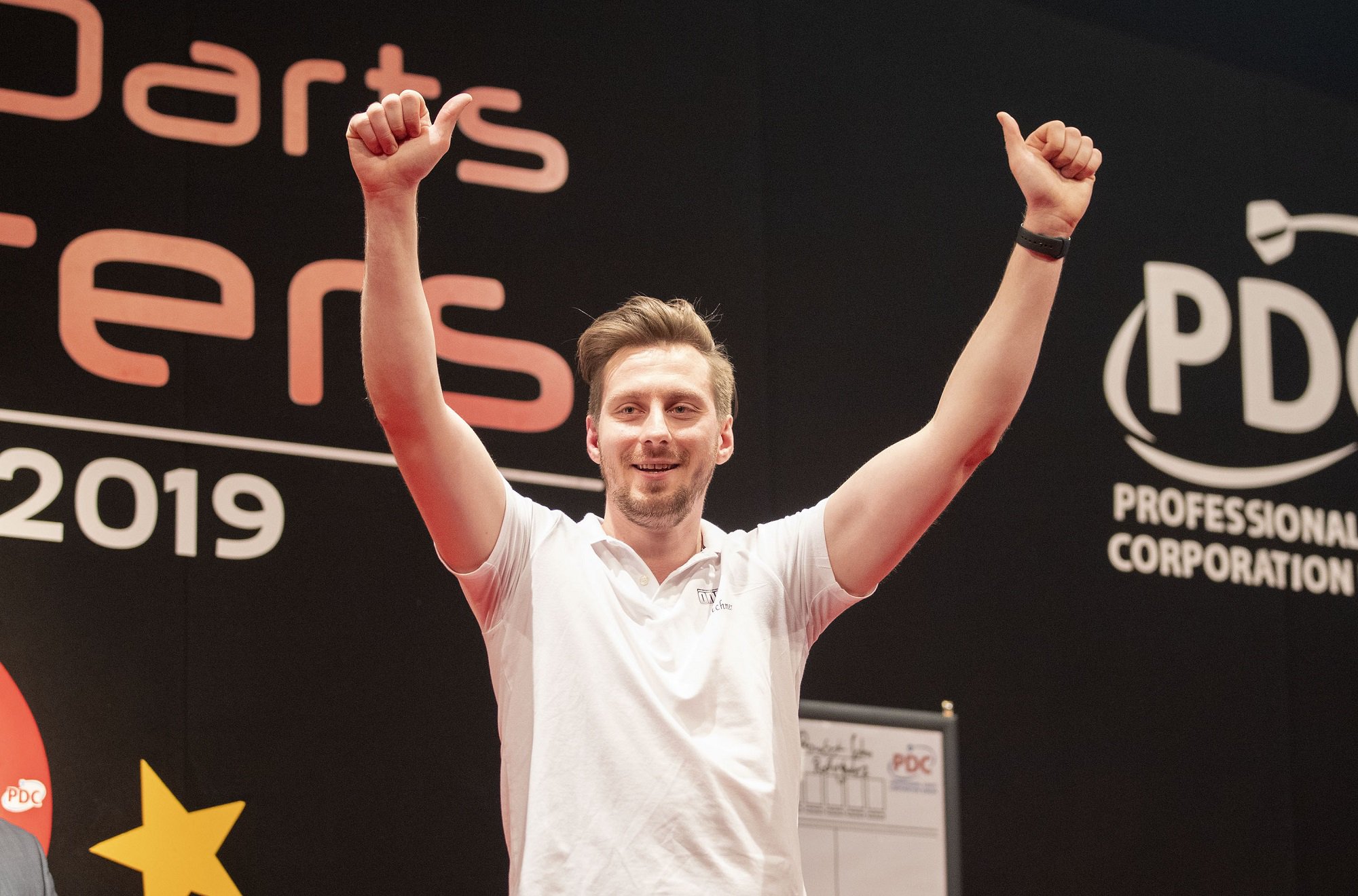 There is something quite refreshing about a sportsman becoming accomplished in two chosen fields. Having spent the majority of his childhood between two posts on a handball court, Florian Hempel is aspiring to accompany the world’s finest darters.

Surrounded by the renowned red and white painted posts that form the goal in the sport of handball, Hempel would act as the pinnacle of the defence at his local club during his youth.

The now Cologne-based ace competed for a decade as the shot-shopper for Dessau-Rosslauer HV in the 2. Handball-Bundesliga – the same club that the current German international handball coach abided within during his playing days.

“I started playing handball in 1997 – when I was a kid,” he said. “In 2007, I got contract at my local club, Dessau – who played in the second Handball Bundesliga in Germany.

“When I made my PDC debut in Zwolle, the commentator Paul Nicholson, a really nice person and sportsman said, ‘this young man was a good handball player so he must be good at throwing things’.

“What he didn’t know is, I played the position of goalkeeper. I don’t know what being good at catching has to do with throwing darts,” he laughed.

“I ceased my career four years ago,” Hempel added. “I had the feeling of moving on in life. I had too many typical handball injuries over all the years – which I simply didn’t want to take anymore.

“When I moved to Cologne, I was sharing an apartment with some other students to simply save some money. One of my mates there put a dartboard on the wall, and that was where things started.

“I played a few times, but not regularly and yet just for fun, until I noticed that I was better than others.”

Whilst only relatively recently taking up the sport of darts, having competed against his friends in an apartment in Cologne, Hempel has emerged as one of Germany’s brightest hopes in a country packed to rafters with talent.

His rise into prominence has been somewhat surprising to follow as he’s progressed from a German hopeful competing at the many Host Nation Qualifiers in the midst of the European Tour.

“Some might think that there’s a lot of luck involved, but in fact it’s nothing more than hard work,” explained the 29-year-old. “One could say, the more I train, the luckier I get.

“When I started to play darts, I did train every day like a maniac – eight to ten hours or sometimes even more! By doing so, I noticed that my training had a direct effect on the levels of my performance – which made me do so even more.

“I got better and better really quickly, also meeting the right people along the way – who’ve made it possible for me to focus on my darts.”

He added: “Every weekend I travelled to tournaments in Germany and the Netherlands. I won a lot and I eventually lost a lot, but I always stand up and analysed how to become better.

“However it was very clear to me that I want exactly the same as what all the big boys already have – a name and a place in this sport.

“Until today, I train a lot, but things are starting to change a little. For example, I go swimming two-three times a week, and I visit my physio two-three time a week also.”

Hempel will be amongst the 332 competitors at European Qualifying School at Halle 39 in Hildesheim, often alluded to as the home of German darts following the darting overhaul within the country in recent years.

An unassailable amount of German hopefuls will take up the task of potentially earning a coveted PDC tour card, with Hempel believing the difference between winning and not winning at Q School is quite considerable.

“In this moment in time, Q School is the most important tournament,” he said. “The difference of being a tour card holder or not is huge.

“It’s not only because of the chance of winning decent money from the game, but especially due to the chance of playing with the best players in the world.

“It would give my darts career a huge boost. That’s what I believe. Last year, I was really close in achieving this goal. This year, I can definitely do this.”

Hempel underwent an illness-struck debut at Q School two years ago. It is the most gruelling, intense grind on the darting calendar and one that is almost impossible to be successful within whilst feeling under the weather.

Nevertheless, the German’s most recent appearance was a rather significantly more pleasing one. Maik Kuivenhoven, Pavel Jirkal, Erik Hol and Sebastian Steyer did for him across the weekend, with two of whom being narrowly denied one of the golden tickets on offer and another reigning victorious.

“During my first year at Q School, I was only playing darts for a few months,” said Hempel. “I went there together with a few more players from my management team, and I wasn’t sure what to expect.

“Everything was new and impressive to me. Unfortunately, I was suffering with a cold which didn’t really help. I played bad, but all in all it was a good experience because at the first time I was able to play some really good players.”

He added: “Last year, after thousands and thousands of practice darts, the situation was totally different. I was a different player with more experience and arrived with a good feeling.

“Hard training throughout the year allowed me to win a lot of decent tournaments in Germany and the Netherlands – where I also beat many tour card holders.

“It made me feel good. As a result, I was confident and I was really playing good. I missed out on a tour card by just a few points.”

Hundreds of buoyant throwers will grace the Hildesheim setting, with just eleven ProTour places up for grabs. Many will walk away from Halle 39 with utter disappointment. Hempel remains positive, despite managing to weigh up his options if he was to reign unsuccessful.

“[Falling short of winning a PDC tour card] is really not on my mind at the moment, and I don’t spend time with such thinkings,” he stated.

“Of course life would go on and besides there are options like playing the Challenge Tour again. I never give up and my focus is 100 per cent on winning a tour card. I’ve got no time for anything else.”

The BDO-ranked German Open semi-finalist defeated his countryman Marvin Wehder in May to seal his European Tour debut at the Dutch Darts Masters after attempting to qualify via events in Germany for over two years.

A 103 average was recorded in the midst of a scintillating showing from Hempel during the qualifiers, held at the very same venue he’ll take to on Thursday as Q School beckons.

“Qualifying for the Dutch Masters after so many times of trying was the biggest success in my career so far,” said Hempel. “It was simply amazing and I enjoyed every second in the professional atmosphere.

“Not only the venue was great, but also the hotel and the many top class players I met and spoke to there. I really felt, yes, this is what I want but I also realised that I was in the middle of a shark tank, waiting to be fed to the big boys.

“The night before I slept really good and I felt ready for whatever might come. My debut was against Ryan Harrington – which I did win surprisingly 6-0.

“It was unbelievable, it was something that I can be proud about for my entire life. Leaving the stage and going back to the players lounge was like walking on cloud nine.

“All these great players in the lounge stood up to congratulate me on my success. Moments like these, I will never forget!”

He continued: “I knew that I would be playing Simon Whitlock the next day so we tried not to party too hard which wasn’t easy as the hotel bar was really attractive and full with players like [Michael] van Gerwen and others.

“The morning came when Max Hopp decided to sit down on our lunch table and have a chat. Max gave me some really helpful advice for my darts in general. With the experience of day one on my back, we went to the venue. I was in a good mood, having won the bull against Simon.

“Not too bad, I thought, but with Simon’s first throw being a 180, I knew this would be a tough match. I played well and I had my chances, but lost 6-3. He was simply the better player and I have much respect for him.”

During his aforementioned career within the professional ranks of handball in his native Germany, Hempel would compete in front of hundreds – sometimes thousands – of boisterous spectators.

The 29-year-old explains that his previous pastime provided him with the ability of playing in front of thousands of onlookers, as well as coping with other aspects which surround both his chosen sports.

“I learned very early on what I means to be playing in front of thousands of people,” Hempel proclaimed. “I even learned that you are not loved by everyone and that you eventually get booed.

“Handball did really help me to deal with this aspect and in many other ways, like for example handling the media and supporters. I simply love to be on stage – it’s what I live for.”