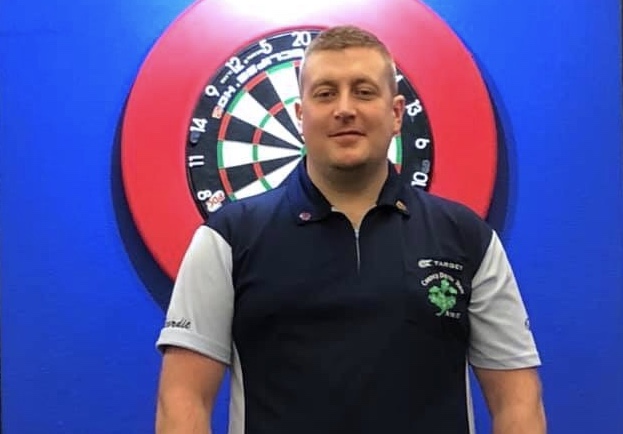 Gavin Carlin: ‘I hadn’t even heard of Q School until about a year ago’

For the aspirant professional player, Qualifying School is very much the place where dreams come true. A gruelling, intense four-day long event that sees just 30 players walk away victorious; one of those being Northern Ireland’s Gavin Carlin.

Carlin will be an unknown to many regular viewers, and even the hardcore darts fan, but produced some remarkable displays during his time at Wigan’s Robin Park Leisure Centre, where he claimed his coveted two-year tour card last month.

The Northern Irishman really did cause a huge upset, and when asked how he got into the sport, he simply said: “I don’t know, really. I suppose I played a little at youth club and was then asked to play for my local bar Macons a few years later, and it went from there.”

Prior to attempting to play his trade within the professional circuit, Carlin appeared at both the Six Nations and the WDF Europe Cup with Northern Ireland. “At the start of each season it’s everyone’s target to qualify for the Northern Ireland team,” added Carlin. “I was over the moon to get the phone call; two great experiences I’ll never forget.”

Following that once in a lifetime opportunity, he didn’t get off the to the best of starts at Wigan’s Qualifying School; two second round exits with averages below 85 left the 35-year-old with an abundance of work to do in the remaining two days.

But – from there – his fortunes transformed. After managing just two wins in the opening two days, Carlin gained scalps over the likes of Andy Hamilton, Colin Osbourne and Andrew Gilding en route to the semi-finals – where he was agonisingly denied an automatic tour card by the illustrious Matt Clark.

Carlin did enough on the final day of proceedings in reaching the last eight to wrap up his tour card success, and earn a place amongst the darting elite, as well as a spot at the upcoming Ladbrokes UK Open.

“It’s hard to describe the feeling,” said Carlin, after securing his two-year tour card. “Two weeks have past and I’m getting ready to go to my first event and it still hasn’t sunk in yet.

“It wasn’t always in the pipeline, I hadn’t even heard of Q School until about a year ago when a few mates told me I should give it a go, and it wasn’t until I won the Weigh Inn Irish Open that I made my mind up that I was going.”

Carlin will now be competing among the cream of the darting scene for a minimum of two years following his success in Wigan – where he’ll return on Saturday in order to partake in his maiden Pro Tour event – and said ahead of his campaign: “I’m nervous and excited at the same time. It’s every dart players dream to be playing on the same stage as the best players in the world.”

Carlin might not be in the position he is today without the dedicated support of his instrumental management team GM Darts – who also manage former World Championship qualifier Peter Hudson.

“A mutual friend did me a favour and introduced me to Greg and his team who had been following my progress for some time,” stated Carlin. They already had confidence in me and my ability before I had even played at Q School, which I appreciated, but I actually signed with them a few months before it was announced.”

It will be tough for the Weigh Inn Irish Open champion, with this year’s tenacious field being strongest to date, but he simply stated that his aim is to “win as many games as possible and hopefully go into the second year a better, more confident player.”