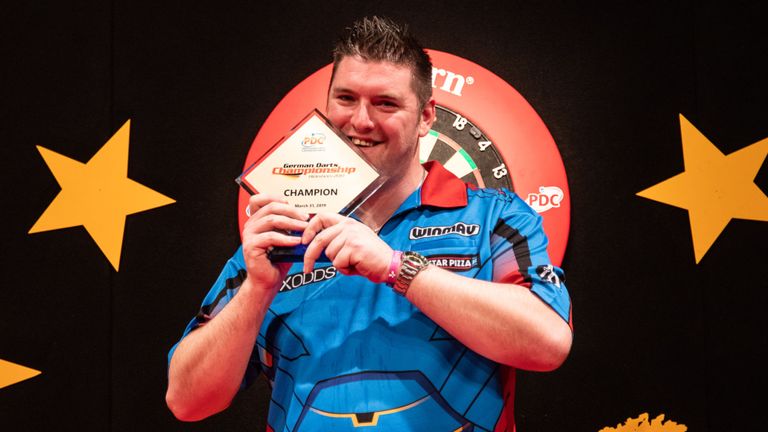 Daryl Gurney lifted his maiden European Tour title following a narrow victory over Ricky Evans at the German Darts Championship in Hildesheim, on a day that saw James Wade nail the nine-darter.

Gurney had three titles prior to his success in Germany, but added to his tally, meaning he soared to number three in the world topping both Gary Anderson and Peter Wright.

‘Superchin’ romped a in-form Andy Boulton 6-1 in his opening round match, before handing former World Champion, Rob Cross, a heavy blow and then edging out another former champion of the world in Stephen Bunting 6-5 in the quarter-finals.

Gurney faced a tough tussle with Adrian Lewis in the semi-finals, and, despite him opening up a 6-2 lead, Lewis battled back. Legs of 10, 15 and 17 darts put the two-time World Champion back into contention, only for the Northern Irishman to pull off a terrific 13-dart leg to prevail to the final.

Similar to his semi-final against ‘Jackpot’, Gurney raced out of the gates, and led 5-1 in a one-sided commencing, however, was pegged back by a resurgent ‘Rapid Ricky’, as the Kettering ace won five out of the following six to regain contention.

World Grand Prix and Players Championship Finals winner, Gurney, closed out the win, however, with finishes of a 46 and 96, before dropping to the ground in disbelief.

“It’s amazing for me to win this title,” explained a visibly emotional Gurney.

“Congratulations to Ricky on his run. He is a phenomenal player and is so fast he makes me look slow.

“My best friend, the person who got me back into darts, passed away a few years ago and I dedicate all of my success to him.”

It was a relentless run once again for ‘Rapid’ Ricky Evans, who made his second European Tour final in the space of a year thanks to wins over Robert Thornton, Mensur Suljovic, Mervyn King, Darren Webster and Keegan Brown, before losing out to a defiant ‘Superchin’ in the final.

Keegan Brown and Adrian Lewis both enjoyed runs to the semi-finals, and it was Brown who dumped defending champion, Michael van Gerwen, out of the tournament in tantalising fashion. The 26-year-old averaged 104.12 and hit 100% of his attempts at the outer ring in an emphatic performance in defying the world number one.

James Wade completed the second nine-dart leg of this year’s European Tour as he pulled off the traditional back-to-back maximums, followed by a 141 checkout on double 12 to send the Hildesheim crowd into overdrive.

The European Tour will resume from April 20-22 as Michael van Gerwen looks to defend his German Darts Grand Prix crown in Saarbrucken.

Success for Malicdem and Ilagan in Tacloban