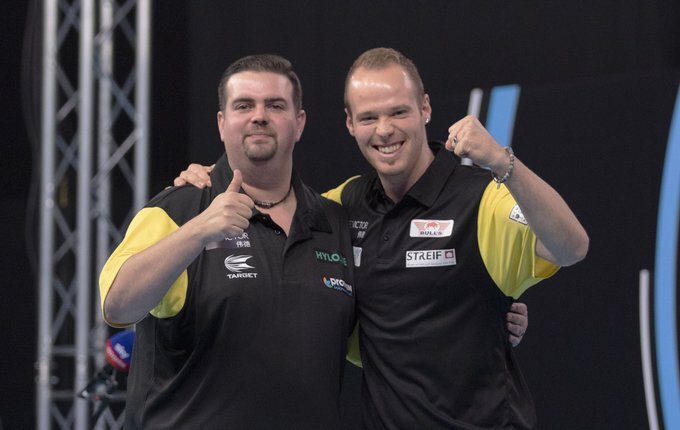 Belgium, England, Wales and Germany all came through doubles deciders on a thrilling afternoon of quarter-final action at the World Cup of Darts in Salzburg.

The day began with the news that Michael van Gerwen was in hospital after the recurrence of an ongoing back problem, but he got it sorted in time to join Danny Noppert for the Netherlands’ quarter-final with Germany.

‘Noppie’ went in first against Gabriel Clemens, and a 156 checkout helped ‘The German Giant’ seal a narrow 4-3 win.

There weren’t too many problems for Van Gerwen as he saw off Max Hopp 4-1 to send it to the pairs, which Germany won in a deciding leg to reach their first ever World Cup semi-final.

They will play Wales in Sunday evening’s semi-finals, who beat Australia after a thrilling trio of matches.

It began with an incredible game between Gerwyn Price and Simon Whitlock, in which ‘The Wizard’ hit 13 perfect darts as part of a blistering spell which saw him average over 104 for the match, but ‘The Iceman’ wasn’t far behind and nicked it 4-3.

It was another high-quality contest in the second rubber, a 4-2 win for Damon Heta over Jonny Clayton with an average of 102 to take it to the doubles.

Wales continued their excellent form in the pairs format so far this weekend to win the decider 4-2.

The English team also made it to the last four after surviving a big scare against Austria.

Mensur Suljović reeled off four incredible legs to come from 3-0 down against Michael Smith and win 4-3.

It looked as though there would be no need for doubles when Rowby-John Rodriguez led Rob Cross 3-1, but the former world champion stole the tie to set up a deciding match.

It was a scrappy affair, with England’s superior scoring giving them plenty of opportunities. They just about got over the line to secure a semi-final clash with Belgium, who beat Canada.

Kim Huybrechts and Dimitri Van den Bergh had very differing fortunes in their singles rubbers as ‘The Hurricane’ averaged 108 to see off Jeff Smith, but ‘The Dream Maker’ came up against another excellent performance from Matt Campbell.

No one really played to their top level in the pairs, but Belgium got it done 4-2 to continue their quest to lift the World Cup for the first time.

The semi-finals commence at 6pm UK time at the Salzburgarena.