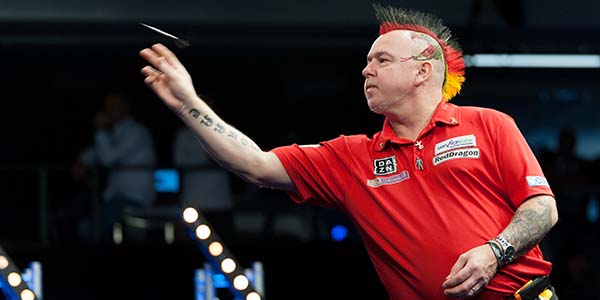 Gelsenkirchen will host a one-day spectacular this Friday as the World Series of Darts returns and Peter Wright defends his German Darts Masters crown.

The Veltins Arena, which is the home of German top-flight football team Schalke 04, will be transformed into a ‘Darts Music Arena’ for the one-day spectacular. A record-breaking 20,000 fans are expected to pack inside the venue on Friday afternoon in Gelsenkirchen, which will be a significant amount more than Berlin’s total of 12,000 at the Mercedes-Benz Arena during the Unibet Premier League campaign.

Three debutants will be introduced to the World Series scene as Jamie Lewis, Dimitri Van den Bergh and Rob Cross will feature in a World Series sanctioned event for the first time.

Cross, who lifted the World Championship crown in January, will open his World Series extravaganza against Stefan Stoyke – who will be a known player to European Tour viewers. ‘Voltage’ will appear at all six of the events this year and will play at massive cities such as Brisbane – who will host a World Series event for a first time.

Jamie Lewis was mainly selected for this year’s World Series event in Germany based on his run at the World Championship – where the Welshman reached the semi-finals after coming through the PDPA qualifiers held in Barnsley a month before the event. Lewis, who is nicknamed ‘Fireball’, will take to the stage on Friday afternoon as he takes on Nico Kurtz.

“It’s going to be an incredible experience playing in front of such a huge crowd,” said Lewis, who hit a nine-dart finish at Players Championship Three in March.

“When I started playing darts I never could’ve imagined that I’d be playing in a big football stadium.
“If I play like I know I can then there’s no reason why I can’t win it, I showed at the Worlds I can beat anyone on my day.

“I just need to find some consistency and if I turn up and play my best game on Friday then I can walk out of there with the trophy.”

“I’m really looking forward to playing on TV again, I love playing on the biggest stages and hopefully I can play like I did at the Worlds,” added Lewis, when talking to PDC reporter Josh Phillips.

“I think I strive on pressure.

“I tend to do a lot better on the big stage than I do on the floor so I think playing in front of such a huge crowd will help my game.”

“I am fully focussed on winning my opening game,” said Lewis.

“Hopefully my big stage experience could help me if it’s a tight game, I’m sure he will have the crowd behind him but I won’t let that affect me.”

Dimitri Van den Bergh, the World Youth Champion, will be the third thrower to endure his World Series debut this Friday in Gelsenkirchen. Van den Bergh will participate in a first round thriller as he takes on Martin Schindler – who reached a ProTour quarter-final a few weeks ago, whitewashing Rob Cross 6-0 en route.

Peter Wright will defend his German Darts Masters crown this Friday after lifting the title last October when the event was held in Düsseldorf. ‘Snakebite’ beat Phil Taylor in the final as ‘The Power’ took part in a World Series event for a final time.

“I’ll be ready for this one and it should be fantastic,” said Wright, who will feature in all six World Series events this year.

“It was the first World Series title I won – but I could have gone out in the first round.

“Dragutin had darts to beat me but I got through it and went all the way, which I will be hoping to do again.”

“I can’t wait to get back to Germany, I’m really excited for it,” Wright added.

“It was a great tournament to win and it would be massive this year because of the huge crowd.

“The crowds are always behind me anyway but to think there will be 20,000 this week is phenomenal.”

Wright will begin his aim for regain the title on Friday afternoon as he takes on Dragutin Horvat, who Wright also faced in the first round of last year’s inaugural event, in front of a crowd of 20,000 at the Veltins Arena.

Michael Van Gerwen, who lifted the events in Las Vegas and Shanghai before winning the finals last year, will begin his campaign in Gelsenkirchen against Germany’s number one Max Hopp – who claimed his maiden title within the PDC last month at the German Darts Open in front of a 2,000 strong host nation crowd.

Hopp has competed on the World Series circuit twice before this event in his home nation as he competed in Las Vegas and Düsseldorf last year. Hopp suffered a shock first round exit to Canadian qualifier Dave Richardson before once again beating beaten in the opening round at the inaugural German Darts Masters this time to Gary Anderson.

Van Gerwen hasn’t had as much success on the World Series circuit as he has had on other tours such as the European Tour. Van Gerwen won just three of the eight events last year and just three of the seven events the previous year and this newly-launched event is one of the few events that the ‘Green Machine’ doesn’t have in his trophy cabinet – which is heard to be just a few shelves bigger than Tottenham Hotspur’s.

World Series regulars – Gary Anderson and Raymond Van Barneveld will return to action after the seven month break. Anderson lifted the Dubai and Perth Masters last year while ‘Barney’ reached the final in Perth. Van Barneveld will face another known thrower to European Tour viewers in Manfred Bilderl while Anderson will take on Gabriel Clemens in what will be a repeat of the Players Championship 11 final, which Anderson tracked back from 4-1 down to win snatch the £10,000 cheque.

The one-day spectacular in Germany will also see Mensur Suljovic take to the stage as he faces Croatian-born, now Germany-based Robert Marijanovic – who claimed his maiden PDC tour card at Qualifying School in January. Marijanovic took to Twitter ahead of the tournament to say, “Already 14,000 tickets sold for the German Darts Masters in Germany! This is going to be huge!”

The first round matches will split across two mini-sessions on Friday afternoon with the quarter-finals, semi-finals and final being played from 8pm local time. Session intervals will see music acts take to the stage at the Veltins Arena to complement the unique World Series of Darts tournament.