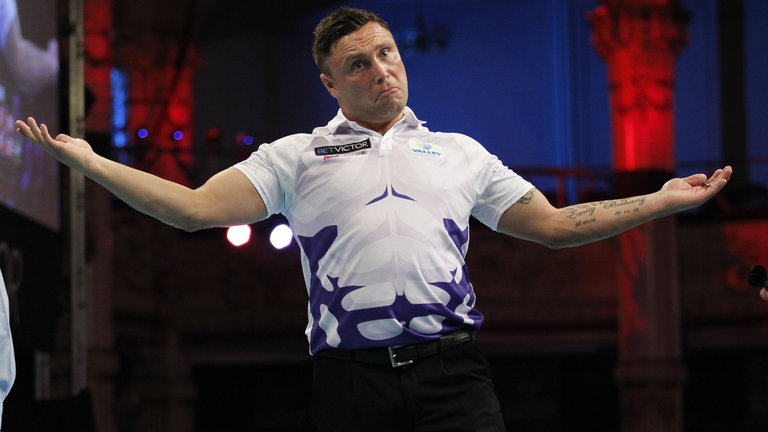 Where do we start with this one?

Well, I love Gerwyn Price. Not just because he is a Welshman and not just because he has come from practically nowhere to reach the top levels in this great sport, but because he has a passion for the game which darts needs. What makes darts interesting, very interesting, is not just seeing the darts land but the varied reactions of the players to their play. We love seeing a 180, however many times it happens, but soft applause and a faint smile would make this game like crown green bowling, and I for one think we need celebration not only in the audience but on the oche.

Gerwyn Price celebrates every maximum in the same way I would, like he hasn’t landed one for a year, and this to me is awesome to watch. Somebody up there loving his game and loving just being there with the big boys.

But what’s this I see? He is fed up of the game?

Everybody is entitled to an off day, week, month or even year, granted, and a pro sportsman is just as likely to let it get to him as a lad struggling to get into his pub first team.

But when millions of people are watching, thousands of whom spend hard earned cash to see the clash of titans on the oche, we do not need to hear that a player doesn’t care if he wins or loses. Football would stamp on this attitude, not even Lionel Messi would be an automatic pick if he started to say it is not interesting any more to be on the pitch living the dream.

I am not saying we stamp on Gerwyn Price, in fact if anybody in the PDC is reading this, I would plead with them not to take action. The lad is having a hard time and is not used to this. Add to this that other top players have let results get to them from time to time. RVB was interviewed after losing to MVG in the 2017 worlds and hinted at retiring because he felt he ‘wasn’t good enough any more’. It happens, we are all human. If your livelihood and reputation depend on success then failure, relatively speaking, hurts a lot more.

But if Gerwyn Price is reading this, I would urge him just as strongly to keep his gloom to himself. There are thousands of darts players who would give their non-throwing arm to be where he is, playing week in week out with the best players in the sport, in front of up to 12,000 passionate supporters, earning a decent living to boot. He is also still the top ranked Welshman so come the World Cup will be representing his country and playing alongside maybe Jamie Lewis or Mark Webster, neither of whom I expect will want to know that the results don’t matter to him.

I still love Gerwyn Price, I think we have to forgive him these tweets and all get on with loving darts. But by the same token, where we love the game we like to feel that those who make it so enjoyable feel the same way. I am no great darts player, I average 50, which is OK, but I know that I typically average 60 when my confidence is up and I enjoy a game.

What Price said is understandable, forgiveable, and hey, not even all that bad in the grand scheme of things. A couple of one-off throwaway tweets made in the heat of the moment. He never criticised the PDC, his opponents, or the game itself. But claiming not to care does nobody, least of all the man himself, any favours. Even those who are not really Gerwyn Price fans should let this go and get behind him so that he could, I say could, reverse the slide and get back into contention for the top half of the table.

The Snake has Lost its Venom