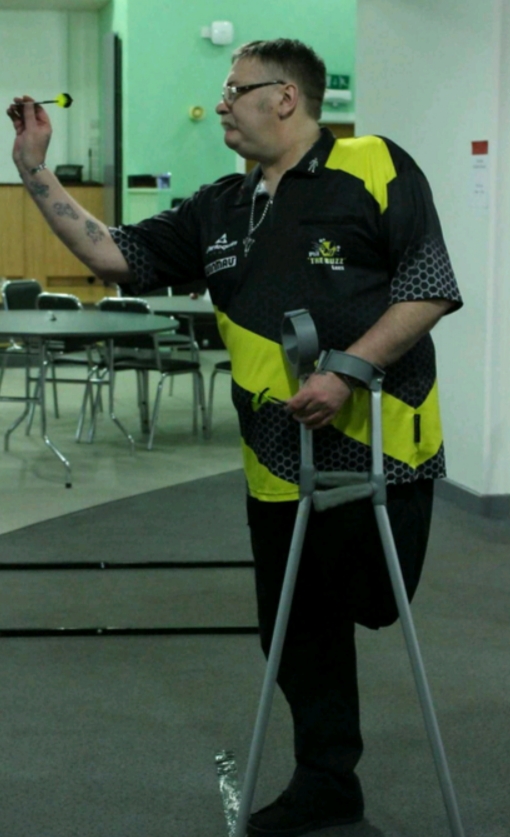 Tell us a little bit about yourself.

My name is Phil Lees, I’m 58 years old and I’m from Manchester.

What do you think Kwanghee Cho’s victory in the inaugural World Disability Darts Championships will do for the disability side of the game globally?

I’m not surprised that an Asian representative has come on the scene and cleared up at weekend. We saw the same in ladies last year with Mikuru Suzuki. Will his impact be the same? Who knows…

Although you fell in the last 32 to Shane Havard of Wales, what did it mean to go out and play in a World Championships in the Netherlands?

I’ve been involved in every WDDA Masters since 2014 but to get to the inaugural World Championships was a dream, as was playing in the Dutch Open.

You beat Harm Mellies and Serge van Belle before falling in the last 16 of the paradarts competition the following day against another Welshman, Michael Davies. Were you happier with how that tournament went from a results perspective?

I didn’t play my game against Shane in the Worlds but I played better in the paradarts. Reaching the last 16 was a positive, but there’s always room for more.

How important is Winmau’s support for the growth of the sport?

Winmau have been fantastic for the BDDA/WDDA and for me personally as well. Now with them signing MVG, it’s amazing to be part of the team.

How far do you think that disability darts can go in the next 5-10 years?

Things seem to be moving and changing fast in the disability darts world at the moment, so I’m convinced it’s going to be amazing in the future.

What are your plans for the year ahead?

I’m back on the BDDA tour this year, so I’m looking forward to that with the finals set to be played at the Circus tavern.

What was your route in to playing darts originally?

I played darts locally and a bit of Super League until my amputation. I got back into it in 2013 playing local league.

How did you get used to throwing with your crutches?

Balance has been, and will always be, a problem but I do what’s comfortable for me. Some days it’s good, some days it’s bad.

You played an influential role in setting up the Stockport Disability Darts League last year. How is that coming along?

I’ve been involved with Ben Wright this year helping him set up a very successful and rewarding disability league for Stockport and the surrounding area. This year can only get better with more members.

You are currently a Disability Darts Ambassador – what does that involve?

I also work with the UK university darts clubs as there are disability ambassadors helping young disabled students to get into the game.

How did you get your nickname ‘The Buzz’?

So, the name the Buzz…. Basically, I bought a black t-shirt with some yellow on it and my ex-captain just named me ‘The Buzz’ and it stuck from there.

Highlight of your career thus far?

Loads to mention but going on the Lakeside stage to get my 3rd place World Masters trophy is up there.

Who are your best friends in darts?

My mate on tour is Mikey Swindells. He always makes me laugh and he’s a good Manc lad like me.

Who has been your toughest opponent?

Ricky Chilton is my toughest opponent. He beat me in the 2014 final and I only got revenge in 2019.

Favourite darts player, past or present?

Who would you want to play you in a film of your life?

Oooh. Maybe Peter Kay? I like a good laugh.