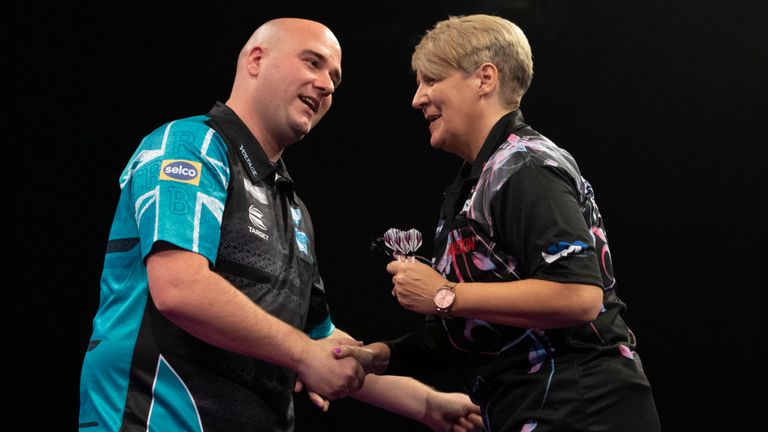 The first session of the BoyleSports Grand Slam of Darts got underway at the Aldersley Sports Village in Wolverhampton, and the favourites came to the fore.

Ashton started with a 177 and a 180 in the first two legs as she started brightly, trailing 3-2 after five legs. Eventually though the 2018 PDC World Champion took control to pick up the two points on offer.

Smith scored massively throughout, and missed double 15 for an incredible nine darter, eventually losing the leg. Despite missing 13 darts at doubles, Smith averaged 100, and took out 64 on tops to seal victory.

Ryan Harrington impressed on debut, defeating last weeks’ World Series of Darts runner up, Danny Noppert 5-4. All legs went with throw, and the son of the 1998 and 1999 World Matchplay Champion prevailed for a famous win.

Dave Chisnall was thankful for several missed doubles from Jamie Hughes, as he picked up a 5-3 win.

“Chizzy” took out 124 on the bull for the opening leg, before “Yozza” responded with a 121 on the bull for 1-1. The turning point came in the sixth leg, where Hughes squandered five darts to break for a 4-2 lead, and Chisnall didn’t look back, with 81 and 62 checkouts sealing the win.

Daryl Gurney didn’t need anywhere near his best to account for Richard Veenstra 5-0. The Dutchman looked nervy on debut, and the Irishman coasted home.

The same applied for UK Open Champion, Nathan Aspinall, as he whitewashed Martin Schindler in the opening match of the event.

Peter Wright again tinkered with his equipment, but had too much in the end for Wales’ Wayne Warren in a 5-2 win.

Gabriel Clemens romped to a 5-1 win against Brendan Dolan, sealing the match with a 121 checkout on the bull.

Hungary, Czech Republic and Belgium to be visited in most expansive European Tour to date