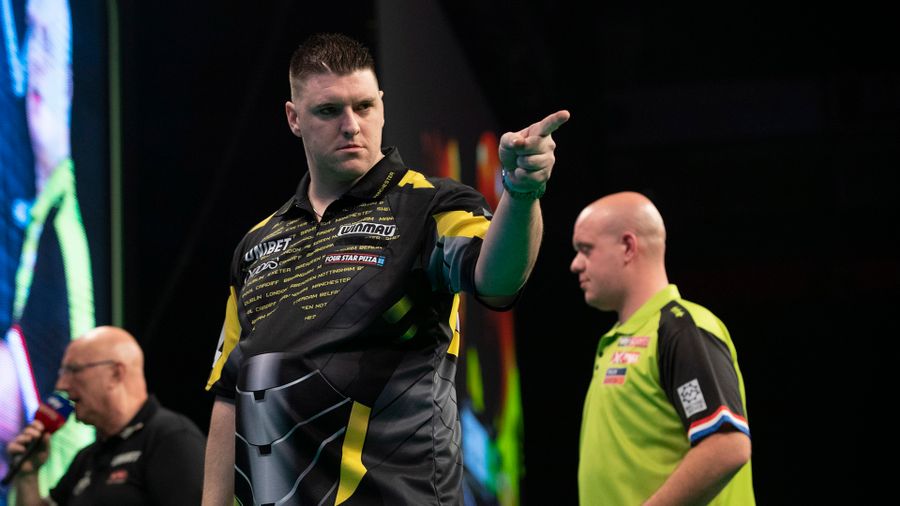 The scene was set as Premier League darts landed in Manchester. Michael van Gerwen and Rob Cross both sat in the controlling positions with three players – Wade, Price and Suljovic – on 15 points and Daryl Gurney on 14 points. Of those players it would be Wade and Price who sat in the play-off positions with Suljovic hoping to take advantage of an out of form Peter Wright and Gurney hoping he could once again defeat van Gerwen.

In true dramatic style Gurney would become only the second ever player to complete a Premier League double of the world champion with a very impressive 8-5 victory. The win boosted Gurney’s chances of reaching a play-off spot with just two league weeks remaining.

Michael van Gerwen did not appear to be playing at his best and so it would be down to Gurney to take advantage of the situation. It would be Gurney who would surge into a 4-0 lead, van Gerwen fought back with two legs but the Northern Irishman stepped up, even though the Dutchman looked determined to take out 130.

In the end Gurney was too strong and van Gerwen would lose the top spot in the Premier League, courtesy of the first match of the night involving Rob Cross and Michael Smith.

It was a commanding performance by Rob Cross who ‘sparked’ from the very first dart. His scoring was scintillating and finishing was clinical. Cross was taking out finishes of 78, 71 and 68 early on. Smith had no reply to this onslaught and it was not until he was 5-0 down that he was able to pick up the pace and peg a leg back. Cross was unmoved and hit back in the next leg with scores of 140, 140, 180 to leave 41 which he despatched with ease.

What was interesting to note throughout the match was how Smith was walking on his last dart before he had finished throwing. This was obviously upsetting his rhythm and as Wayne Mardle commented, he would need to address this before it got any worse.

Smith would fight back in the next leg, opening up with scores of 140, 125 and 140 to leave 96 but he missed a shot at the double. Where Cross had hit two 180s in the leg he was in a perfect position to pounce and moved ahead 7-1 to guarantee himself 19 points in the league, surely enough to see him through. Smith looked demoralised and in the last leg of the night Cross started off with a 180 and quickly brought his score down for a 44 finish. It would be an 8-1 win for Rob Cross and return to the top of the Premier League.

In what was a scrappy and nervy match, Mensur Suljovic would defeat Peter Wright to take himself into the play-off positions. The highlight of the match would be Suljovic’s 144 checkout in the first leg, but the game did not really live up to this opening and both players looked nervous at times and where there were glimpses of brilliance it was not a consistently fast paced, action packed match.

Wright again appeared to struggle, an unfortunate shadow of the player who all dart fans have come to love and admire. It would be the night where Wright would see his play-off chances end. Wright would again be averaging in the 80s, not enough in the Premier League to win matches and although there has been much said with regards to what darts he uses and a confidence thing, Peter Wright will surely bounce back from this.

James Wade and Gerwyn Price, both sitting in the play-offs before the night began, would face each other. The bookmakers had this down as a draw, but due to leg difference and the results of other matches Price knew he had to win this match to stay in that play-off place.

It would be ‘The Machine’ who would secure the win, beating Price 8-4. Wade quickly moved into a 3-0 lead, Price fought back but it would be Wade showing how clinical he is by checking out on 122, with a bullseye finish to go 6-3 into the lead.

Price was able to pull a leg back but Wade would run out the match winner in a very comfortable and professional manner.

The talking point of the match would be the refusal of Gerwyn Price to shake Wade’s hand at the end of the match.

“I swear on my baby boy’s life I did nothing wrong,” said Wade who was bemused as to why the Welshman would not want to shake his hand.

The next venue is Sheffield and with Cross and van Gerwen surging ahead at the top, there are four players fighting for the last two places. Wade and Suljovic sit in those two places at the moment, but you must not count out the impressive Gurney and the fight of Price.

THE AVERAGES FROM MANCHESTER

King at the Double whilst Kokiri claims a crown