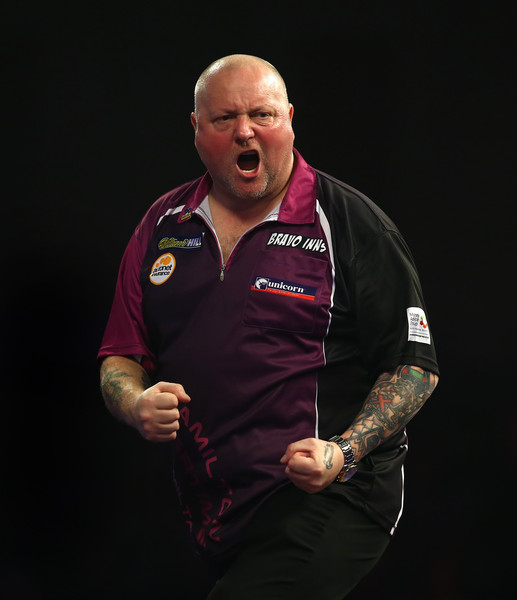 Andy Hamilton made his return to the big stage in style, coming from 3-0 down to see off Grand Slam quarter-finalist Michael Unterbuchner in a deciding leg as the 2018 Finder Darts Masters got underway at the Zuiderduin Hotel in the Netherlands.

On a night where most of the best performances came from the youth and women players, it was former PDC World finalist Hamilton who stole the show with a scrappy comeback win. Elsewhere, Irish youngster Keane Barry averaged over 92 in a whitewash win against Nathan Girvan, despite last year’s youth finalist being on a finish in all four legs.

In the women’s tournament, Fallon Sherrock and Lisa Ashton both secured 4-0 successes, the former averaging over 80 against relative unknown Astrid Trouwborst, with the latter seeing off another top female player in Sharon Prins with an average of over 87 ahead of her Alexandra Palace debut next week.

The tournament got underway with a couple of veterans – three-time Lakeside champion Martin Adams and Welshman Wayne Warren met in Group B with a combined age of 118, and it was Warren who came out on top 5-3 after a scrappy encounter. Another scrappy game came later on in the evening with Ross Montgomery edging past ‘Dutch Giant’ Martijn Kleermaker by the same scoreline in Group C.

16 year-old Jurjen van der Velde hit a 15-darter in the first youth game of the event, but it wasn’t enough to prevent a 4-2 defeat to Levy Frauenfelder, while Gary Robson squeezed past Scott Waites 5-3 in Group G. Local hero Wesley Harms hit a 126 checkout in his 5-1 thrashing of Dean Reynolds, and another Dutchman in Jeffrey Sparidaans got off to a winning start by whitewashing Jeffrey van Egdom, who is set to make his Lakeside debut in January.

A 125 checkout on the bull was insufficient for Daniel Day as he lost a deciding leg to Wouter Vaes, with the opener in Group H seeing a convincing 5-1 win for Conan Whitehead over Tony O’Shea.

Saturday sees the group phase completed with the seeded players playing Friday’s losers in the afternoon and then facing off against Friday’s winners in the evening with a few winner-takes-all clashes sure to be in store.