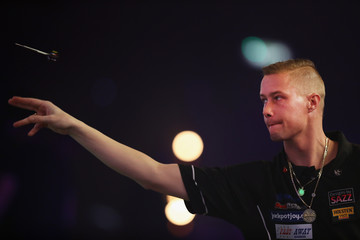 Wesley Harms and Michael Unterbuchner saved the BDO’s bacon at the Grand Slam of Darts with two contrasting performances to seal their place in the knockout stage at Aldersley Leisure Village as Raymond van Barneveld’s miserable week was finished off by a whitewash from Michael Smith.

After Glen Durrant, Scott Mitchell and Jim Williams were all desperately unlucky to be eliminated in Wolverhampton on Monday night and with Mark McGeeney also crashing out, a 104 average from Wesley Harms and a clinical display of finishing from World Trophy finalist Michael Unterbuchner kept the BDO bashers quiet for a while longer. Harms was involved in yet another cracking game in this year’s Grand Slam as he and Keegan Brown equalled the record for the most 180s hit in a group match in the event, which coincidentally was broken by Gerwyn Price and Glen Durrant on Sunday, showing the outrageous quality over the last few days.

However, after ‘The Needle’ missed a dart at double 12 to win, Harms stepped up to win the straight shoot-out for a place in the last 16, the ‘reward’ being a clash with Gary Anderson. Elsewhere in Group B, James Wade extended his unbeaten run to thirteen matches and ensured he topped the standings with a comfortable 5-1 win over Mark Webster and another ton-plus average.

In the same group as the reigning UK Open and World Matchplay champion, Gary Anderson, there was another one-off knockout match between Ian White and German star Michael Unterbuchner. After ‘The Flying Scotsman’ saw off Steve Hine 5-1, the Lakeside semi-finalist took advantage of some profligacy from ‘Diamond’ to seal a 5-3 success and a place in the second round on his debut appearance in the Grand Slam. For Ian White, it’s a third successive group stage exit in Wolverhampton and a fourth TV event in a row that he’s been knocked out in the early stages after winning on the Euro Tour in Maastricht.

Group A was wide open after Michael van Gerwen’s incredible loss to Jonny Clayton on Sunday night where the world number one was threatening a world record average for much of the match. The three-time reigning Grand Slam champion ensured he would qualify for the knockout phase, though, with a 5-1 success over Joe Murnan. Jonny Clayton then joined him in the top two of the group, seeing off Gary Robson 5-3. It was a familiar story for ‘Big Robbo’ as he started poorly but worked his way into the game and was unlucky in the end not to come away with the win. He would’ve needed an emphatic triumph to progress anyway, but there are positive signs for sure for the man from the northeast going into Lakeside in six weeks’ time.

The final group to be completed was arguably the tightest one with five-time World Champion Raymond van Barneveld in serious danger of elimination. In fact, he was lucky that he even had a chance of progression going into the final round of round robin fixtures after a dicey match-up with Adam Smith-Neale. The current World Master succumbed to a 5-1 defeat to the 2017 World Master Krzysztof Ratajski, which meant that ‘The Polish Eagle’ progressed to a round of 16 meeting with Jonny Clayton. Going into the tournament, nine different nationalities were set to be represented, and Ratajski’s progression meant that all nine would also be present in the knockout phase.

The final match of the group phase saw Raymond van Barneveld needing four legs to squeeze through, and a 5-3 win being enough for Michael Smith. As is becoming all too familiar, ‘Barney’ never got going and ‘Bullyboy’ eased to a whitewash victory, meaning the Dutchman was the victim of only the second 5-0 scoreline in this year’s Grand Slam. Smith progresses to a mouth-watering encounter with Michael van Gerwen on Thursday night, while RVB has to try and get himself up for the World Championship as he always seems to do. It appears a last 16 match-up with MVG is on the cards at Ally Pally, which could turn out to be Barneveld’s last hurrah unless he starts playing the Pro Tour again next year.

Wednesday in Wolverhampton sees the bottom half of the draw take centre stage once again with Mensur Suljović facing Rob Cross and Peter Wright taking on Simon Whitlock in two all-Premier League match-ups. Earlier in the night, Dimitri Van den Bergh plays Stephen Bunting in a repeat of their 2017-18 World Championship first round classic, and newly-married Gerwyn Price meets Josh Payne. If those games are as good as the last two nights have been, then we are in for a treat.