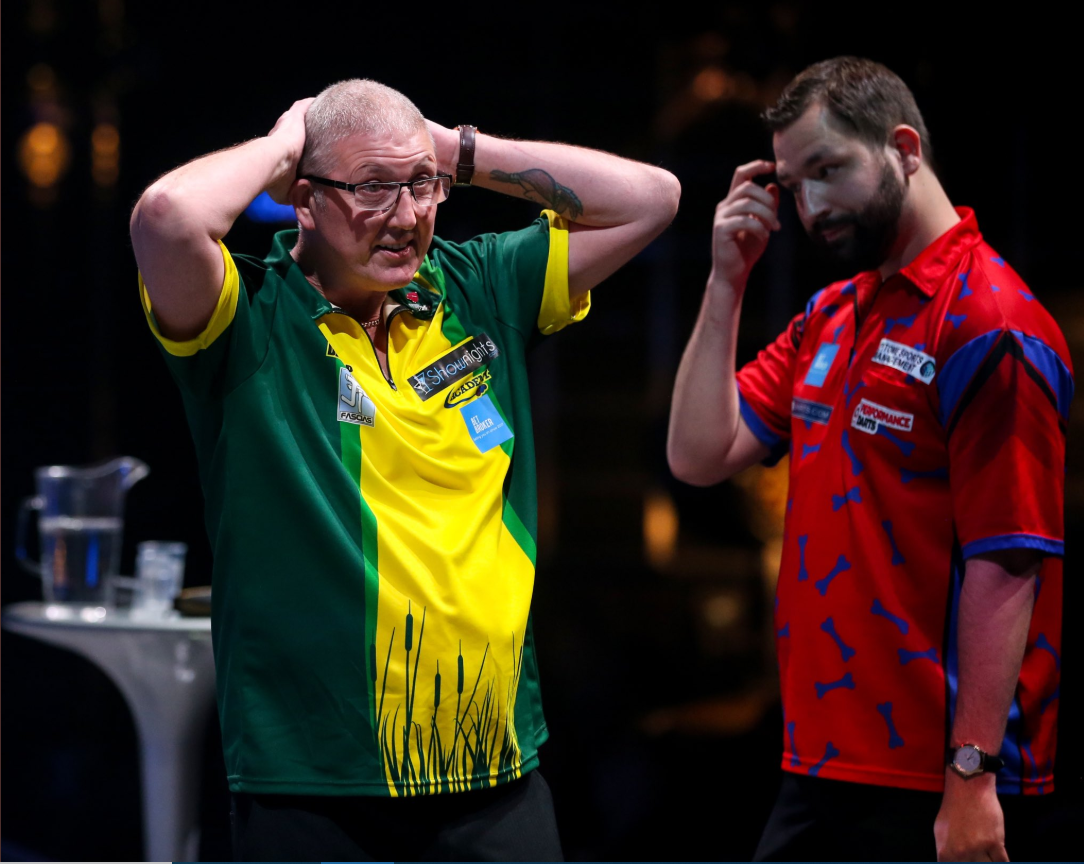 It was a good day for the favourites on day 3 of the 2020 BDO World Championship at Indigo at the O2 as former PDC world finalist Andy Hamilton recovered from a scrappy first set to progress alongside the likes of Scott Waites and Wesley Harms.

Elsewhere, Paul Hogan produced the highest average of the tournament so far, a 97.51 in a 3-0 win over Adam Smith-Neale to set up a tasty second-round meeting with Martijn Kleermaker. Hogan missed double 18 for a nine-darter during a blistering first set in which he averaged 115, and would have finished with a ton-plus average if it wasn’t for a series of missed doubles in the final leg.

Hamilton, who had the rare experience of having played at the O2 before albeit in the main arena, missed handfuls of darts at doubles in a poor first set that his opponent Darren Herewini eventually took 3-1 with both players averaging in the 60s.

From there we saw ‘The Hammer’ produce glimpses of the darts that saw him reach major finals in the PDC as he stormed to the second set in straight legs and kicked off the third with a 12-darter.

He ended up squeezing to a 3-2 success in that set before raising the standard even more in the set four, hitting two 15-darters and producing a maximum in the only leg he didn’t win.

The Stoke-on-Trent thrower has a tough assignment against Wayne Warren in the last 16. Warren’s fellow high seed, Wesley Harms, came through an excellent game with Swedish qualifier Andreas Harrysson.

Harrysson took the scalp of John O’Shea in the preliminary round and carried on where he left off against the top seed, averaging 100 in the opening set only for Harms to steal it with a 101 checkout.

The standard relented slightly from there, although the Swede managed to turn it around, sealing the third set with a 13-darter to lead 2-1. A much better fourth set from Harms sent it all the way, and after winning the first two legs of the decider, Harrysson continued the topsy-turvy nature of the game to take it to a tiebreaker.

A 12-darter handed Harms the advantage once more, and this time he converted it to move through to the last 16. Harrysson’s debut on the big stage surely won’t be his last appearance after his performances in London.

The aforementioned Paul Hogan was millimetres away from the first BDO World Championship nine-darter for 30 years as he went the treble 15 route on 141 and was agonisingly close to the 36.

It finished off a brilliant first set where he also took out 155 for a 12-darter. His opponent, Adam Smith-Neale failed to get a dart at a double in the first two sets as ‘Crocodile Dundee’ doubled his lead.

The former World Master improved massively in the third set, taking two straight legs to lead it 2-1, but after another 12-darter from Hogan, he eventually got over the line 3-2 in that set to set up a meeting with the similarly impressive Martijn Kleermaker.

In what was billed to be arguably the tie of the first round, Scott Waites and Martin Adams both struggled to find the form that saw them win a combined five BDO world titles.

‘Wolfie’ got off to a flyer, taking the first two legs in 29 darts but the match then turned into a very scrappy one, the pair missing 66 darts at doubles between them.

Adams took the first set 3-1, before Waites won the second in the same fashion, breaking throw in the first set and going on to take it by the same scoreline.

A 124 checkout from the three-time champion was a rare high moment in the third set, which ‘Scotty Too Hotty’ won 3-1.

Adams forced a deciding set, but it was the former Grand Slam champion Waites who found his doubles when he needed the most to reel off three straight legs and book a date with Harms, although he will almost certainly need to play better if he is to progress to a fifth consecutive quarter-final.

Reigning women’s champion Mikuru Suzuki was involved in by far the best ladies game of the week so far, semi-finalist last year Maria O’Brien taking the first set in straight legs only for the Japanese in respond in kind.

Suzuki kicked off the final set with a 14-darter and went on to win it 3-1 to preserve her unbeaten record in the BDO World Championship.

Someone with a very different record at these championships, David Cameron, suffered a 3-1 loss to two-time PDC Challenge Tour winner Nick Fullwell.

Fullwell averaged over 90 in an impressive display of scoring to progress to a first-round meeting with David Evans on Tuesday afternoon, where he will be hoping that legends of the game Terry Jenkins and Andy Smith will be supporting him once again.

Somerset’s Justin Hood was also impressive in Monday’s other preliminary round game, seeing off the first ever Romanian to play in a World Championship, Gabriel Pascaru, 3-1. Hood takes to the stage again on Tuesday, coming up against third seed Richard Veenstra.