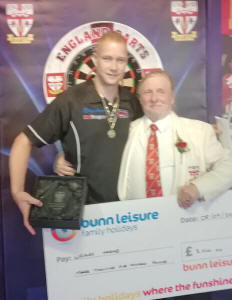 Wesley Harms, Scott Mitchell and Anastasia Dobromyslova were among the eight different tournament winners in a dramatic weekend at Bunn Leisure in Selsey.

Harms and Dobromyslova wrapped up the weekend’s proceedings by defending their England Classic titles on a day that saw 28 streamed games played and 12 tournaments completed.

‘Sparky’ booked his place in the semi-finals of the Classic by recording impressive wins on the Saturday against Mark Gallagher, Rob Collins, Jason Lovett and Mark Blandford. The Dutchman then beat Andy Hamilton 4-1 in a rematch of their meeting at the World Trophy last weekend to set up a quarter-final with Jason Askew, which Harms won 4-2.

In the semis Harms recorded an average of 82.74 in a 4-2 win over Wayne Warren, who made yet another ranking semi-final courtesy of wins over Lionel Webster, Cole Davey, Callum Francis, Matt Padgett, Simon Stainton and the Northern Ireland international Kyle McKinstry.

It was Warren’s management stablemate Nick Kenny who met the Dutchman in the final after recording a highly impressive 4-0 semi-final win over Craig Venman. Norfolk’s Venman had beaten Tony O’Shea, Martin Adams and former PDC Tour card holder Steve Hine on the Saturday to reach his first Cat A+ semi but he was blown away by Kenny, who landed a 170 checkout in the opening leg and finished with a 93.94 average.

Harms took out 116 in the opening leg of the final as he raced into an early 2-0 lead, only for the Welshman to hit back and level things up at 2-2 with a 16-darter. That was as good as it got for the recent Belgian and French Open winner though, as Harms won three legs on the spin to run out a 5-2 winner and secure yet another title in Selsey.

In the ladies Classic, Dobromyslova retained her title courtesy of a 5-2 win over Deta Hedman.

‘From Russia with Love’ had beaten Corrine Hammond, Margaret Sutton, Dee Bateman and Sarah Roberts on the Saturday and she continued her excellent form on the Sunday, beating Lisa Ashton 4-0 with a staggering 100.2 average.

Hedman had had a tougher route to the final, needing last leg deciders to beat both Leanne Topper and Beau Greaves, but she also recorded a whitewash in the semis as she blew past Lorraine Winstanley.

While Dobromyslova’s scoring dipped in the final, she had enough to beat the veteran with an 80.12 average for her third title of the year.

Earlier in the day, the Cheshire thrower had atoned for her defeat in last weekend’s World Trophy final by beating Lisa Ashton 5-3 to win the England Darts Ladies Matchplay.

Ashton did taste success in the other BDO ranking competition of the weekend though, beating young star Beau Greaves to win the ladies England Masters crown. Ashton beat Mandy Smith, Vicky Pruim, Suzanne Smith, Lyn Marsden and Bateman before her meeting with Greaves, which the ‘Lancashire Rose’ won 5-2 with an 80.38 average.

The men’s England Masters, a Category C competition, was won by Scott Mitchell. It was a first ranking title in 372 days for the England captain, who followed up wins over Andy Johnson, Lincolnshire Open winner Graham Usher, Venman, James Beeton and Harms with a 5-2 win over Richard Veenstra.

Mitchell had trailed 2-1 at one stage in the final but the former BDO World Champion rattled off four legs in a row to win the match and consign Veenstra to his second final defeat in less than a week after his loss in the World Trophy.

Much like Dobromyslova, Mitchell also did the double thanks to success in the Matchplay competition. The Dorset star recorded impressive wins over Harms and Jason Heaver to make the final but he needed to survive match darts to beat Daniel Day, who was a late replacement for Jim Williams, 5-4. Mitchell sealed the deal with a superb 105 checkout.

Although she was not as dominant as she has been in the recent BDO ladies competitions, Beau Greaves didn’t leave Selsey empty-handed. In fact, the Doncaster sensation left the south coast with three more titles for her ever-expanding trophy cabinet.

The first of those titles was the Girls Matchplay. Greaves was far from her best but she had enough to come from behind and edge out a scrappy game against County Durham’s Lauren Stokoe 3-2.

‘Beau N Arrow’ then picked up the two England Darts Youth Grand Prix titles in quick succession. She won the Girls event courtesy of a 3-0 triumph over Bedfordshire’s Alex Dorney, before she then went through the gears to beat Fred Box 5-3 to secure the mixed title.

In the Boys Matchplay, the title went to Charlie Manby. The Yorkshire youngster had beaten Nathan Potter, Mitchell McCarthy and Tavis Dudeney to make the final, where he met Tyne & Wear’s Jack Male. Manby raced into an early 3-0 lead and he then endured a spirited fightback from Male to finish a 4-3 victor.

The honours in the Disability Darts competitions were split between Andrew Quinn and Michael Callaghan. Quinn won the Classic title courtesy of a 3-0 win against Paul Hampton but ‘The Mighty’ couldn’t repeat the feat in the Masters final, losing 3-1 to Callaghan.

The weekend’s action had kicked off all the way back on Thursday, when Martin Adams won the Men’s Pentathlon for a 13th time.

Andy Hamilton, who was making his debut in the competition, was ahead after five events but most of the running was done by Kyle McKinstry, who still led with two events to go. However, ‘Wolfie’ was the one on the top step after the 24th and final event was completed, with McKinstry eight points back in second. Dave Parletti finished 3rd, while Hamilton and Scotland’s Jim McEwan finished tied for 4th position.

This weekender in Selsey marked the first events since Darts Planet TV and England Darts announced their new partnership and numerous players over the weekend were seen sporting the DPTV badge.