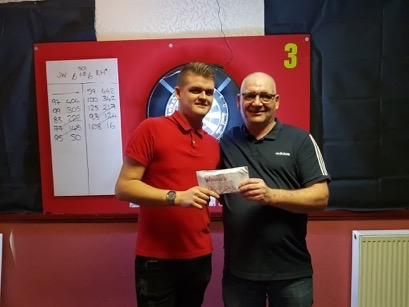 Thousands of pounds was on offer as a weekend of darting action returned to Birmingham, with the likes of Kim and Ronny Huybrechts, Jermaine Wattimena, Australia’s Damon Heta, Kyle Anderson, Brazil’s Diogo Portela and Jamie Hughes amongst those involved.

Hayden was a somewhat surprise winner in a star-studded field, narrowly denying the Netherlands’ Wattimena 7-6 in the final.

The 25-year-old began his campaign with successive 4-3 victories over Graham Hall and Connor Arbury, before thrashing the Aussie, Rob Modra, to seal his place in the last 16.

Having traveled down from Bradford for the tournament, Hayden then found himself in the quarter-finals following a 5-3 win over Coventry’s Ian McFarlane.

Colin Osbourne and Steve Hine were subsequently on the wrong end of 6-4 loses at the hands of the 25-year-old as he booked his place in the final – where he fought past Wattimena to clinch the £1,200 top prize.

A day prior to his triumph, Hayden was aptly defeated by Wattimena in the second round.

It was Stourbridge’s Nick Fullwell who reigned victorious on Saturday, after seeing off Brian Dawson at the final hurdle.

The 50-year-old, who often hoovers up titles in and around the Birmingham area, enjoyed wins over Bristol’s Ryan Palmer, Jack Wareing, Simon Edwards, Colin Osbourne and Scott Hope en route to the final.

Huybrechts all but made up for his early exit on the Saturday, reaching the quarter-finals on Sunday, only to lose out to eventual runner-up Wattimena.

There was also a monumental occasion in Birmingham as David Pallett nailed the nine-dart finish during his second round match against Luke Smith.

The two ladies’ titles were both won by Evonne Taylor – who saw off Chris Savvery and Jackie Maiden in the respective finals.

Birmingham Open organiser, Stephen Pasetti has already confirmed a potential return for the popular double-header during the 2020 festive period.

Great comp over in Birmingham yesterday run by the main man spag, great day and a fantastic attendance by world class players, even bagged myself a cheeky 9darter in the second round. ?