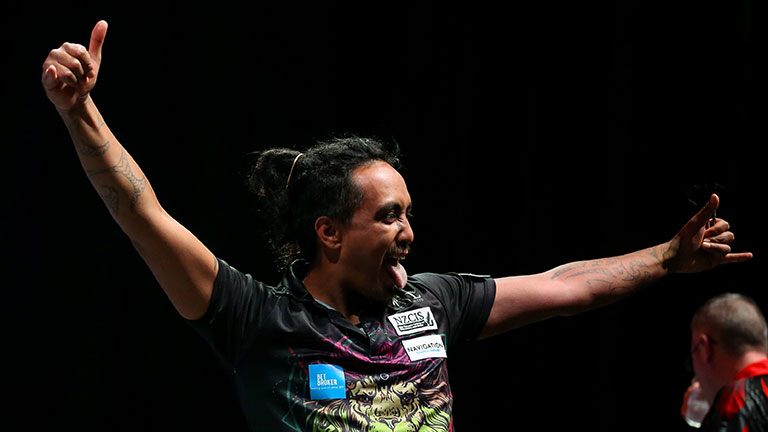 New Zealand’s Darren Herewini took five points from six as he propelled himself up the table on an entertaining night seven in the second Remote Darts League.

‘The Apocalypse’ had lost all three games in his opening appearance in the competition but he was much better on Sunday, drawing 5-5 with Richard Veenstra before recording wins against Stacey Pace and Tony O’Shea.

All 10 legs in Herewini’s game with Veenstra went with throw in what was a fairly close encounter where both men scored well but struggled for accuracy on the doubles. The highlight of the game was Herewini’s 104 checkout to make it 3-3, while the Kiwi secured his first point of the tournament with an 18-darter.

Herewini’s averaged dipped almost seven points in his next game, mostly as a result of missed doubles early on, but the reigning WDF World Cup Singles champion had more than enough to see off America’s Stacey Pace. The opening two legs went with throw, Pace winning just her second leg of the competition with a 19-darter, before the Auckland thrower broke throw in the third leg with a 17-darter. An 111 checkout followed in the fifth leg and from there it was essentially academic, Herewini wrapping up the win with a 15-darter.

After waiting five games for his first win, Herewini made the most of the winning feeling as he finished his evening with a 6-3 win over English veteran O’Shea. An early break of throw for the New Zealander and a 14-darter helped him open out an early 3-0 lead. Finishes of 87 and 121, his third ton-plus out of the night, on the bullseye helped Herewini move 5-2 up before O’Shea reduced the deficit to 5-3 with a regulation 15-darter. Herewini made sure of the win by taking out 32 in three darts after O’Shea had missed a dart at the bull to force a deciding leg.

Richard Veenstra finished second in the group on the night, beating Stacey Pace 6-0 with an 86.71 average before producing some magical darts to come from behind to draw with O’Shea.

‘Flyers’ held throw in the opening leg against the three-time World Championship runner-up but it was then all O’Shea as the Stockport man win four legs on the spin to open out a three leg advantage.

Not to be outdone, Veenstra then reeled off a four-leg streak of his own, hitting 121 and 132 finishes back-to-back and winning all four legs in just 50 darts. Many players would have been blown away by such a hot streak but O’Shea showed his mettle and years of experience as he checked out 46 for a 17-darter that secured a potentially all-important draw.

The Dutchman took out every double at the first time of asking in the legs he won, finishing with 5/7 overall in the game a tournament-best 96.98 average.

O’Shea finished the night with three points after he also whitewashed Pace in the evening’s opening game, finishing with two maximums, 40% on the doubles and an 88.4 average.