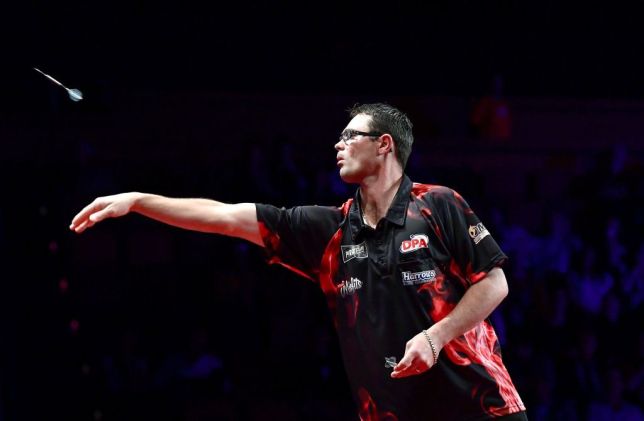 Damon Heta doubled his tally of PDC titles at Players Championship 15, beating a clutch of top players including world number one Michael van Gerwen on the way to £10,000 in Niedernhausen.

Tour rookie Heta missed July’s Summer Series due to travel restrictions, but made up for lost time with a run of excellent wins, taking him into contention for the World Grand Prix in Coventry and all-but securing his place at the World Championship.

In the events he had played, ‘The Heat’ had run into some very unlucky defeats, so will have been delighted for it to go his way and shoot him up inside the top 100 as a result.

The Australian was handed another tricky draw in the first round, but came through a tight clash with Scott Waites to set up a third meeting with Van Gerwen this year.

A 97 average was enough for a massive 6-4 win, before Heta steamrollered World Matchplay champion Dimitri Van den Bergh and edged past Ross Smith, who had previously put out Rob Cross.

In the quarter-finals, he saw off a resurgent Martin Schindler 6-3. Stephen Bunting, his last four opponent, had produced two 103+ averages previously in the tournament, but Heta took advantage of a drop in form for ‘The Bullet’ and ran out a 7-3 winner to book a place in his first PDC ranking final.

Joe Cullen was who he met there, and ‘The Rockstar’ was enjoying a much-needed deep run with his Grand Prix place in some jeopardy. He had averaged 109 in the last 32 against Daryl Gurney as well as 103 in a big win against top seed Gerwyn Price.

The final began with eight straight holds of throw, with both players taking out a three-figure finish, but Cullen started to miss doubles at the business end and ‘The Heat’, took advantage, sealing an 8-4 win for his first PDC ranking title, but it could end up meaning a whole lot more than that.

It was a day of important runs for players who needed them, with Mervyn King and Chris Dobey putting themselves right in the mix for Coventry in addition to the aforementioned Whitlock.

Kim Huybrechts and Madars Razma both made it to the last 32 to consolidate their places inside the qualifying positions.

Andy Boulton was one of the day’s form players in the first three rounds, posting three ton-plus averages against Toni Alcinas, Glen Durrant and Ryan Searle. However, he fell to a similarly excellent performance by Stephen Bunting.

Ricky Evans made it to a fourth last 16 of the year, while Croatia’s Boris Krčmar had another solid showing, winning three more games.

Ian White didn’t play his best all day, but came within a leg of the semi-finals, losing to Nathan Aspinall. The Premier League semi-finalist would’ve been disappointed himself after losing out narrowly to Cullen in the last four.

It was a disappointing day for floor specialist Krzysztof Ratajski, who lost in the first round of a Players Championship event for the first time this year, while Daryl Gurney, Dave Chisnall and James Wade all fell before the last 16.

Peter Wright’s heavy defeat in the fourth round to Whitlock signified another £1,500 pay check, but a frustrating one for the World Champion given his incredible record on the ProTour in 2020.

However, the day belongs to Damon Heta, whose decision to base himself in Europe has paid off with a fantastic win that will be worth more than just £10,000 in ranking money.

The Autumn Series reaches its halfway point on Monday with Players Championship 16.