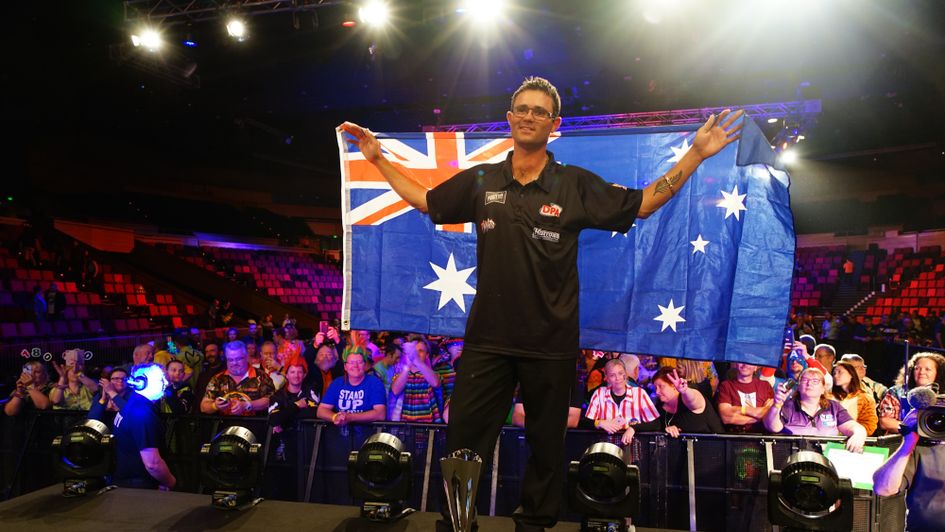 Damon Heta was crowned Brisbane Darts Masters Champion in dramatic fashion, as he edged out defending champion, Rob Cross 8-7 in a pulsating final in front of a partisan home crowd at the BCEC on his 32nd birthday.

“The Heat” came through three established highly ranked PDC Champions in one day to win the trophy.

After coming through a 6-5 first round nail biter against James Wade on Friday, Heat backed up his feat by beating two time World Champion, Gary Anderson, 8-6 in the last eight, with a steady 92.52 average seeing him home.

The semi finals saw the Perth man face compatriot Simon Whitlock for a shot at the title. Whitlock had earlier whitewashed another Aussie in Kyle Anderson, romping to an 8-0 win with a 102 average.

Whitlock went 4-1 up in the last four, before Heta reeled off five legs in a row to take charge of their contest, eventually sealing another 8-6 win to reach a maiden PDC final.

Heta’s opponent in the final would be Rob Cross, who was coming off an 8-4 win over Raymond van Barneveld in the quarter finals, before hammering Daryl Gurney 8-3 to reach the final with an impressive 105 average.

Gurney had yet again sent Michael Van Gerwen packing in the quarter finals, ousting the world number one with an 8-5 win, but “Superchin” was no match for Cross, who was rampant in their semi final affair.

It was left to Heta and Cross to contest the final, in what was meant to signal the end of the fairytale, but Heta again didn’t read the script.

The crucial blow was landed by Heta from 202 in the final leg, as he nailed two treble twenties and the bullseye to leave 32.

Cross was unable to checkout from 142, leaving Heta three darts for an unbelievable win. The 125/1 outsider before a dart was thrown in Brisbane duly obliged with his second dart to send the crowd into raptures.