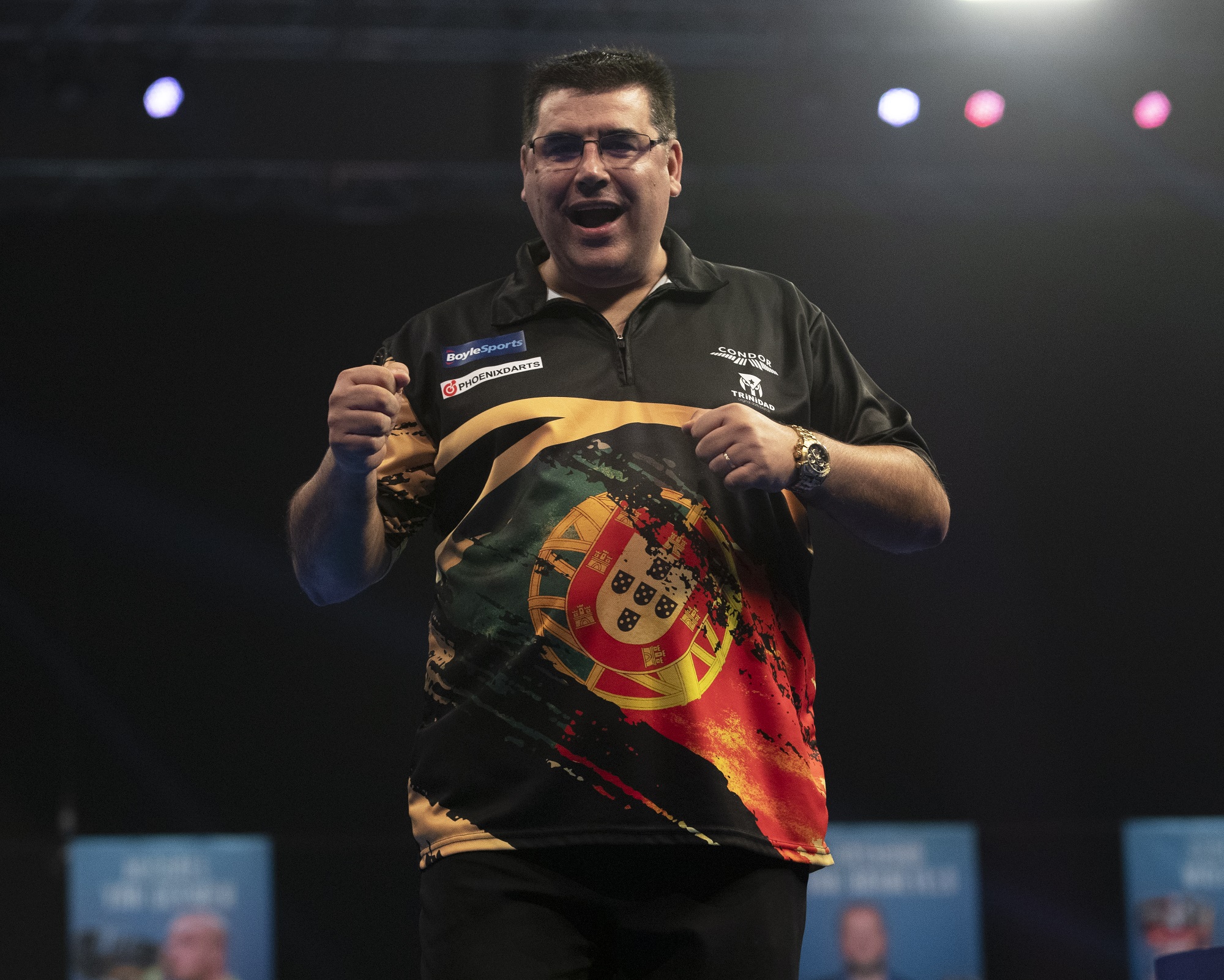 Portuguese debutant Jose de Sousa will face James Wade in the Grand Slam of Darts final as both players came through scintillating semi-finals on Monday at Coventry’s Ricoh Arena.

It was a thrilling evening in the West Midlands, filled with darting drama from the outset, with a rookie and a multiple-time major champion set to clash in Tuesday’s finale.

De Sousa has rocketed up the rankings in his two years as a professional, placing Portuguese darts firmly on the map, and continued to create history in becoming the first player from his country to reach a major final.

The 46-year-old was visibly ecstatic but emotional as he landed a 16-12 victory over Simon Whitlock, less than a day after the Australian overcame world number one Michael van Gerwen.

Both players converted maximums in the opening leg, with Whitlock immediately gaining a break of throw with a clutch 82 checkout on double tops.

Portugal’s De Sousa claimed two of the next three to head into the first interval marginally adrift of his opponent, though, Whitlock continued to register 180s with alarming regularity to construct a 5-2 advantage.

Three treble-less visits in the tenth leg allowed the Australian to regain his two-leg advantage, but more brilliance from De Sousa turned the tie on its head.

De Sousa showcased some spectacular stuff in the third session of the contest, including a phenomenal double-double finish on 92 to open up an 8-6 lead.

Whitlock then pinned a superb 76 checkout with his last dart in hand to avoid a three-leg deficit transpiring, before trademark miscounting and spurned doubles from De Sousa allowed the major champion to level up proceedings at eight apiece.

Jose De Sousa once again miscounts, busting 126 by taking out 136, but he gets away with one there clinching the leg and he narrowly leads 9-8!

‘The Special One’ continued to produce spectacular things, however, as the Madrid-based ace claimed four of the next five legs, including a mesmerising 121 checkout, to move 12-9 in front.

De Sousa pressed on and mounted his charge towards the biggest victory of his professional career, with finishes of 99 and 121 on the bullseye helping him move on the brink of the final.

There were nerves as the finishing line approached as the Portuguese sensation squandered five match darts, but his dreams eventually came true as he pinned double 16 to progress.

Similar to Whitlock, Belgium’s Van den Bergh immediately broke the throw of his opponent, converting a magnificent 160 outshot in the opening leg.

The reigning World Matchplay champion claimed two of the next four legs to open up a 4-1 lead heading into the first interval, and added to his advantage with a 13-darter on his favourite double 18.

Wade then executed a crucial 42 combination checkout to marginally reduce the deficit, before ten consecutive holds of throw followed, with Van den Bergh carrying his hefty lead into the latter stages of the contest.

The Belgian would hold the ascendancy at 10-6, but three legs in succession, including a pivotal break of throw, moved multiple-time major winner Wade within one of his opponent.

As the tables appeared to be turning, Van den Bergh found a purple patch in form to reel off three of his own, clocking legs of 18, 15 and 11 darts to re-establish his four-leg cushion.

The world number eleven’s standard soon dipped slightly in a rollercoaster encounter, allowing Wade to capitalise and reduce the arrears to just a solitary leg once again.

Wade subsequently won two of the next three legs to level up proceedings at 14-14, with Van den Bergh being left to rue multiple squandered attempts on the outer ring.

It was now appearing that the pendulum was now swinging in Wade’s favour as both players completed break of throws to force a deciding leg, in which the multiple-time major champion would have the darts.

The hopes of Van den Bergh were quite literally dismantled by Wade in the decider, as ‘The Machine’ left 76 after just nine darts, before pinning double four to prevail.

Wade will have aspirations of lifting an eleventh major accolade on Tuesday evening, though, the plucky Portuguese De Sousa will have other ideas.