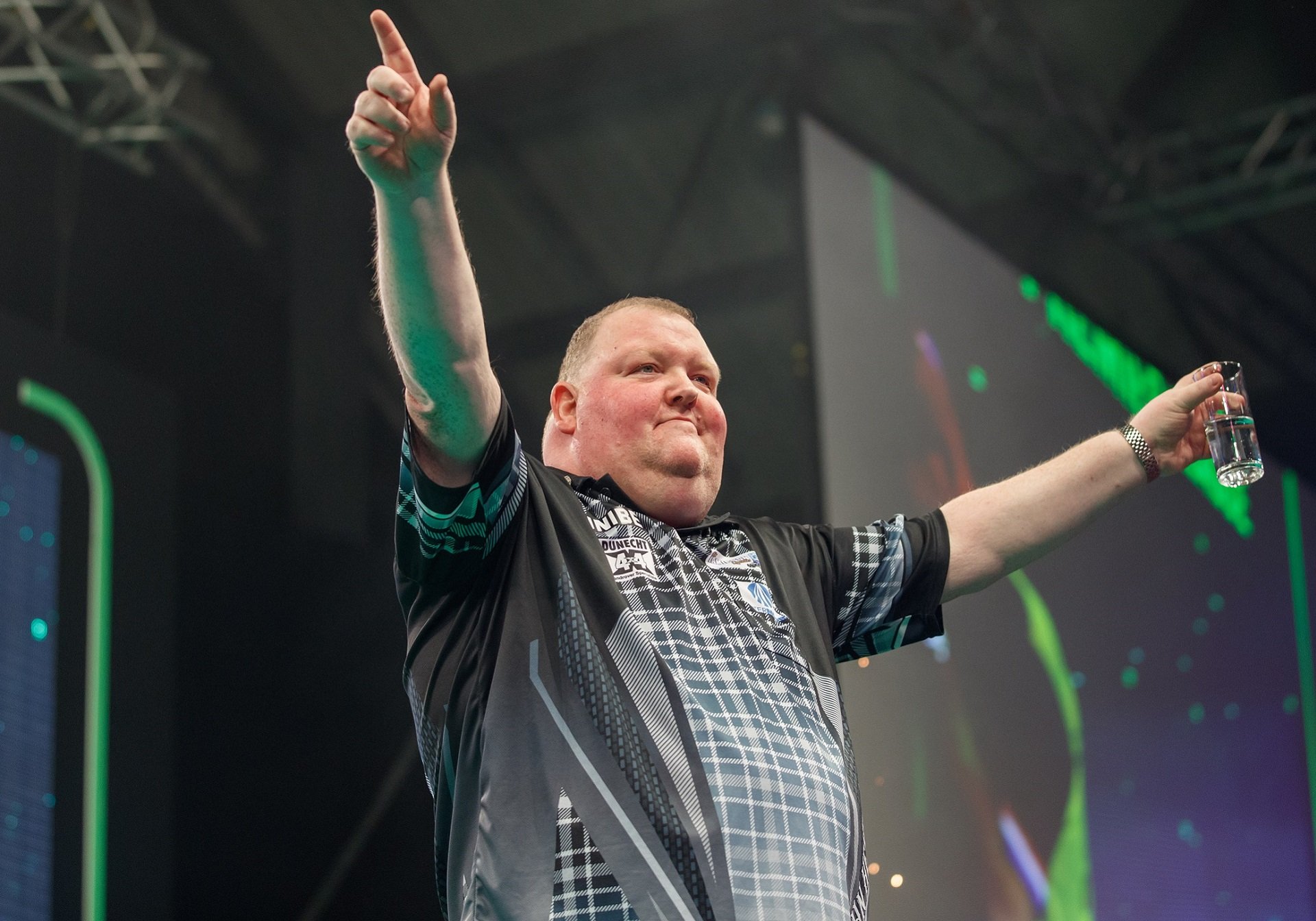 Scotland’s Number 3 John Henderson came from behind to earn a draw against Michael Van Gerwen on Thursday night in Aberdeen, a night which also saw James Wade whitewash Daryl Gurney 7-0 with an average of 110!

Henderson, the 5th contender out of 9 to take part in this years Premier League, had arguably the toughest test in taking on the World Number One Michael Van Gerwen. Van Gerwen stormed into a 3-0 lead including two 13 darters and a 15 darter before Henderson won his first leg on Double 10 for a 14 darter. Then there was back to back 12 darters from both before 13 darter from MVG to move into a 5-2 ahead. Henderson then won back to back legs to cut the gap to one leg before MVG took out Double 16 for a 6-4 lead to earn himself a point before back to back 14 dart legs for Henderson to earn himself a point in front of a 4,000 packed crowd in Aberdeen.

James Wade followed up his impressive win over Michael Van Gerwen last week with a stunning 7-0 win over Daryl Gurney. An average of 109.59, 78% on doubles and 2 ton plus checkouts and winning the match in just 96 darts and only giving Daryl just 2 darts at a double.

Peter Wright secured a 2nd win of the campaign defeating out of sorts Raymond Van Barneveld in the 4th game of the night. Wright, who lost in Exeter last week 7-4 to Mensur Suljovic, produced a phenomenal performance in beating Barney with an average of 106.64, 3 180’s and 50% on doubles.

Rob Cross, last Sunday’s UK Open Finalist, won his 3rd game in the last 4 by beating Michael Smith in the opening game of the night. Four straight holds of throw from the pair before Cross took out a crucial 164 checkout to break throw and go 3-2 ahead and from then on was in complete control winning 3 straight legs to make it 6-2 before Smith took out a 90 checkout on the bull to make it 6-3. A 15 darter sealed the win for the World Number 2 with an average of 103.96 and 54% on doubles.

Man in form Gerwyn Price continued his unbeaten start to the 2019 Premier League with a 7-3 over Mensur Suljovic. Price, who’s recently won back to back Pro Tour Events and a run to the UK Open Semi Finals, secured his 2nd win of the campaign hitting 2 ton plus checkouts, 78% on doubles but only a 93.13 average.

The Unibet Premier League continues next Thursday with newly crowned UK Open Champion Nathan Aspinall being the next contender as he takes on Michael Smith. The Night also sees Gerwyn Price take on Michael Van Gerwen.