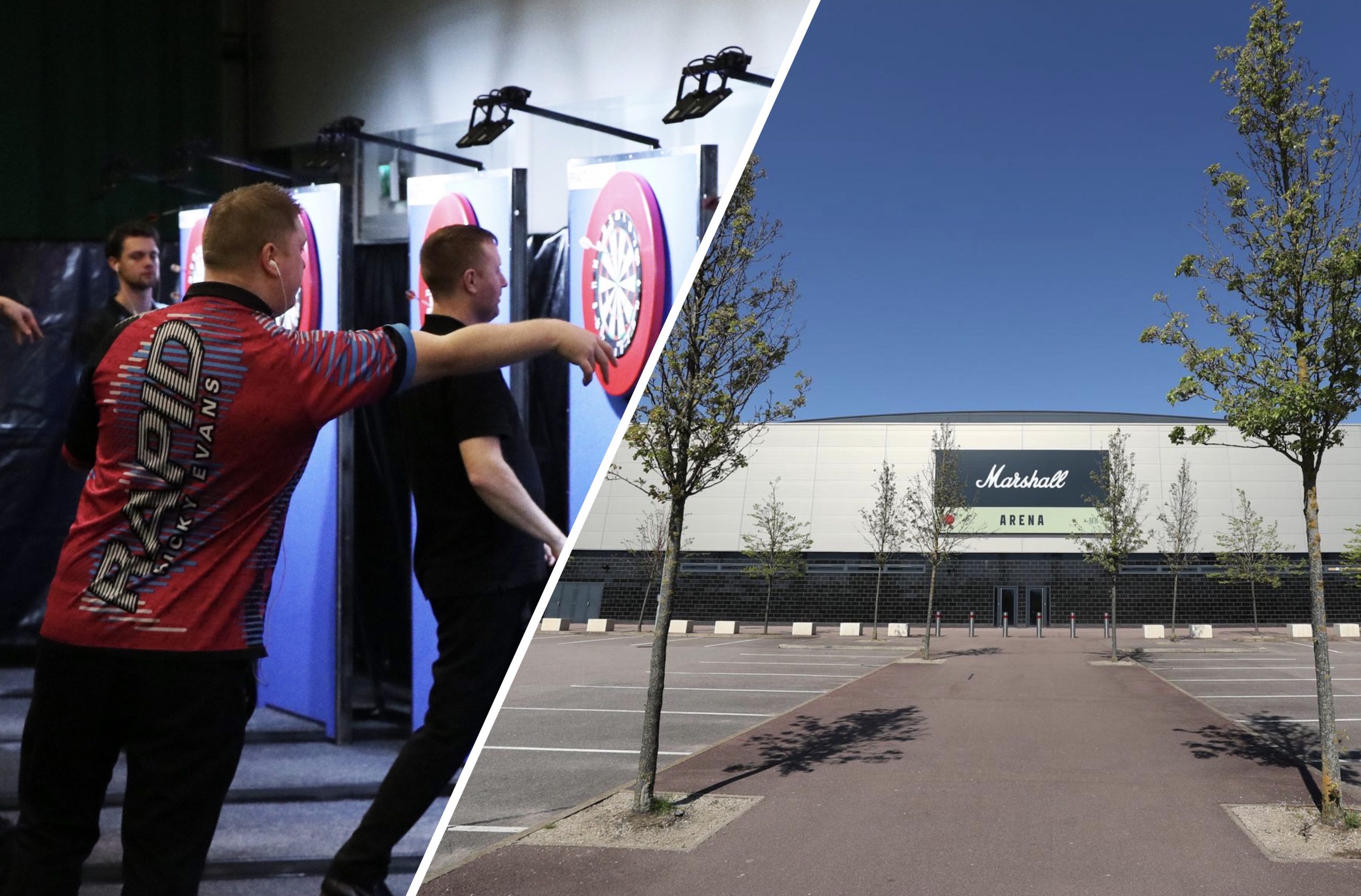 The anticipated return of professional darts looms ever closer, however, despite the concept of each tournament remaining identical, there will be many differences to what is usually considered an ordinary PDC ProTour weekend.

Since the success of both Ian White and Nathan Aspinall in mid-March, competitive action has been scuppered at the hands of the coronavirus pandemic aside from the fruitful but remotely contested Home Tour.

Tour card holders joined the broadcast and participated from their kitchens, bedrooms or man caves in an attempt to keep their competing juices flowing, though, the stars of the sport will now travel to Milton Keynes for the awaited return.

The Marshall Arena in the heart of Milton Keynes (Photography: MK Citizen)

Upon arriving to the Marshall Arena, all 128 players, consisting of 117 tour card holders and 11 from the PDC Challenge Tour, will receive a compulsory test for Covid-19 before being allowed to enter their hotel room.

They will subsequently be enforced to self-isolate for approximately 12 hours until their results are received. If, as expected, they obtain a negative result, they will be allowed to prepare for the opening tournament, whereas if their test proves positive, they will be evicted immediately.

Following the delivery of a negative result to their hotel room, players will be under strict procedures and therefore forbidden to leave the venue for any given reason. Social distancing rules and other guidelines must be adhered to at all times.

The draw for each of the five tournaments will be released at 9am via the DartConnect system, differing from the usual 11am, in order to provide players with enough time to digest their playing location and the practice board they have been assigned to.

Each competitor will be handed a designated practice board on the second level of the Marshall Arena – a floor above the match cubicles where the streaming boards will also be located.

Each of the 32 match boards will include two tables, instead of the usual one, to keep players one metre apart at all times, and the accustomed voluntary markers will not be in action, with players being forced to mark matches.

Despite minimal markers being present to chalk the streamed matches, the boards away from the cameras will see players referee games on a loser marks bases, similar to the way the Challenge Tour and Development Tour currently operate.

The more methodical players, such as Glen Durrant and Mervyn King, could significantly benefit from another amendment which has been put in place. Players will now be unable to approach the oche until their opponent has retrieved their darts and moved one metre away.

This suggests that players like Gary Anderson, Gerwyn Price and those who exploit a more rhythmic affair could struggle slightly in adapting to the new surroundings, compared to the aforementioned meticulous throwers.

The outline of the redeveloped and regulated playing cubicles (Photography: Matthew Edgar/YouTube)

According to PDC professional and internet sensation Matthew Edgar, any player who chooses to ignore or fails to obey the regulations could be docked the leg, and persistent rule breaking will lead to that player forfeiting the match.

A referral to the Darts Regulation Authority (DRA) will also be sanctioned by the Players’ Marshal, with an extra workload being placed on the shoulders of Dean Williams and ProTour Manager Keith Bisby.

Following the culmination of their matches, players will either return to their designated practice area if they progress further in the tournament, or depart the playing arena immediately and return to the players’ hotel if they are defeated.

Unlike the considered normal Players Championship events, players will be unable to stay within the playing venue and follow the progress of their fellow professionals.

In spite of a comprehensive nine-page document detailing rule changes and the regulations that should be adhered to, the return of our sport is welcomed.

A Grand Slam of Darts spot for the winner of the PDC Summer Series Order of Merit should make for extra competitiveness and overall an enticing five days of action in Milton Keynes.