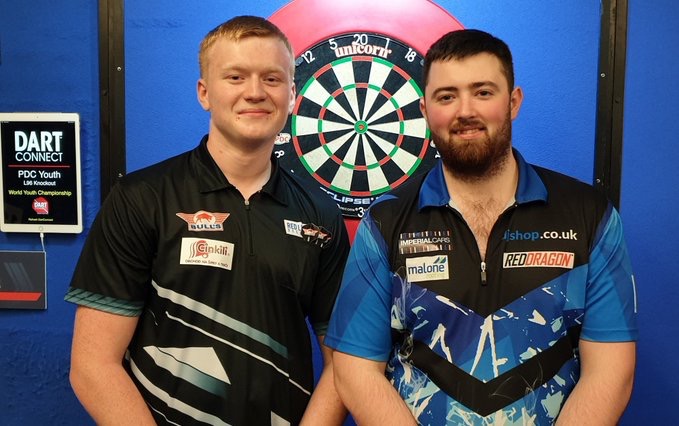 Luke Humphries and Adam Gawlas will contest the World Youth Championship final at Butlins Resort in Minehead after coming through Monday’s early stages in Wigan.

Players from New Zealand, Japan, Australia and China were among the 96-man field in Wigan, with the final being played during the 2019 Players Championship Finals on November 24.

17-year-old Gawlas defeated both Dan Read and Rhys Griffin in the group stages, before beginning his knockout campaign with a 6-4 win over German Darts Open champion, Max Hopp.

Gawlas thrashed Harry Ward 6-2 with his most emphatic performance of the day, averaging 96.4 to book his place in the quarter-finals.

A comfortable win over Challenge Tour winner Callan Rydz followed, before he sealed his spot in Minehead, with 6-3 win over Ryan Meikle.

As for Humphries, who lifted two Development Tour titles at the weekend, he survived match darts in the first round of knockout, after seeing off China’s Xiaochen Zong and Keelan Kay in the group stages.

Humphries edged out Berry van Peer and his 104.5 average, before adding to his Dutch scalps with a 6-3 win over Niels Zonneveld.

Despite leading 5-2 in the quarter-finals, Humphries was forced to deny a valiant comeback from Jeffrey de Zwaan – who he defeated narrowly in a deciding leg to move on the cusp of the World Youth Championship final.

Keane Barry was next to be ousted by Humphries, as ‘Cool Hand Luke’ clinched his place in the final, averaging 94.4 in a comfortable victory.

Barry will meet Gawlas in the JDC World Championship – which consists of under-18 throwers only – and come December we could have both finalists at the PDC World Darts Championship.

Gawlas has also become the first Czech darter to qualify for the Grand Slam of Darts, while Humphries will join him in making his Wolverhampton debut.

Elsewhere, 2018 finalist Martin Schindler departed in the quarter-finals at the hands of Meikle, while 12-time Development Tour winner Ted Evetts’ hopes were ended in the second round of knockout.

James Beeton, who landed a nine-darter during the Development Tour finale, exited in the first round at the hands of Mike van Duivenbode after coming through a group containing Shane McGuirk and fellow 16-year-old Brad Phillips.

The World Youth Championship final will take place on Sunday, November 24 in Minehead between the semi-finals and final of the Players Championship Finals.