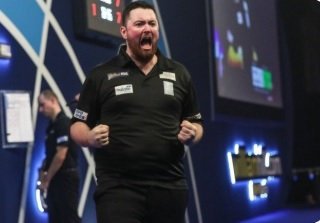 Luke Humphries produced the latest shock of the 2018/19 William Hill World Darts Championship in coming from 2-0 down to become the first player to beat Rob Cross on the Alexandra Palace stage, while James Wade was also knocked out on day thirteen as four unseeded players (including Humphries) booked their places in the last eight.

‘Cool Hand’ capitalised fully on a slight dip in form from the Hastings man, and just when it looked like Cross had got a foothold back into the game, Humphries reeled off three legs in 39 darts to set up a quarter-final meeting with Michael Smith, who may never get a better chance to reach a world final. The result ensures Michael van Gerwen will enter the 2019 season as world number one, but that will be overshadowed as Friday’s evening session saw three high-quality encounters to follow on from a trio of closely-matched battles in the afternoon on the day that the quarter-final line-up was confirmed.

The day began with two of the many outsiders in the latter stages of the tournament – Nathan Aspinall, who’s victims included Gerwyn Price and Kyle Anderson, took on Devon Petersen, who came through thrillers with Wayne Jones and Ian White and saw off Steve West in style in the last 32. It was the South African who continued his resurgence after a very poor year on the Pro Tour, winning six of the first seven legs against an out of sorts Aspinall to take a two set lead.

However, the second break seemed to spark the Stockport thrower into life with ‘The Asp’ capitalising on three missed set darts from Petersen to storm to the third set. This ended up being the eventual turning point, but Aspinall had to come from behind once more in the fourth stanza, though he sealed it with a fine 12 dart leg. ‘The African Warrior’ kept asking questions of the Players Championship 18 winner, but he kept coming up with the answers, pinning double 12 for a 3-2 lead with Petersen also sat on a double.

However, the former UK Open quarter-finalist seemed to be calling on his comeback experience from previous rounds and took the sixth set 3-1. After the first four legs of the deciding set were shared, the match was sent into a tiebreak scenario, but unlike he did against Ian White, Petersen didn’t find his form at the crucial times and could only hit two ton-plus scores in the tiebreaker.

Aspinall punished him to the full extent, finishing a thrilling match with a 13-darter. The ‘quarter of life’ would see another surprise quarter-finalist come from the next match to take on ‘The Asp’ in Saturday’s last eight – either Brendan Dolan or Benito van de Pas. The Northern Irishman was the clear favourite despite his inferior ranking with a better year being backed up by better performances on the Ally Pally stage so far.

Although he wasn’t quite producing the darts that got him this far, Dolan eased into a 3-1 lead over ‘Big Ben’, being first to a double in almost every leg and being allowed three or four darts to finish each leg off. He seemed to be moving into top gear at the end of the third set, taking out 148 and 107 in consecutive legs to take a 3-0 lead, only for the Dutchman to produce a much better set four to close the gap.

Van de Pas proceeded to take a 2-1 lead in the fifth stanza, but ‘The Historymaker’ capitalised on a very poor deciding leg in said set from the former two-time World Grand Prix quarter-finalist, being allowed 21 darts to take the match 4-1 and set up a quarter-final with Nathan Aspinall. The final game of the afternoon session saw attentions turn to the more difficult, but much depleted top half of the draw with James Wade taking on Ryan Joyce.

Wade had come from behind twice in his two games so far, but not without controversy, while Joyce was continuing his form from 2018 in going under the radar, although still producing some very notable scalps along the way. It was a very scrappy start to the match from both players, although ‘Relentless’ punished a 76 average from the Aldershot man in the first set to take the initiative.

‘The Machine’ recovered in style in set two, though, winning his legs in 12, 13 and 12 darts to level the match, before surviving some key missed doubles from Joyce to help him on his way to a 2-1 lead. However, Wade’s form deserted him once more in the fourth set with Joyce allowed to ease to a 3-0 scoreline. It seemed like the ten-time TV champion wouldn’t require a miraculous comeback this time when he took the fifth set in straight legs, but he inexplicably missed five match darts to win it 4-2 and the Newcastle man sent it all the way.

Joyce broke the throw in the third leg to throw for the match, and despite a typical Wade leg, leaving double 18 after 12 darts, once again the finish eluded him and ‘Relentless’ found the double with his last dart to continue his fairytale first year in the PDC and set up a quarter-final date with Michael van Gerwen, who appears to be in scintillating form, similar to the performances that saw him storm to his second world title this time two years ago.

Despite having high amounts of drama, Friday’s afternoon session was perhaps lacking the high-quality and stunning darts that we’ve come to expect at this stage of a World Championship. However, with Michael Smith, Rob Cross and Dave Chisnall amongst others to come in the last three games of the last 16, there was a chance of the standard being upped significantly and that’s exactly what happened.

Another surprise package, Ryan Searle, took on Smith in the first game of the night and more than held his own until a stunning three-leg spell from the Premier League finalist, topped off by a 12-darter won with a 130 checkout saw him take a 2-0 lead in sets. The highest set average of the tournament was to follow, two 11-darters taking ‘The Bullyboy’ to the verge of his second Ally Pally quarter-final appearance.

However, Searle continued to plug away with his best average of the tournament so far, despite the scoreline, and it paid off in set four – Smith missing two match darts and the man from the south-west reducing the deficit to 3-1. He then took a 2-0 lead in set five, but Smith’s quality showed once more as he found 13, 15 and 15 darters to kill the match off and come through another test. He will find himself in a world final for the first time if he can see off two unseeded players – what a chance for the man from St Helens!

Dave Chisnall appeared to be heading out of the tournament in his first game, unable to do much about a stunning performance from Josh Payne, but he turned that around to win 3-2, before seeing off Kim Huybrechts 4-0 to set up a meeting with Jamie Lewis. ‘Chizzy’ started on fire, averaging 107 in the first two sets to win his eighth and ninth consecutive sets at the Palace.

‘Fireball’ still managed to win three legs in that spell, but he couldn’t capitalise when the former Lakeside finalist’s level dropped, missing four set darts to halve the deficit. Chisnall then returned to somewhere near his best in set four and sealed the match and a second consecutive whitewash win, something of a rarity in this year’s World Championship, on double 10. He’s now through to a second Ally Pally quarter-final, and it will be a re-match of his last appearance, which saw him lose in a thriller to Gary Anderson.

The final game of the night saw reigning champion Rob Cross looking to win his ninth match in a row on the world stage after an average year on tour, but he continued his ton-plus average from his first two games to ease into a 2-0 lead over rising youngster Luke Humphries. He was relying on big checkouts to get the job done, though, and ‘Cool Hand’ saw his own luck turn in a high-quality third set as ‘Voltage’ couldn’t find his ‘A-game’ and the Newbury man picked out a crucial 115 finish.

114 and 64 outshots continued the theme in set four, with the usually reliable Cross unable to pin the doubles. A level game soon became a lead for Humphries as his incredible consistency continued, seemingly winning almost every leg in 14 or 15 darts. Perhaps the pressure appeared to get to him in the first leg of the pivotal sixth set as he missed three darts to go to legs away from the last eight, but he reeled off three straight legs, only needing 39 darts to see off the World Champion and continue this tournament of upsets.

We’ll next see ‘Voltage’ at the Premier League and the Masters in early 2019, but before then the PL line-up is still to be decided, with a lot of it hinging on the final three days of action at Alexandra Palace. Stay tuned to dartsplanet.tv to see if any more upsets will happen or whether Michael van Gerwen will do as expected and lift the Sid Waddell Trophy for a third time on New Years’ Day.