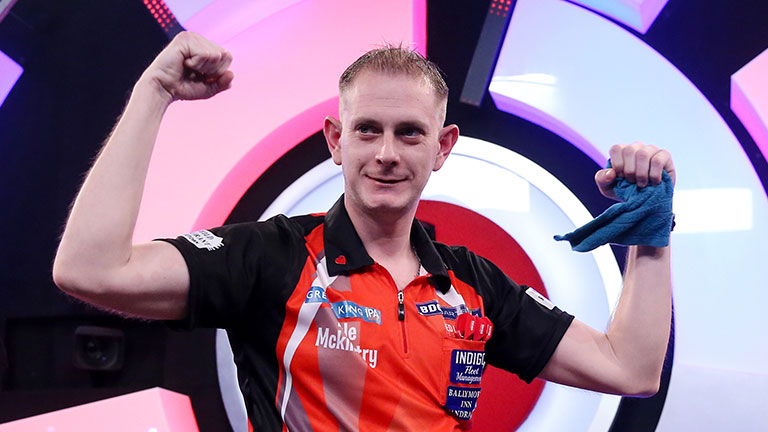 Hutchinson does double as McKinstry and Barry also triumph in Newry

Irish teenager Keane Barry and Kyle McKinstry won the men’s events in Newry as Kirsty Hutchinson did the double in the first BDO ranking events of the new season.

McKinstry carried on his title-winning form from the PDC Challenge Tour last weekend to pick up the Northern Ireland Open title courtesy of a 6-5 final win over Berkshire’s Jason Heaver.

‘The Village Man’ saw off Ciaran Teehan in the semis before meeting Heaver, who was playing in his second BDO final in six days after recording a comfortable 6-1 semi-final over Brazil’s Diogo Portela.

Heaver led regularly in the final and had two darts at tops to win the match but his misses were punished by McKinstry, who took out 56 to win the tournament in Newry for the second time. It was a first BDO ranking title in 16 months for the Northern Ireland international, who pockets £2,000 for his second NI Open win.

17-year-old Keane Barry then wrapped up the weekend’s proceedings by triumphing in the Northern Ireland Matchplay, a new Category B competition for this season.

Barry saw off the likes of Allan Edwards and David Evans and regularly averaged over 90 on route to the semi-finals, where he beat the Welshman Mike Warburton 6-2 in a high-quality game.

‘The Dynamite’ then beat Paul Hogan by the same margin in the final to win his maiden BDO ranking title, finishing the match with a superb 124 checkout. It was a first final since last year’s Lincolnshire Open for Hogan, who had beaten Francis Carragher and former PDC tour card holder Mick McGowan earlier in the tournament.

While the performance of Barry will undoubtedly steal the headlines, the weekend was also notable for the two nine-darters hit. The first came in the last 256 of the Open, when Warren Penney achieved the perfect leg in a 4-3 defeat against Alan Kerr, with the second nailed by young Liam Gallagher in his Matchplay defeat in the round of 128 to England’s Kevin Thoburn.

Gallagher, who will meet Barry in next weekend’s Tom Kirby Memorial Trophy final for a spot at the PDC World Championships, had impressed in the Open by reaching the last 16 by beating top seed Dave Parletti.

In the ladies competitions, Kirsty Hutchinson picked up the second and third titles of her career with victories in both the Open and Matchplay.

Both ladies Open semis went down to a deciding leg, with Finland’s Kaisu Rekinen beating top seed Laura Turner 4-3 and Hutchinson seeing off Denise Cassidy by the same scoreline. In the final though, Hutchinson was ruthless, whitewashing her opponent 5-0.

Although not quite as dominant on the Sunday, Hutchinson still had enough to beat Cassidy 5-2 to complete an impressive weekend double.

The weekend’s festivities began on the Friday with the pairs competitions, which were won by Adam Smith-Neale & Simon Stainton and Paula Jacklin & Laura Turner.

MVG Survives A Scare As Seeds Advance At Grand Prix